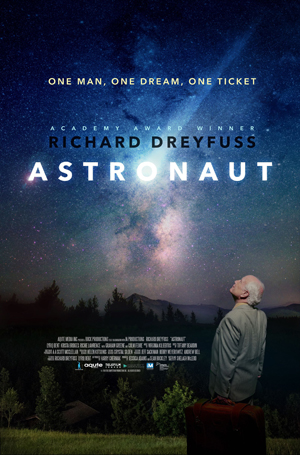 I saw my second movie of the day of July 14 in the Fantasia screening room, where critics can watch a movie on a large computer monitor at a time convenient to their schedules. And indeed scheduling had brought me to the screening room to fill a gap between two other films I wanted to see. Note then that I did not see the film I’m about to describe in a theatre; I don’t think the way I watched it affected my reaction, but it’s perhaps best to give it the benefit of the doubt.

Astronaut was written and directed by Shelagh McLeod. It stars Richard Dreyfuss as Angus, a 75-year-old widower and former geological engineer who moves into an old age home shortly after the film starts. An amateur skywatcher, he also enters a contest for a spot on a private spaceship built by tech mogul Marcus (Colm Feore) — and wins, despite being ten years over the cut-off age for contestants. Will Angus fulfill his lifelong dream of going into space? Or is he too old? Or are there other problems lying in wait?

Let me begin with something good: Richard Dreyfuss is excellent. He’s thoroughly convincing as Angus, and engaging enough to carry the movie for quite a while, even in the absence of other positive aspects. The supporting cast is generally fine, especially an almost unrecognisable Graham Greene as Len, a fellow resident of Angus’ retirement home.

There is a sense in which Feore is actually a weak link among the performers. This is of course not due to a lack of ability on his part. But playing a brilliant entrepreneur running a private space-flight company, he has to convince us that his Marcus is believable as a competitor to Elon Musk or perhaps Richard Branson, the sort of man who could be found in their company. And he doesn’t really get enough to work with. Marcus remains more plot device than character, presented in the film as a mature man of integrity and genius as well as the kind of charismatic figure who can draw both investment funding and media attention. There’s a lack of depth to him, no sense that some of his virtues might be in opposition to some of his other virtues.

In truth, that may be the least of the movie’s failings. The plot is a mess, relying far too heavily on coincidence. I don’t mean that it’s coincidental that Angus happens to win a random draw to become part of a group of finalists competing for the trip to space; a movie’s allowed one given, I think, and anyway if that sort of lottery-winning set-up is good enough for Charlie and the Chocolate Factory it’s good enough for Astronaut. But as the film goes on, it turns out that not only does Marcus’ spaceport happen to be very close to Angus’ home, Angus’ earlier career happens to leave him as the only person who could possibly know a certain piece of information vital to the launch of Marcus’ spaceship. 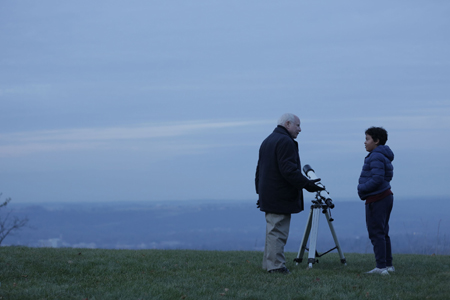 The further the movie goes along the more these problems become compounded. When Angus goes to inform Marcus of what he knows in a key scene late in the movie, he’s able to get past security guards and wander through a massive complex to interrupt the CEO of a major company in the middle of a meeting with key personnel. It’s difficult to suspend disbelief for a scene like that, which necessarily weakens the rest of the film by extension.

Thematically, the movie presents us with platitudes about the wisdom of elders. To work as a central idea, ‘respect for elders’ is fine but needs to be elaborated dramatically with more than the happenstance of one old man happening to know one piece of trivia that happens to be significant to the plot. It needs to be illustrated with more than trite scenes of seniors dancing to pop songs. It needs to be made real, and here it is not.

Angus’ burning desire to go into space needs to be made real, too, and despite Dreyfuss’ best attempts, that never happens. There’s a point where Angus is asked directly why he wants to go on the spaceflight, and he responds with a monologue; that’s fine, and it should be a key point in the film, a moment when the idealism of exploration and science comes home. It isn’t, though. The monologue’s too badly underwritten, filled with clichés about the Earth as a giant marble.

There’s no other comparable point, either, no moment when the film really seizes on spaceflight as an interesting thing in and of itself, a thing that would drive a man. Nor, come to that, is there any real explanation why earlier in his life Angus would turn from spaceflight to almost the most literally earthbound career it’s possible to have. Instead the drive to get into space becomes merely a reason to show his family rallying around him in unconvincing story beats familiar from a hundred subpar Hollywood tales. 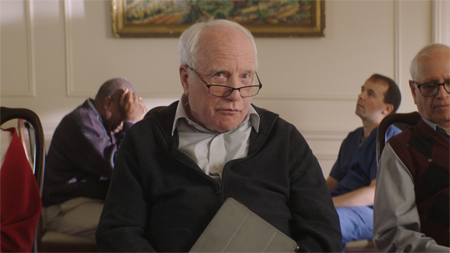 Visually the film’s as colourless and dull as its story. It’s not unpleasant to look at, and the wintry setting does go well with Angus’ situation in his winter years. But I felt it never established a particular visual identity, never did anything with the palette it set up. There is some colour in the night skies it shows, but just enough to make you wonder why it’s always cloudy during the day and clear at night.

It’s a disappointing film, and I find myself particularly exasperated by its familiarity. As a Canadian there’s a certain kind of Canadian story I run into too often; stories with a kind of defeatist pseudo-bleakness, a vague air of depression that substitutes for convincing dramatic movement. Defeat, bleakness, and depression can be powerful subjects for storytelling — but not when they’re unconvincing. Not when they’re evoked with the equivalent of a shrug and a resigned ‘oh well, that’s how life is.’

And thus this movie. There’s an attempt at a Hollywood tone and a Hollywood structure infused with a kind of middle-class Canadian defeatism. I was able to predict the ending early on, not because the film was setting up a kind of dramatic inevitability but because it would be the easy and obvious way to go. Astronaut is a professional-looking film that doesn’t talk about aging or death in any interesting way, and doesn’t talk about technology or space in any interesting way. A fine performance by Richard Dreyfuss is wasted on an inert mass of coincidence. I want to like the films I watch; I was utterly unable to find a way to enjoy this one.