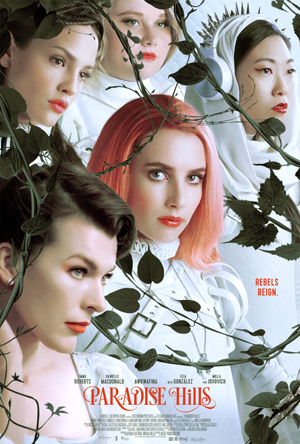 I saw my third film of Sunday, July 14, in the big Hall Theatre. Paradise Hills was introduced by director Alice Waddington, who spoke about her love for Lord of the Rings, Dungeons & Dragons, and The Neverending Story, and how she wanted to make something that reflected her and her friends. It was an interesting way to set up a fine film that continually did unexpected things.

Paradise Hills begins with a lavish wedding in what looks like the near future, a ceremony of the ultrarich in which the bride (Emma Roberts) sings to the guests about her intention to be submissive to her husband. As the bride and groom go up to their wedding bed, the film flashes back to two months previous, when Uma, the woman who we have seen as the bride, awakens in a kind of resort on a strange island. She finds her parents sent her there to get her to comply with their choice for her groom. The island’s filled with other young women whose upper-class families have sent them there to lose weight, or accept their career advice, or generally submit to their guidance. Uma, much more rebellious than in the opening sequence, is not ready to do that and gathers a group of equally disaffected women about her — Amarna (Eiza González), Yu (Awkwafina), Chloe (Danielle Macdonald). Their apparent antagonist and jailer is the malevolent ruler of the island, the Duchess (Milla Jovovich), who may have superhuman powers. But what is really happening on this island? What strange mind-games is the Duchess playing? And what will happen when Uma’s old boyfriend Markus (Jeremy Irvine) turns up in disguise?

Scripted by Nacho Vigalondo and Brian DeLeeuw from Waddington’s original story, the film’s a mad assemblage of striking ideas. Many of those ideas are visual. In writing about the film one almost has to begin with the costumes and setting. The women of the island resort wear surreal dresses whose references and symbolism are so dense as to be overwhelming. The resort itself is a gallimaufry of modernist architecture half-overrun by ivy and flowers. Everywhere and at all times the colours are highly saturated, but shadow and texture are used well, creating a sense of richness rather than garishness (usually).

There is a sense in which the movie’s like a consciously feminine take on the vocabulary of a Jack Kirby, with dresses instead of super-hero uniforms and curving organic plant forms instead of crackling energy-blasts. The comparison’s probably most apt in the way the film recalls Kirby’s intensity of vision, presenting a riot of creativity expressed through its own distinct idiom and design sense. It’s not just the outfits; it’s the bizarreness, the way a device that the masters of the island use to mess with Uma’s head takes the form of a carousel horse. 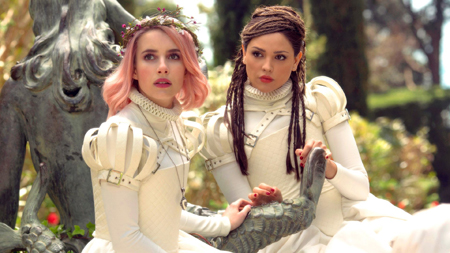 On which horse Uma must ride sidesaddle. The depiction of a kind of dystopia bent on producing female obedience is clear, with modesty and chivalry part of the means to that end. Uma’s already in rebellion against her parents’ will; to successfully rebel against the island, though, she has to come to understand what exactly is happening in that strange place, and how exactly she’s being controlled and programmed. While the movie hints at the nature of the outside world — the advanced technology of flying cars and holography, the extreme class stratification that leads the wealthy to create a sort of camp for the remaking of their daughters — it’s the eponymous island resort that is the main focus of Paradise Hills.

The movie seems to nod at any number of influences. The TV series The Prisoner. The comic Bitch Planet. Various dystopian YA novels, back to Lord of the Flies. Between the sheer visual exuberance and the range of potential references, it’s easy to consider the film as berserk, out-of-control. But, as with Kirby, I think that’s a mistake. I think it has a powerful imaginative logic and sense of story.

I think, in fact, it has a story that’s familiar in the way strong genre stories are familiar. It does unexpected things, and they connect up in familiar structural forms. There are well-turned twists and betrayals, as the story leads back to the opening scene which (as we have always known it would) plays out differently when we understand what is actually happening. Before we get there, the arch-villain displays a surprising power that makes thematic sense and has been unobtrusively foreshadowed. It’s all fine genre work. 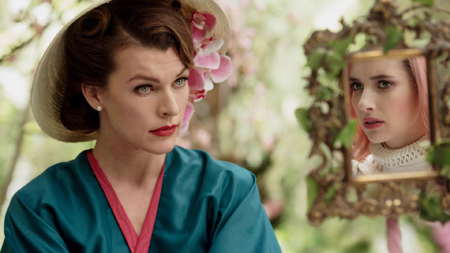 Thematically, the idea of expectations and emancipation are strong, and in fact always in the foreground in the way that genre stories tend to foreground their sense of right and wrong. What is happening in Paradise Hills the island is not exactly what we might imagine, a little bit more horrific, a little bit more extreme, but in its general drift it is clear what the place is and what it’s doing. There’s a directness, even at times a gleeful brutality, in the movie. Uma and friends fight directly when they can, run and sneak about when they must, and at all times are in a struggle for survival and for their own individuality.

I mentioned The Prisoner up above, and it’s very easy to see this as a version of that story with a specific emphasis on the threats and pressures women face in society. There is a similar blurring of reality, a similar sense of rationality turned inside-out. A similar sense of a community conspiring to reshape the individual into something more compliant.

Class dynamics are also key here. Unusually for a dystopia, Paradise Hills doesn’t focus on characters from the lowest rungs of society. The young women here are mostly representatives of the upper class, and the movie doesn’t ignore this. Crucially, the women here are not trying to liberate the oppressed masses; they’re trying to liberate themselves, which is both their immediate need and all they’re in a position to do in the course of this story. And it’s enough to be getting on with. 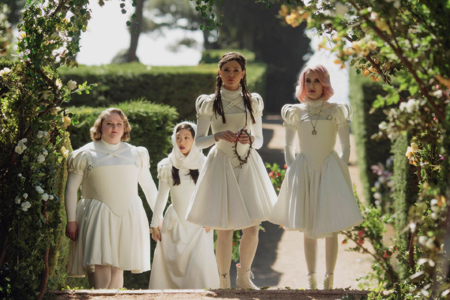 Among all the chaos on screen it would be easy for a performer to get lost. It’s to Emma Roberts’ credit that this never happens. Her Uma is always a sharp observer, visibly thinking, combining intelligence and combativeness in a tense confrontation with the world around her. She’s the right kind of hero for this story; and Milla Jovovich makes a perfect foil, sinister and decadent with a kind of classic-Hollywood glamour.

It is, in all, a fine and wildly creative suspense-adventure-SF movie. It’s full of weird twists and turns, with arresting visuals and surreal moments. It’s a story so packed with creativity it gives the impression of a whole world of further strangeness just offscreen, and so encourages us to imagine what more is out there. That’s a powerful accomplishment, and is perhaps the most imaginatively liberating thing in a film about liberation.

After the film, Alice Waddington took questions (what follows, as usual, is from hurriedly handwritten notes). The first was about the origin of the story and her motivation in making the film; Waddington said she worked on the story for half a year, wrote drafts in collaboration with another woman with screenwriting experience, and ultimately took the project to FantasticFest 2015 where she met Guillermo del Toro. That eventually led to bringing in screenwriter Nacho Vigalondo. Asked what the budget was that allowed her to make the costumes and world, Waddington said the budget for the film was just under $10 million, and it was made as an indie film in Spain with an entirely Spanish crew. 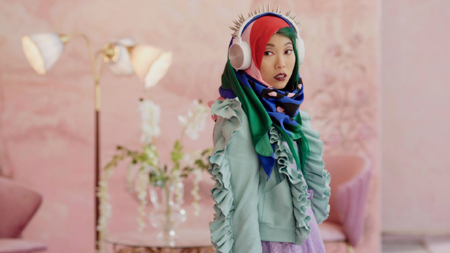 Asked about the process and how much input she had into the costumes and designs, Waddington said that she began collecting ideas in a non-narrative way, scrapbooking images with an emphasis on Victorian and Edwardian fashion. She began to develop a world out of that, suggesting an alternate world that went wrong. The story was built around dystopian schoolgirl narratives and tales of collective madness. The costumes should indicate restrictive times for women, and drew inspiration from fourteenth century corsets, Final Fantasy, Japanese Lolita fashion, and the ideas of modesty and the golden cage. Out of these references she built a world. Asked about her own background with fashion, Waddington said when she was younger she thought she would be either a war photographer or a fashion photographer. She studied fashion design, and moved from there to fashion photography and fashion film, making shorts that were abstract pieces without sound.

She was then asked about the movie’s mix of science fiction and what is apparently fantasy, specifically with reference to the character of the Duchess. She said that Paradise Hills is actually a fantasy film disguised as science fiction. She suggested that the world of the film might be either our world decades on or possibly an alternate timeline. Asked if she’d considered making the film in Spanish, she said yes, but all her references as a filmmaker were English, as were those of her parents, who she described as “film nerds;” she specifically mentioned Logan’s Run and Labyrinth. She found she imagined the film as English, and said that the main Spanish reference was the setting on an island in the Mediterranean, close to Spain. 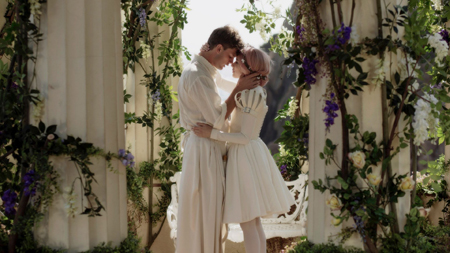 Asked about the resemblance of a certain character at a certain point to a certain Batman character, she admitted that at the start of each of her productions she told her coworkers that Joel Schumacher’s Batman and Robin was a great film, as she’d loved it age 5. One of the characters in particular had fascinated her, and became a kind of aspirational figure for her. Asked more generally about her experience as a woman in film, she said she identifies as genderqueer but that people read her as a woman. (Waddington’s Twitter profile states her preferred pronouns as “They / She;” since a pinned Tweet states that Paradise Hills is “dedicated to all the girls who grew up loving sci-fi and fantasy but never feeling like they saw themselves in it,” it struck me that the latter pronoun seemed more relevant for this write-up.) She spoke about her tween cousins, and seeing through them the insecurity being pushed on girls at that age and older, especially by means of the internet.

To a question about Danielle Macdonald and Macdonald’s previous movie Patty Cake$, Waddington said that watching that movie was the hardest she ever cried on a plane. She loved Macdonald, who was the first person to sign on to the film; she was grateful for the way she and her agent championed the film. Asked about the location of the film, Waddington said it was shot in the Canary Islands, mostly in two houses built in the brutalist style by two different architects. She noted that some scenes were shot elsewhere; for example the shots with the carousel horse were shot in a desacralised chapel, and the horse itself on a basketball court. 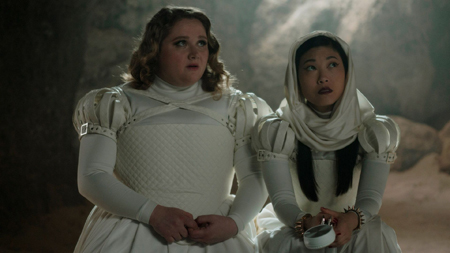 Asked by a member of the audience if she assigned Dungeons & Dragons character classes and alignments to her characters, she turned away from the crowd, knelt down, then stood up again and turned back and said “Yes.” She said she plays Basic D&D, but would always get killed. She liked the worldbuilding aspect of the game, and how it did not necessarily present a traditional narrative arc.