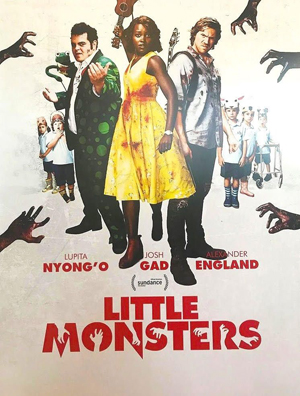 My second movie of Fantasia 2019 was in the 750-plus seat Hall Theatre. Little Monsters stars Lupita Nyong’o as a kindergarten teacher who takes her class on a field trip — only to get caught up in a zombie invasion. Written and directed by Abe Forsythe, it’s an occasionally tasteless but surprisingly effective horror-comedy.

The movie begins with an argument between a man and a woman, shown through a montage as one ongoing shouting match over months or years. Quick gags establish that she’s a high-achiever and he isn’t, and that she wants kids while he doesn’t. It’s funny and well-paced, a good way to start the movie and establish the lead character. After the relationship ends in a break-up we follow the man, Dave (Alexander England), as he moves in with his sister and does a terrible job of being a responsible mentor to his nephew Felix (Diesel La Torraca). When Dave falls for Felix’s kindergarten teacher, Miss Caroline (Nyong’o), though, he volunteers to help her lead the class in a field trip to a nearby petting zoo and minigolf course. Which happens to be next door to an American military base. Where the experimental subjects have just gotten loose. Those subjects are of course zombies, and when they swarm the nearby farm Miss Caroline and Dave have to do their best to save the kids — aided, abetted, and more often opposed by children’s entertainer Teddy McGiggles (Josh Gad, the voice of Olaf in Frozen).

It’s a solid comedy film. The jokes are inventive, most of them land, and they’re constructed well: there are set-ups you don’t notice and pay-offs you don’t see coming. This helps tie in the pre-zombie parts of the film to the main course. Themes running through the movie come to the fore under the pressure of action, too. Character is revealed in different ways at different points. Since the humour arises out of recognisable if exaggerated people doing roughly credible things, it’s surprisingly engaging. Add as well solid comic timing, and pacing that always moves quickly and lightly.

There are some jokes that are predictable. Young children are inevitably made to say or see something hideously inappropriate (though not in terms of their exposure to gore, which the movie does not use extensively). Dave’s a loser at the start of the film, so various jokes follow from that. Personally I could have done without seeing Asian tourists with cameras, though one might argue this was not blatantly playing to stereotyped tropes. 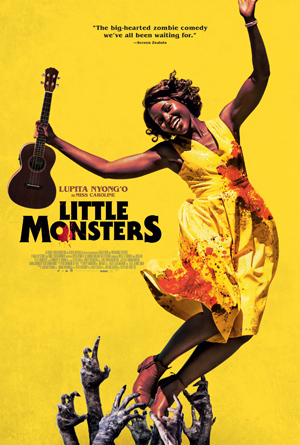 Still, the bad jokes are quickly followed by better ones. A more serious problem is the plot construction, based around a loser guy who grows and wins the girl of his dreams. This is a reasonably well-executed version of the story, but it’s too easy a set-up for my taste. In particular, Dave’s given too little depth. He’s not particularly talented, or hard-working, or intelligent, or even especially competent at basic things. He demonstrates some use in a zombie invasion, but those are relatively rare, and it’s not clear he’s developed transferable skills by the end of the movie. Alexander England’s performance is perfectly fine, engaging even early in the film when Dave’s main characteristic is being sullen. But the script doesn’t give him much to play with that I could see.

On the other hand, Nyong’o is almost too good for this movie, and when I say ‘almost’ I cannot discount the possibility that she is in fact too good for it but is also a consummate team player who calibrates her performance appropriately. It’s not that this is a bad film, it’s that she stands out. She gets more than anyone could expect out of the character of Miss Caroline — especially in a monologue about her past that might have been played purely for laughs, but which Nyong’o turns into an affecting confession. She’s remarkably funny in a straight-woman role, and still gets one of the best crowning moments of awesome in the movie when she enters a scene after surviving a zombie attack.

Thematically, Dave’s fear of fatherhood and need for maturity do help bind the movie together. They’re not exactly profound, but help set up what’s at stake and link the different sections. And they perhaps tie in to a broader conception of the character. Dave certainly has a need for maturity, and there’s a sly hint that he’s not too far different from the 5-year-olds who follow Miss Caroline around and look to her as their leader. Of course a man as feckless as Dave will be attracted to a woman who teaches children. Whether he grows enough over the film to build a long-term relationship with her, well, the movie ends and lets us decide for ourselves.

There remains only a few words to be written about the zombies. They’re slow, shambling things, which helps give them a comic edge — made sharper by the fact that even by zombie standards they’re not especially bright. We’ve reached a point in popular culture, that amorphous mass of understandings audiences can be assumed to have, when a film doesn’t need to explain the details of how zombies work or how they were created. A secret American military base running something called Project Regeneration? That’s good enough. The zombies here are good sports, and play along. 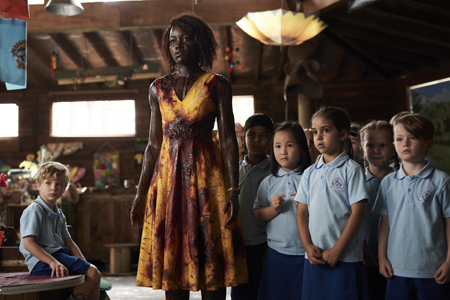 One must wonder whether it is at this point easier to write a comedy around zombies rather than a horror movie. Monsters have a kind of cycle, at first new and terrifying, then old hat, then frightening again when they get new twists on top of what’s already established (as when fast zombies were first introduced), then worn out again and surviving as parodies of themselves. Time will move on, and sooner or later some filmmaker will bring a new approach to an old monster and reinvigorate them — but meanwhile we have the rise of the zomcom, as seen in last year’s One Cut of the Dead and now in Little Monsters.

Monsters isn’t as wonderful a film as One Cut, but it succeeds at what it aims at. It’s funny, engaging, and overall well-executed. This is not a perfect film by any stretch. But what it does, it does well.

I saw the trailer for this a few days ago. Miss Caroline completely won me over with “Who remembers how to play tag? Well, those funny looking people out there are it.” She’s a brilliant hero. I hope this one shows up in the theaters.

Matthew, this is quite a thorough review of a rather light movie. But, I’d expect nothing less.

In regards to your “Asians with cameras” remark, though, considering that it takes place at an Oceanic tourist attraction, it’d be unrealistic to Not have them: Australia and New Zealand are top travel spots, and located near…Asia.

Yup, I don’t really know how to be brief!

I agree it makes sense there are tourists there. But I think in a visual medium it’s worth thinking about how images are presented. For me the specific images the film used got a bit stereotypical. Though it’s possible by that point I was maybe primed to notice it, having seen an example of that kind of imagery just recently when I saw Rosemary’s Baby. (Where it really comes out of the blue.)