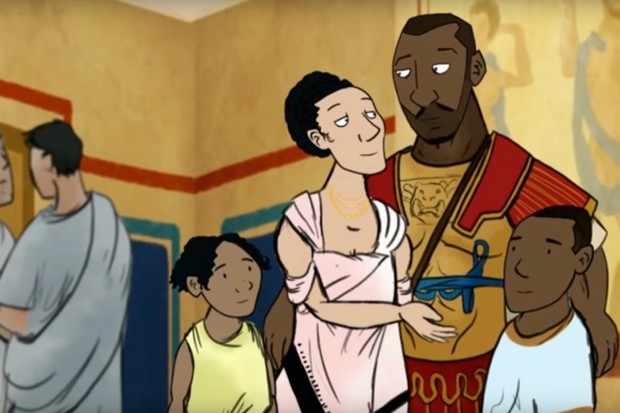 Yes, there were black people in Europe, dating as far back as the Bronze Age. Kindly get over it.

It’s pride month, so I’m going to talk about representation.

As much as speculative fiction can be an escape from the world, it is also a reflection of the world in which we live. It reflects to us our failings, fears and hopes in fantastical settings. Often times, these are set in worlds which are supposed to closely reflect our own world, or its history. But there’s a problem.

They don’t. Not really. Or rather, not often.

In fact, so pervasive is this psuedo-representation that now there is outrage when something closer to reality is portrayed in speculative fiction, be it book or film.

“There were no black people in medieval Britain!” cries the uninformed, relying entirely on modern media, having done no research on the topic whatsoever.

“Stop pushing your homosexual/trans agenda!” screams the fool, ignoring the fact that two-spirit, gay and lesbian people have existed for as long as humanity has.

“Women were not warriors, or war-leaders,” splutters the nescient, tearing out the relevant pages of history that would prove them wrong.

The fact of the matter, these positions are entirely, utterly, incomprehensibly incorrect. 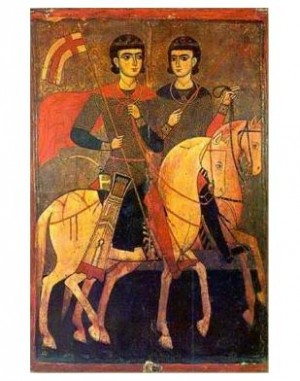 There were black people in Europe. There are burials in Britain from the Bronze Age, the interred clearly having been raised in Africa. And most certainly, thanks to Rome, there were people from all over Europe, (at least) Northern Africa, and the Near-East marching around the place. Names of people are reflective of this fact (Dougal means something like Dark Stranger, for example).  Europe was not white heaven.  It wasn’t a whites only place. The representation of it as such has always been inaccurate. Nor, it seems, were they particularly concerned about the color of a person’s skin, except to describe them. That is a sadly modern affectation.

Unfortunately, it’s the inaccurate representation of Europe and European history as white only in our media that people cling to when they cry foul at seeing a black man in a film about the Arthurian legend (for example). I’ve seen internet arguments, where someone seriously asked with derision, “Well how did they get there? Walk?”

I mean, yes. If they had some money, they might have ridden on a horse or donkey, or traveled by cart or carriage. Perhaps they sailed. The Mediterranean Sea is all that separates Europe from Africa, and it’s not huge, people. Likely, it was a combination of all of these modes of transport.

The Mediterranean Sea. Look how not-impossible that voyage must have been.

Sadly, all it would take is some amount of research, including archaeological findings, to realize how incorrect the assertions of a white-only Europe is. There have been people of color in Europe since at least the Bronze Age, if not before.

The exclusion of people of color in worlds based ostensibly in analogues of medieval Europe is not at all reflective of the actual population in our own history. Their inclusion is not part of any kind of agenda. It’s merely reflective of what the research says about the time and place.

The same can be said for people in the LGBTQA+ community. They are and were everywhere in our history and mythology, particularly in Greco-Roman traditions. Historical examples of same-sex couplings are everywhere, if one bothers to do any research. Here is a fairly decent Wikipedia article on the subject.

Problems of historical interpretation and lack of truthful representation in our media is also why people cry fowl when even a whiff of a trans or homosexual character makes an appearance. Early historical interpretations excluded homosexuality and transsexuality as even a possibility, burying gay and lesbian couples as “really good friends… like best friends… like, they shared a house and a bed, but didn’t do any weird stuff level of friends.” Puh-lease. Transsexual people aren’t even discussed in the historical record, and if they are, they’re often referred to with incorrect pronouns and their transness explained away, no matter the mental gymnastics required to do so.

Thankfully, a new, more open trend in historical studies is pushing back against this deliberate erasure of LGBTQA+ players in the historical record.

If you’re after a list of some of the trans folks in history, try this by no means comprehensive list of transmen, and here‘s one with some transwomen.

More to the point, the LGBTQA+ community exists today, and will, unless the fascists win, exist in the future. Including them in speculative fiction is not part of some nebulous, evil agenda. It’s merely a reflection of the world, our history and our present. With luck, and a lot of work, our future too. Excluding them from past, present and future narratives, speculative or not, however, seems to me to be a concerted effort to rewrite history, and erase this community altogether.

This post is getting far too long, so I’m not even going to tackle the issue of women at war and in positions of power, or otherwise having as much an effect on history as the good ol’ boys we learn exclusively about, so I’m just going to point you at the site Rejected Princesses. There are entries upon entries of exactly why this position is the wrong one to take.

Look, representation matters. A lot. There are stories abound of how seeing themselves reflected in a media that has previously made certain to exclude their like changed people’s worlds.  Inclusion of these minorities is so very important. More, though, their inclusion is reflective of our actual history, the reality of our present and, if we trend towards justice, our future. Their exclusion in our media has led to very skewed ideas about our collective history, and our collective futures.

So to anyone who cries “but historical accuracy” or any other objection to their inclusion is very, very wrong. It seems to me, objections against inclusion are pushing an agenda of erasure.

This pride month (and every month thereafter), push back.

Leave me your favorite minority characters in speculative fiction in the comments. Help us all read (or watch) more widely.

Vague memories of a scientific paper from when genetic mapping first became cheap enough for mass analysis to be the basis of a research project that discovered that one of the markers for families that had been in the Newcastle Upon Tyne area for generations traced back to Ethiopia about 2000 years ago. Basically a flow of people wandering up the Nile into Roman Egypt, signing up for the legions and eventually being demobbed in North East England after service on Hadrians Wall. Never managed to find the paper online though, I suspect an article in a magazine that didn’t get included in my last house move abstracted it.

One of my favorites is Ibn Fadln, the narrator of Michael Crichton’s Eaters of the Dead. He is an historical person, a member of the court of the Caliph of Baghdad, sent in 922 CE to visit the Volga Bulgars and who reports on his encounters with their neighbors, the Rus/Varangians (aka Vikings). So, in the novel, we get a re-telling of Beowulf by an Arab. And, it does not hurt in the movie adaptation, The 13th Warrior, that Ibn Fadln is portrayed by Antonio Banderas

I would have thought it obvious to most anyone that there certainly must have been some blacks in medieval Britain and other northern-European countries.

I think that a more relevant focus might be on how many blacks there were, and to that I think the answer would be that the numbers were likely so low as to be almost non-existent for the purposes of deciding whether to insert black characters into a medieval film or book.

Tain Hu, the rebel duchess and duelist Baru falls in love with in The Traitor Baru Cormorant. In a more conventional novel, Tain Hu would have been the protagonist.

An important trans person from history who deserves to be better known is Bryher. Please forgive me for going on at length about her, but she’s almost totally unknown in the US, and she’s just so awesome.

Born Winifred Ellerman, the richest heiress in England, to a half-Jewish father who was one of the world’s great shipping magnates, she was both extremely privileged and an outsider. I’m using she/her pronouns here because Bryher did, though she spent her childhood furious that she was not a boy, and used her privilege in part to insist on living as a man for much of her adult life. She married a bisexual man in part to cover up his affair with her life partner, the poet Hilda Doolittle (who published as H.D., and was identified in Bryher’s New York Times obituary as her “distant cousin” to explain their cohabitation). The three of them lived together in Switzerland, founding a film company and the world’s first journal devoted to discussing film as a fine art.

Most impressively, she spent the interwar years quietly helping Jewish artists and intellectuals escape from the Nazis, starting long before most people understood what Hitler was up to. Who helped Sigmund Freud get out of Vienna with all his books and worldly possessions? Who was pacing at the Swiss-German border, sucking down cigarettes, waiting with the getaway car for Walter Benjamin? That would be Bryher. One scholar (don’t remember now which one) estimated that she helped 150 families relocate. She pretty much transplanted the Viennese mental health field into London and New York and used her social standing to destigmatize what we now call PTSD, because she had known so many people who never recovered from the traumas of WWI.

When it was no longer feasible for her to rescue people one family at a time, she and H.D. and H.D.’s daughter, whom Bryher adopted, moved to London. She did war work that, at least when I was still in academia, wasn’t entirely understood yet, because people studying her were pretty sure a lot of it was classified. The shipping fleet she inherited was devoted to the war effort in ways that were deliberately vague. She got H.D.’s daughter, who was fluent in 4 languages, work with British Intelligence. With H.D., she founded the only literary magazine that never stopped publishing during the Blitz.

(If you want to keep an arts scene going through a war, start stockpiling paper, ink, and printing presses years before the war starts, and keep them locked away without telling anybody, so they don’t all get commandeered for military use.)

After the war, she was the big shipping magnate, smoking pipes and wearing men’s suits, her hair pomaded in perfectly masculine 1950s style. And she wrote several historical novels, mostly set in the ancient Mediterranean, which I haven’t read but which were favorably reviewed when they came out. Some of them are back in print now (or were fairly recently) from university presses.

She lived to be 88, rich, powerful, revered by the 150(?) families she saved and the artists and authors she had kept going during the war, and having spent decades in a stable life partnership and parented a kid. If anyone you know has benefitted from the destigmatizing of PTSD, her decades of advocacy laid the groundwork for the help they got. She may not have been demographically typical, but she was real, documentable, and culturally badass.

This is just about my favourite comment, Sarah. Thanks so much for telling me about Bryher. What an incredible person!