The July, 1954 issue of Galaxy Science Fiction (cover art by Mel Hunter) opens with a note from H. L. Gold, the editor. Several authors had shared with Gold how it felt to sell a story to Galaxy. But Gold, an author himself, writes, “Do you think anybody has to tell me how that feels?” He was looking for jobs by day and writing by night in the early 1930s when jobs were scarce, and his “manuscripts seemed to be opened by a machine that slipped them unread, along with a rejection slip, into the return envelope.”

As an author myself, I couldn’t help but laugh; how often it feels that way when submitting stories and getting a form reply (by email in more recent years). One day, after being laid off from a position as a busboy, he checked the mail and found that he had sold his first story. He writes, “Don’t kid yourself that writing is a substitute for work. It requires as hard an apprenticeship as any other profession.” And as a final encouragement, he adds, “Magazines don’t have automatic remailing or story-writing machines. I just thought you might be wondering.” 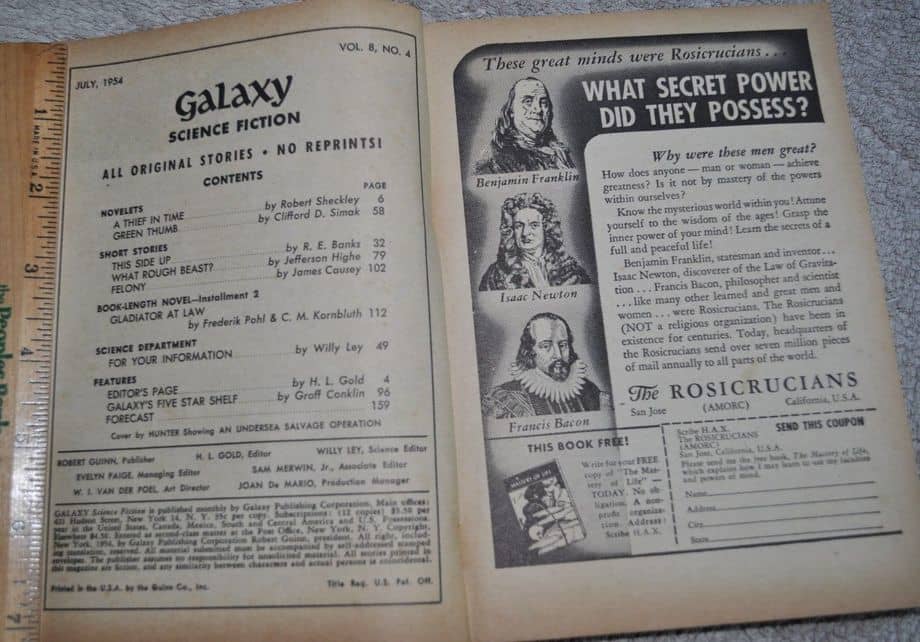 “A Thief in Time” by Robert Sheckley — Thomas Eldridge is an associate professor at a university, studying temporal elements and force application. Suddenly, a man approaches him in his room, accusing him of a theft that will occur in the future. The man uses a device to summon two policemen to arrest Thomas, but they ask for extradition papers first. In the confusion that follows, Thomas takes one of their time traveling devices and plunges forward in time. If his future self is a thief, which he highly doubts, Thomas wants to discover the reason for the theft and perhaps prevent it from happening. But now, he’s become a fugitive in time with no knowledge of anything but the past.

As usual, per Sheckley, the story is fast-paced and adventurous. I also like Sheckley’s approach to time travel, though I was a little thrown off by the final timeline. But I might be overthinking or overlooking something.

“This Side Up” by R. E. Banks — Dr. Gan is a Thurkian, studying humans on Earth. He admires the humans for their immortality — how their birth markers in fields predict the date they are to be removed from the ground and ushered into life with all of the wrinkles of youth. And over time, they grow older, gradually losing their wrinkles, then becoming children, and finally reaching immortality in utero. Though similar in appearance to humans, Thurkians are quite different in many ways, and Dr. Gan becomes increasingly perplexed the longer he studies the last human.

The author respects the intelligence of his readers in this story, expecting that we’ll follow the plot, despite having a misinformed narrator. That’s not an easy task to pull off as an author. It’s a bit lighter at points without being a completely humorous story. Raymond Banks was the author of many short stories and novels, including Lust of the Swampmen and Lust in Space (these titles were written under a pseudonym originally, likely for obvious reasons).

“Green Thumb” by Clifford D. Simak — Joe discovers a strange plant that’s nearly dead. He helps it back to life, and it begins to walk about on root limbs. He and Plant (as Joe calls it) strike up a friendship; the two communicate in a type of telepathy of images and feelings. But eventually, Plant needs to return to its own world.

I was convinced when I started reading this that Plant would start murdering people at some point, but I’m glad it wasn’t a horror story. I enjoy stories like this one with aliens that are truly alien rather than a slightly different version of human. Or aliens that look decidedly different but think and behave like humans.

“What Rough Beast?” by Jefferson Highe — John Ward struggles to teach his class because some of the children have powers well beyond his — like the power to teleport tigers from the zoo into the classroom. He talks at length with his wife about how society came to be this way and eventually reaches his own conclusion.

My struggle with this story is that it doesn’t seem to go anywhere. There’s a conflict of children who have extraordinary powers, and the ending is that the protagonist thinks he knows why they have powers. But nothing is resolved, so I don’t understand the point of the story. I couldn’t find any information on this author; this is his only publication. It smells like a pseudonym, but I have no proof, only suspicion. If it is a pseudonym, Gold would do this for authors already published in an issue or for himself. I suspect Gold wrote this story; it feels like something he’d write.

“Felony” by James Causey — Vogel is a ruthless man with methodical, careful thinking. People hate working under him, but his superiors enjoy his accuracy on project estimations. He hires a foreign man named Amenth who seems to have no practical experience with construction but is a quick learner. Over time, Vogel gives Amenth increased responsibilities. But there are oddities — how quickly Amenth learns English, his odd working hours, and a strange schematic buried under other papers at Amenth’s work station for a type of circuit Vogel has never seen.

This was an interesting choice — to use a protagonist who readers shouldn’t care for. But because I had no empathy or connection to Vogel, I was uncomfortable watching him investigate a likeable character. 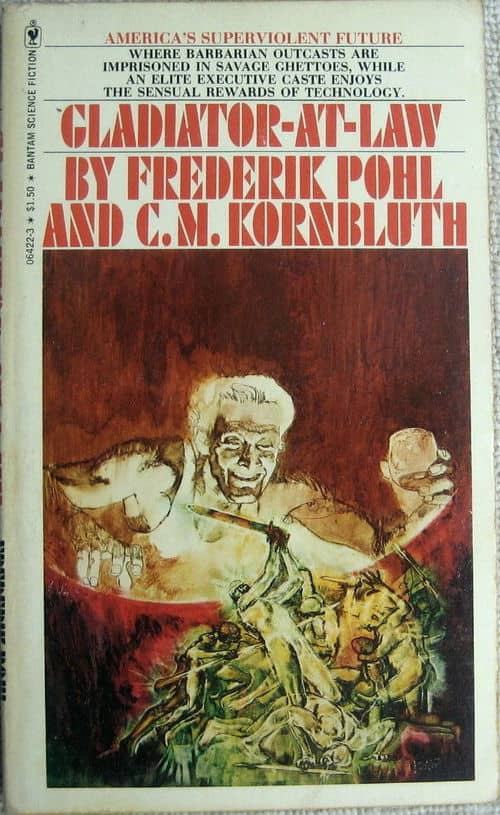 The 1977 Bantam paperback edition of
Gladiator-at-Law; cover by Kossin

Gladiator at Law by Frederik Pohl and C. M. Kornbluth (Part 2) — Norvell, his wife, and her daughter are evicted from their home after he loses his job. They’re relocated to Belly Rave — a lawless area where children form gangs for safety and survival. Norvell learns how to endure the hardship and make himself useful.

Charles Mundin can’t find Norma Lavin, who hired him to legally represent her brother, Don. Don owns a sizable percentage of stock in the G-M-L Homes company, but someone conditioned Don to the point that he’s lost a large amount of his mental capacity. Charles realizes that someone powerful likely abducted Norma; if they murder Don, the shares would go to her, and they could force her to sign the shares over to them. But Charles has his own plan to sway some of the largest shareholders to his side. There’s only one problem — he still doesn’t know where Don’s stock certificates are located.

The novel is flowing pretty well. Characters are weaving together into a solid plot. I’m eager to finish it with the next issue.

Beyond the fiction, this issue also has “For Your Information” by Willy Ley. There was excitement over the fact that Mars was in opposition in 1954, meaning alignment between the Sun, Earth, and Mars. This happens every 2 years and 50 days, but in 1954, the two planets would be closer together than they had been for years. Earth and Mars both have elliptical orbits, so there are times when their opposition may be closer together than others. (2003 was the closest opposition in about 60,000 years — a record that will stand until 2287.) Ley also answered questions received by mail (as he often does). One person wanted to know how we can see the inner planets at night, given that the Earth is turned away from the Sun. Willy points out that we can see them only before dawn because the Earth has turned toward them but not all the way toward the Sun, and in the case of Mercury, we only have about half an hour of visibility to do so.

Groff Conklin’s review, quoted on the back of the paperback edition of
The Best From Fantasy and Science Fiction, Third Series (1960, cover by Emsh)