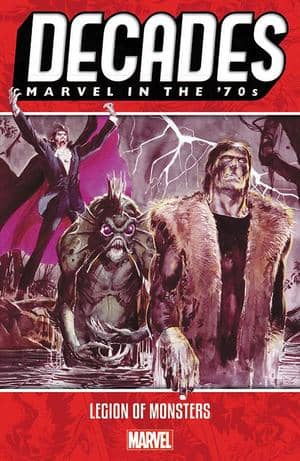 If there’s a company out there that knows how to use nostalgia to shake dollars out of me, it’s Marvel. I’ve already shelled out for their deluxe hardcover Omnibus volumes, the black & white Essentials line, and more recently I’ve spent a fortune on their Epic Collections, which assemble 18 issues apiece of early core titles like Thor, Spider-Man, Avengers and Fantastic Four. Recently they’ve launched a Decades series that looks at some of the more offbeat comics from Marvel’s long history and, heaven help me, I’m reaching for my wallet again. In this case it’s for a nearly forgotten team book from the 70s which has never let go of my imagination.

Celebrate 80 years of Marvel Comics, decade by decade — together with the groovy ghoulies of the Supernatural Seventies! It was an era of black-and-white magazines filled with macabre monsters, and unsettling new titles starring horror-themed “heroes”! Now, thrill to Marvel’s greatest horror icons: The melancholy muck-monster known as the Man-Thing — whosoever knows fear burns at his touch! Morbius, the Living Vampire! Jack Russell, cursed to be a Werewolf-by-Night! And the flame-skulled spirit of vengeance, the Ghost Rider! But what happens when they are forced together to become… the Legion of Monsters? Plus stories starring Dracula, Frankenstein’s Monster, Manphibian, the vampire-hunter Blade… and never-before-reprinted tales of terror!

Previous titles in the Decades series include Marvel in the 60s – Spider-Man Meets the Marvel Universe, collecting 60s Spider-Man stories from Amazing, Avengers, Daredevil, Fantastic Four, and other places; Marvel in the 50s – Captain America Strikes! which gathers material from Young Men, Captain America (1954), Men’s Adventures, and other mags; Marvel in the 80s – Awesome Evolutions, which collects some of the bizarre makeovers of the 80s, including Spider-Man’s black costume, Storm’s mohawk, Thor’s battle armor and the Hulk’s return to gray.

I recently read ToD #1, Marvel Spot Light #2-3 and the first 12 issues of Monster of Frankenstein.

I love Mike Ploog and Gene Colan’s art. These sampler collections are neat. I don’t feel like you’re getting enough material though.

Not the same material, but there is a Marvel Horror omnibus scheduled for late this year.

It collects the more obscure Marvel horror characters. Like the Scarecrow, The Mummy, and The Zombie.

Thanks Glenn! Yeah, I’d like to see more of these 70 monster reprints as well.

I bought several of the TOMB OF DRACULA reprints a few years ago, but I’m not aware of any other books reprinting Marvel’s b&w monster comics. Do you know of any?

I have a soft spot in my heart for Marvel monsters too. If I see this on the shelf I’ll likely grab it.