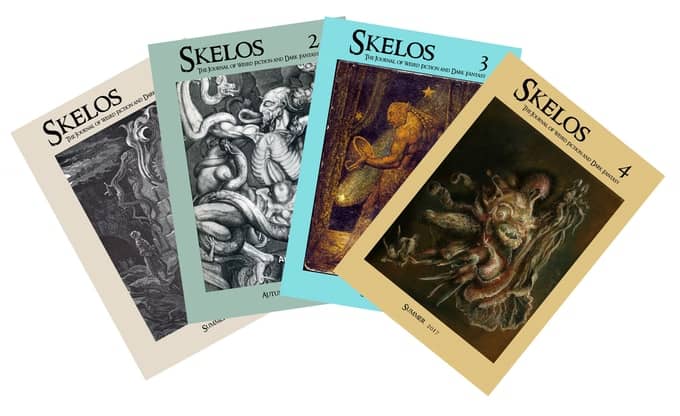 Skelos magazine, launched as a result of a terrifically successful Kickstarter in 2016, is one of the best new magazines of weird fantasy on the market. Editors Mark Finn, Chris Gruber, and Jeffrey Shanks produced three of the first four promised issues — all of which look fabulous, and were well reviewed. But the fourth, originally cover-dated Summer 2017, has yet to appear, and after a year of delays and virtually no communication from the editors, there’s been a lot of open speculation around the fate of Skelos. Late yesterday Mark Finn posted a lengthy update with good new for dark fantasy fans.

Starting in 2019, we will resume publishing Skelos at a rate of two issues per year, during the Summer and Winter seasons… We will also pursue a more leisurely publishing schedule with regards to collections and original anthologies. Right now, there are two books in our hopper; a collection of Mythos Fiction by Don Webb, and a collection of Elak of Atlantis stories by Adrian Cole. We are very excited to bring those books out in 2019. Other original volumes and collections will follow and be announced, one at a time, as we can, and still keep our scheduled commitments.

As for the rest of this year: there’s not much left, but we are keen to finish and publish Skelos #4. Also, we are keen to fix/re-organize all of the ebook files so that they are standard and uniform and most important, all available. Once Skelos #4 is out, and the four issues have been secured and locked down in a digital format, we will turn our attention to publishing Skelos #5 and Skelos #6 in 2019, and Skelos #7 and Skelos #8 in 2020. Don’s book, Building Strange Temples, will be available in 2019, along with Adrian’s Elak collection. We will announce their on-sale dates in a timely manner… There are not enough places to read the things we like to read. Skelos was formed to address that, and we’d like to see it flourish.

We thank you for your patience. We will fix this, and try to do better going forward.

Speaking as a fan of the magazine, and one who’s been following the personal difficulties of Mark and his team with considerable sympathy, I’m relieved and impressed at the dedication of the entire team, and very much looking forward to the new issues. Read Mark’s complete Open Letter on Facebook here.

Fingers crossed for them and this is a reminder that I really should read the issues I have on my Kindle.

He should let his supporters who funded it through Kickstarter know, on the Kickstarter page. I don’t facebook, and I imagine many others who helped start the magazine are in the dark. While this is really good news, ignoring those on Kickstarter (inquiring about not just the future of the magazine, but missing copies as well) has been par for the course.

Ah! A brother-in-arms is climbing back on the publishing horse. Huzzah!

> While this is really good news, ignoring those on Kickstarter… has been par for the course.

Yeah, I know what you mean. When I heard about Mark’s Open Letter, the Kickstarter page was the first place I checked. But there hasn’t been an update there since November 2017. I hope there will be soon.

> Ah! A brother-in-arms is climbing back on the publishing horse. Huzzah!

That’s exactly how I felt. Our community is too small to lose another Band of Brothers!

John, we are in violent agreement! So far the HFQ Crew has managed to weather all the storms that have come our way, but our storms have been but mild spring zephyrs compared to the typhoon of suckage experienced by Skelos.

Also wish them the best and hope their new schedule is attainable. Agree the info on kickstarter has been a bit thin, so it was nice to get the big picture on facebook.

What this does underline is just how precarious an undertaking it is to run a publication that isn’t one’s day job. Take my hat off to those that try, doubly so to those who succeed.