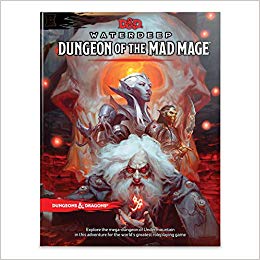 Dungeons & Dragons is having something of a renaissance. After a somewhat awkward period era known as “fourth edition,” the most popular roleplaying game in the world has attained a greater reach than anytime in its history.

If you’re looking for some good setting materials or adventures for Dungeons & Dragons 5th edition, this last year has shown the release of a handful of fantastic resources. Last spring was Mordenkainen’s Tome of Foes, a great resources of various races, including the Devil/Demon war between Hell and the Abyss. But two books released this fall focused a little closer to our fantasy home, with the classic city of Waterdeep.

Waterdeep: Dragon Heist is an urban-based adventure for characters of level 1-5, centered around a massive treasure embezzled from the government of Waterdeep and rumored to be hidden within the city. The GM picks the main villain at the outset from four options, a choice that determines the season of the adventure, which alters how the subsequent chapters will unfold.

In addition to the adventure itself, Dragon Heist contains a chapter detailing the specifics of Waterdeep. This is really the first of the 5th edition supplements that has focused heavily on an urban adventure, providing some good information for anyone who wants to set their adventure within the streets and society of Waterdeep.

Waterdeep: Dungeon of the Mad Mage picks up where the previous adventure drops off, taking characters level 5 through 20 from the streets of Waterdeep into the deepest catacombs and dungeons of the Undermountain lair beneath. The Undermountain city of Skullport is detailed, as well as 23 dungeon levels that players can search after for Halaster Blackcloak, the Mage Mage. Whether used as a massive dungeon crawl or individual levels used as side quests for adventurers who want to foray into the Undermountain on brief excursions, Dungeon of the Mad Mage provides a wealth of encounters. Not to get too spoiler-ish, but there is a certain treasure to be found within these Undermountains levels which, together with Mordenkainen’s Tome of Foes, makes me think that maybe a Spelljammer-related supplement might be in the works for sometime in the future. 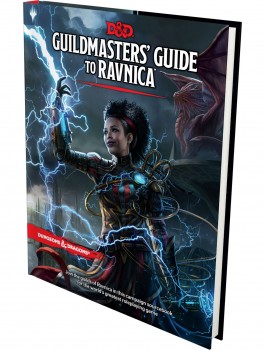 Wizards of the Coast, the company that produces Dungeons & Dragons, is also the owner of Magic: the Gathering. So it’s little surprise that they have finally combined those two most popular properties, by releasing a full D&D setting book that explores one of the major MTG settings, the massive city of Ravnica. The Guildmasters’ Guide to Ravnica gives the information needed to play a Dungeons & Dragon campaign in Ravnica, including rules for playing adventures and campaigns centered around the guilds of Ravnica. The character creation options include a diverse array of new player classes, including iconic goblins, centaurs, minotaurs, and the loxodon elephant people. (Sadly for this old blue deck player, no merfolk.)

And if you somehow haven’t yet gotten around to playing 5th edition, or know someone who hasn’t, then you could consider this Core Rulebook Gift Set.

Though Dungeons & Dragons is primarily a roleplaying game, over the years it has become a valuable intellectual property in its own right, a franchise that has expanded well beyond the original game. There are a variety of accessories, including an official Dungeons & Dragons ugly sweater.

The novels related to the game have always helped to build a connection with the world. I still consider the Dragonlance: Legends trilogy one of the greatest fantasy storylines. These days, the books related to D&D take many forms:

If you’re looking to play games, but maybe for something with more boundaries than a full roleplaying game campaign, there is no shortage of other games in the Dungeons & Dragons franchise:

Also worth checking out: The big box games (Ravenloft, Wrath of Ashardalon, etc.), which I’d argue are the only good things to come out of 4th Edition.