The newest supplement for Dungeons & Dragons 5th edition, Mordenkainen’s Tome of Foes (Amazon), continues to provide the high quality of content we’ve come to expect from this series, focusing on quality and story depth over serious escalation of power.

Tome of Foes expands on setting and background information for the main setting, with the bulk of the book being the 137-page Bestiary chapter, containing monsters from across the dimensions, including a variety of duergars and drow templates to a host of Demon Lords and Archdevils. And that’s all just in the D section of the Bestiary, not even account for the constructs, elder elementals, and ample quantities of undead!

While the monsters are great to have, the first half of the book has a lot to offer for the Dungeon Master in terms of depth, as well.

The first chapter gives a wealth of detail on the eternal Blood War between the armies of demons and devils for who gets claim on being more evil. It’s easy to treat demons and devils as villains just there to be killed, but after reading this chapter, you’ll be more inclined to treat them as unique creatures, with their own goals and motivations. I’m looking forward to using this information to build a storyline where my players are stuck between the goals of demonic cults and devil cults, who hate each other nearly as much as they hate the party of adventurers.

Subsequent chapters provide details on the cultures of elves, dwarves, halflings, and gnomes. Information on the Feywild and the Underdark is also provided where appropriate, for those who want to incorporate them more into their campaigns. In addition, a chapter focuses on the endless war between the two gith races, the githyanki and githzerai, who escaped their enslavement from the mind flayers (who are themselves not covered in detail Tome of Foes, but are well covered in the previous Volo’s Guide to Monsters) only to find themselves in a brutal clash against each other.

Players, too, will find the background information on their races helpful. From a mechanics standpoint, there are a few useful player options. The basic tiefling model in the Player’s Handbook is based on the devil Asmodeus, but there exist subrace rules for creating slightly-modified tieflings who are descended from other types of devils. Feywild elves – the season-linked eladrin – are also given as subrace options, along with sea elves and the shadar-kai elves from the dark Shadowfell realm. Character information for githyanki and githzerai races as player characters is included, as are subrace information for the duergar “dark dwarves” and the svirfneblin “deep gnomes.” Halflings get a bit shortchanged in this, as their section includes only some tables of Personality Traits, Ideals, Bonds, Flaws, etc. But for players who are looking for background information on the cultures that their characters would come from, there is ample useful information provided in these chapters to help them give them some guidance, as well as the new options and abilities.

I’m a member of some Facebook groups related to Dungeons & Dragons. Probably the three biggest topics are periodic debates about the merits of the alignment system, discussions of problem players/Dungeon Masters, and whether or not it’s okay to modify the rules as written. (Incidentally: Yes, it is okay.) It’s possible that the fourth most common subject is asking when people think there will be a 6th edition.

The relatively slow trickle of official supplements and adventures, only 3 or 4 a year, means that sales of the books stay pretty high, and the company is not burning players out with too much material. Mordenkainen’s Tome of Foes began selling only a couple of weeks ago, but is selling so well that it’s causing confusion in non-fiction bestseller lists. The extra-dimensional emphasis of the Tome of Foes, and its success, strongly suggests that there’s plenty more for Dungeons & Dragons to do in exploring their expanded multiverse, and that players are willing to buy it. So long as this model remains profitable, there’s no reason for them to annoy their fans and players by shifting to a 6th edition.

So, if not a new edition, then what is coming in the future for Dungeons & Dragons?

The next supplement on the horizon is September’s Waterdeep: Dragon Heist. (already available for pre-order, along with a related dice set, including a hit point tracker) In addition to an adventure for levels 1-5, this is the first 5th edition urban adventure and will provide expanded information on the renowned city of Waterdeep. This will be followed up by a revisit of an old-school classic with November’s Waterdeep: Dungeon of the Mad Mage (also available for pre-order), picking up the storyline and taking adventurers from levels 5 to 20 in an exploration through 23 levels of the Undermountain, including the city of Skullport. 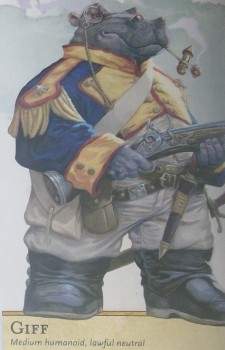 According to a report from Comicbook.com, Dungeons & Dragons has announced that they will be introducing new settings toward the end of the year. These will apparently be introduced within single books, sort of like how the dimension/nation of Barovia is described in the Curse of Strahd book. The presence of the giff species (anthropomorphic hippo space mercenaries, as shown in the graphic) in the Tome of Foes provides a possible clue, as they were a species from the space fantasy Spelljammer setting, and a control helm for a spelljammer ship has been teased as one of the possessions of the main villain in Dungeon of the Mad Mage. Alternately, some playtesting of psionic abilities and mentions from developer podcasts have suggested that psionic character options might be coming, which would fit in well with a Dark Sun campaign setting. (Dungeons & Dragons released a Dark Sun supplement in 4th edition, as well.) Of course, if looking to do something more limited like Barovia, it is possible that the extra-dimensional city of Sigil from the Planescape campaign setting might be more in line with that.

No one outside of Wizards of the Coast knows for sure what settings they will be exploring, but Tome of Foes has made clear that the emphasis on the Forgotten Realms is not exclusive, and that other portions of the multiverse are certainly going to be explored in Dungeons & Dragons 5th edition. It’ll be exciting to see what they offer.

Mordenkainen’s Tome of Foes is available through your local game story, also through online sellers like Amazon, and in digital form through services like D&D Beyond, Fantasy Grounds, Steam, and Roll20.

Disclaimer: A copy of Mordenkainen’s Tome of Foes was provided by the publisher for review purposes.