When I learned last September that Baen Books was reprinting Poul Anderson’s classic Psychotechnic League stories, I wrote a brief history of the series. Here’s what I said, in part.

The Psychotechnic League began as a Future History, a popular beast among short SF writers of the 40s and 50s. Anderson published the first story, “Entity,” in the June 1949 issue of Astounding Science Fiction, and set the opening of his series a decade in the future. The series continued for the next two decades, (appearing in Astounding, Planet Stories, Worlds Beyond, Science Fiction Quarterly, Cosmos, Fantastic Universe, and other fine magazines), eventually extending into the 60s. In the process, his “Future History” gradually became an “Alternate History,” as actual history trampled all over his carefully constructed fictional timeline.

That didn’t seem to bother readers though, and the tales of the Psychotechnic League remained popular well into the 80s. The series included some 21 stories, including three short novels: The Snows of Ganymede (1955), Star Ways (1956), and Virgin Planet (1957). The short stories and one of the novels were collected in a trilogy of handsome Tor paperbacks in 1981/82, with covers by Vincent DiFate. Now Baen books is reprinting the entire sequence in a series of deluxe trade paperbacks, starting with The Complete Psychotechnic League, Volume 1, on sale next month.

Volume 1 was released right on schedule last October, and Volume 2 followed in February. The third and final book will be released next month.

Here’s the 1981/82 mass market Tor editions I mentioned above, with their marvelous DiFate covers.

(Don’t be confused by the JIM BAEN PRESENTS logo at the top; these are definitely Tor editions. Bean left Ace in 1980 to join his friend Tom Doherty at Tor, where he started the SF line. Three years later he struck out on his own and founded Baen Books.)

As handsome as they were, the Tor editions were constrained by size, and didn’t contain all the stories. In particular they were missing much of the longer work, such as the novels Star Ways and The Snows of Ganymede. But they did contain essays and interstitial material by Sandra Miesel which I found very helpful in stitching the narrative together.

The Baen editions are called The Complete Psychotechnic League for a reason. Each volume contains stories that were overlooked in the Tor books, including The Snows of Ganymede in Volume Two. They also reprint Sandra Miesel’s essays and connecting pieces. 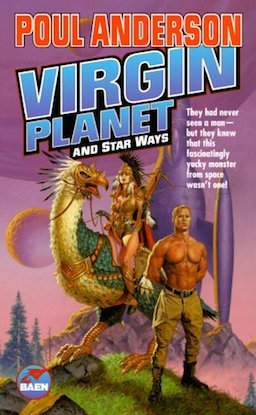 The other two Psychotechnic League novels, Virgin Planet and Star Ways, were published in a mass market omnibus edition from Baen in 2000 (right, cover by Clyde Caldwell). It’s now out of print, but copies aren’t too hard to find online. Virgin Planet is also included in Volume 3 of The Complete Psychotechnic League (see below). You’ll note the similarity between the cover of that book and the one at right.

The Complete Psychotechnic League, Volume 1 contains three novellas and one short story, “Marius.” Plus an introduction by Sandra Miesel. The cover is by Kurt Miller. Here’s the complete TOC.

The Complete Psychotechnic League, Volume 2, contains one novella, “The Troublemakers,” and the complete short novel The Snows of Ganymede, plus a forward and interstitial material by Sandra Miesel. The cover is by Kurt Miller. Here’s the complete table of contents.

Finally, The Complete Psychotechnic League, Volume 3, contains a handful of previously uncollected tales, including “Entity,” “Symmetry”, and “The Green Thumb,” plus the complete novel Virgin Planet. The cover artist is uncredited.

If you’re a fan of classic SF or the works of Poul Anderson (and the two are frequently synonymous), all three volumes are a must-have.

The Psychotechnic League stories have long been a sneaky favorite of mine among Anderson’s work.

Anderson was a serious Sherlock Holmes and Solar Pons fan.

I’ll echo what George and Rich said. I can’t get enough Poul Anderson, and these are great. I have the first 2, and am eagerly awaiting the third.

No kidding! I know Anderson probably didn’t deliberately name them so similarly, but holy cow. The two series have confused me for decades. I’m glad Baen has these collections so now I don’t have to keep them straight.

> The Psychotechnic League stories have long been a sneaky favorite of mine among Anderson’s work.

If I’d had a bit more time as I was putting this post together yesterday, I would have included links to your reviews. Have you ever reviewed SNOWS OF GANYMEDE or VIRGIN PLANET?

I thought I had reviewed both, yes, but possibly not in a still available forum. (On SFF.net, in other words.) I’ll try to find them tonight, and maybe post the reviews on my blog — or I could send them to you!

I did find something I wrote about the (rather tenuous) links between VIRGIN PLANET, STAR WAYS, and the rest of the series.

By the way, is John Gergen still credited as co-author on “Entity”? He was credited in the original issue of Astounding. Nobody seems to know much about him. (Kind of like F. N. Waldrop, who collaborated on Anderson’s first published story; and like Kenneth Gray, who collaborated on the somewhat obscure story “Survival Technique. Gray did publish one other piece in Astounding, and Gergen had letters in Astounding and in Planet Stories.)

I resurrected my Ace Double Reviews of STAR WAYS and THE SNOWS OF GANYMEDE and posted them at my blog.

THE SNOWS OF GANYMEDE

The discussion of STAR WAYS includes some stuff I added from a long ago Usenet post about the various Psychotechnic League stories and why they are considered linked.

Thanks, John, for the heads-up on these, and thanks to you, Rich, for the reviews of the two Psychotechnic stories.

I remember reading SNOWS in a Startling Stories binge (courtesy of archive dot org) a year or two ago. It would be great if I had something useful to say about it… but I don’t.

Somewhere (maybe in the forewords of the Tor Psychotechnic collections), Anderson recalls fondly or ruefully how the earlier stories were written when he was a “flaming liberal”. By the 60s, when he was doing some of his best work, he identified as a conservative.

But what struck me in reading the stories was that, despite his perfectly genuine change of conviction, in some important ways he hadn’t changed at all. In both the Polesotechnic League and the Psychotechnic League, the enemy is the State, and the savior is some sort of trans-state thing–businesses operating beyond where any state-writ runs, in the later stories; some sort of international technocratic fraternity, in the case of the Psychotechnic league.

We change over the years–but maybe not as much as we may think.

That’s my Deep Thought™ of the day.

Fixed the stupid link to the SNOWS OF GANYMEDE review!