I’m a fan of all kinds of fantasy. Urban, romance, Arthurian, YA, weird, magic realism, anthropomorphic, horror, sword & planet… plus all the ones I can’t think of right now. But my first love was adventure fantasy and sword & sorcery, and that’s still the sub-genre that gets the bulk of my attention. Tell me a tale of heroes and magic, and you’ve got my interest. Throw in a dungeon, and I’ll show up for opening night.

So when I found Jen Williams’ 2016 fantasy The Copper Promise — a tale of swords, monsters, and dungeons — at Barnes & Noble last weekend, I wasn’t so much intrigued as I was thinking, “How the heck did I miss this for two years??” Turns out I didn’t miss it entirely; Adrian Tchaikovsky recommended it in his Tor.com list of Five Books Featuring Adventuring Parties, which I read back in 2016, saying:

Jen is one of the best new voices in UK fantasy, and it’s a testament to her writing skill that Wydrin, the “Copper Cat” and a proper fantasy rogue through and through, does not actually eclipse her companions Frith and Sebastian as they fight, trick and run their way through a world that has gone from run-of-the-mill dangerous to actively-being-set-on-fire-by-a-dragon dangerous thanks, chiefly, to their own poor life choices. “Let sleeping gods lie,” goes the tagline. No need to tell you how that one works out.

The book was released by Angry Robot; a little digging online found one sequel from the same publisher, The Iron Ghost (2017), and a third volume published only in the UK, The Silver Tide (2016). All three were nominated for the British Fantasy Award. The first for Best Newcomer, and the second and third for Best Fantasy Novel. The reviews have been strong as well, especially for the first one. Starburst Magazine said “The Copper Promise is near-perfect fantasy-adventure fun and a breath of fresh air,” and Den Patrick said, “There are pirates and magic, demons and disciples, undead soldiers and noble knights… a lot of fun.” Here’s the Angry Robot book blurbs for the first two.

First, here’s the text for The Copper Promise.

There are some tall stories about the caverns beneath the Citadel — about magic and mages and monsters and gods. Wydrin of Crosshaven has heard them all, but she’s spent long enough trawling caverns and taverns with her companion Sir Sebastian to learn that there’s no money to be made in chasing rumors.

But then a crippled nobleman with a dead man’s name offers them a job: exploring the Citadel’s darkest depths. It sounds like just another quest with gold and adventure… if they’re lucky, they might even have a tale of their own to tell once it’s over.

These reckless adventurers will soon learn that sometimes there is truth in rumor. Sometimes a story can save your life.

And here’s the back cover blurb for The Iron Ghost.

Beware the dawning of a new mage…

Wydrin of Crosshaven, Sir Sebastian and Lord Aaron Frith are experienced in the perils of stirring up the old gods. They are also familiar with defeating them, and the heroes of Baneswatch are now enjoying the perks of suddenly being very much in demand for their services.

When a job comes up in the distant city of Skaldshollow, it looks like easy coin – retrieve a stolen item, admire the views, get paid. But in a place twisted and haunted by ancient magic, with the most infamous mage of them all, Joah Demonsworn, making a reappearance, our heroes soon find themselves threatened by enemies on all sides, old and new. And in the frozen mountains, the stones are walking…

The first two were published in the US by Angry Robot with covers by Gene Mollica. The UK editions were released by Headline with covers by Patrick Insole and Shutterstock.

See all of our recent coverage of the best new Fantasy Series here.

Until I scrolled down to see the author name, the covers had made thinking of Simon R Green’s Hawk & Fisher books.

I hadn’t made that connection myself, but you’re absolutely right. Especially the early Ace editions, with the Royo covers: 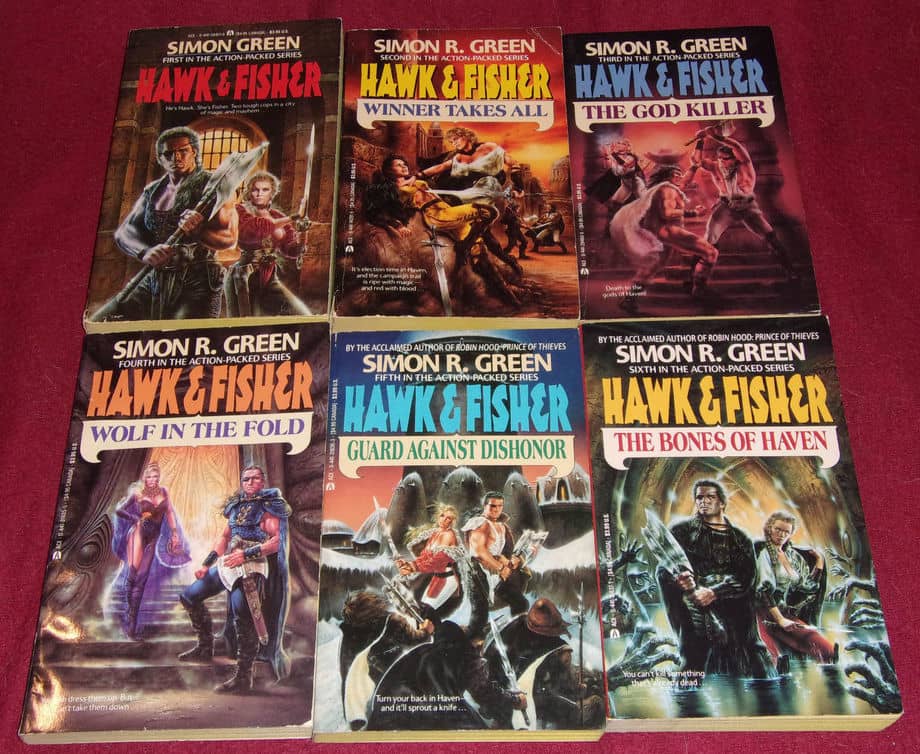 (Click for bigger version. The back covers are here.

All six Ace paperbacks are for sale in a single lot on eBay for $22.50, which is tempting, except I’m pretty sure I have most of them.