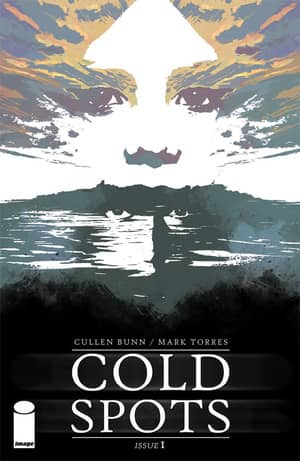 When I wasn’t sneaking in front of the TV in the wee hours to watch B&W horror classics on the local public station, I was hiding Tales from the Crypt between my mattresses. Much to my parents’ dismay, I was never much into Barbie or the myriad fan-girl magazines of the time, but spent my allowance doing my best to scare the snot out of myself.

Horror comics were easy-to-manage contraband and I became a fan for life, which is why it was particularly exciting when my friends over at Image Comics sent an early notice about their new offering launching later this summer.

Ten years ago, Dan Kerr turned his back on his wife and unborn daughter. Now, both mother and child have gone missing, and Dan must face cosmic terrors to find them again. He soon finds that ghosts stir when his estranged daughter is near. And as the dead grow restless, the cold deepens in… Cold Spots.

“The idea of a sudden drop in temperature accompanying the manifestation of spirits has always fascinated me,” said Bunn. “With Cold Spots, I couple that idea with a tale of very personal loss and dread. As the dead surround Dan and his missing child, the cold takes on a deadly, terrifying ‘life’ of its own.”

Are you a horror comic fan? What’s your favorite? Post a comment or drop a line to sue@blackgate.com.