Neal Barrett, Jr. received a Hugo and Nebula Award nomination for his 1988 story “Ginny Sweethips’ Flying Circus,” and in 2010 he was named Author Emeritus by the Science Fiction and Fantasy Writers of America. A discussion of his four Aldair novels — which Fletcher Vredenburgh called “a blast of strangeness and adventure” — broke out in the comments section of my 2013 post about Mark Frost’s The List of 7. And in his 2014 review of The Prophecy Machine, Fletcher wrote:

The late Neal Barrett Jr. wrote around thirty novels and seventy short stories. I’ve only read a little bit from his works, which include sci-fi and fantasy as well as crime fiction and magic realism. He seems to have slipped under the radar of most genre readers. On the other hand, everything I’ve read about the man marks him as one of those special authors held in high esteem by other writers.

As usual, Fletcher is bang on in his assessment. I haven’t read any of Barrett’s crime fiction either, and I’ve always been very curious about it.

But that’s why we have Rich Horton. Over at his website Strange at Ecbatan Rich reviews two of Barrett’s mid-90s mystery novels, Pink Vodka Blues (1992) and Skinny Annie Blues (1996), calling them ‘funny’ and ‘wild.’ That qualifies them for a closer look in my book. 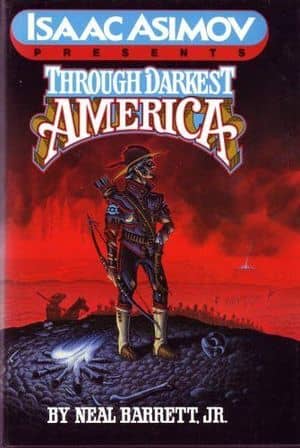 Pink Vodka Blues was the first of Barrnett’s mystery novels. It was published in hardcover by St. Martin’s Press in 1992. Here’s Rich.

His early work was decent but not particularly special, but in the 80s and through the 90s he published some excellent novels (most notably Through Darkest America) and stories (my favorite being “Stairs”). Later he turned to mysteries of a somewhat gonzo tone, as with these books. He was SFWA Author Emeritus in 2010.

In the ’90s he published a number of mysteries. Most of them have titles ending in “Blues.” Some of are part of a series about a guy named Wiley Moss…. Pink Vodka Blues is not a Wiley Moss mystery, nor indeed, it would seem from internal evidence, part of any ongoing series at all. The lead character is Russell Murray, a seriously alcoholic writer for a literary magazine in Chicago. He returns from a trip to Dallas for his editor with absolute no memory of where he’s been or what he’s done. Worse, he wakes up in a hotel room with a naked woman he doesn’t recognize — and minutes later a couple of hitmen smash their way into the room and kill the woman — the terrified Russell escapes by sheer luck. Naturally enough, he is soon the prime suspect in the murder of the woman, and he is quickly on the run. He still has no idea what happened in Dallas — he was supposedly delivering a manuscript to a reclusive author while his editor, who was supposed to do the job, spent the weekend with his mistress. Soon Russell learns that his editor is the nephew of a local mob boss, and that two factions in the mob want whatever Russell was supposed to deliver, which delivery apparently never happened. Russell can’t help, because his memory is shot. He ends up in a rehab facility after passing out in his car — and there he meets a beautiful and rich alcoholic woman. When the mob track him down, he and the woman escape, and rather clumsily and drunkenly wind their way across the US, to Dallas, Florida, and back to Chicago, chased by two strange sets of hit people, trying to figure out what Russell has forgotten.

The book is quite funny at times, though it’s also a scary (and accurate-seeming) portrayal of alcoholism. The main characters are nice enough that we root for them, but they are by no means hero and heroine — they are losers, and if they end up halfway solving their problem, only some of the bad guys get their due, and the good guys only partly get a happy ending also. Which qualifies as fairly realistic, I guess. This fits more or less into the Elmore Leonard end of the crime fiction genre, though I’d call it not as good as Leonard, but worth reading.

I also found the first of his Wiley Moss mysteries, Skinny Annie Blues, from 1996. Wiley Moss is an artist (he draws bugs) in Washington, D. C., living with a beautiful but dotty woman named Giselle. He gets a phone call telling him that his Dad, who left his mother when he was a child, has died down in Galveston, and that he better not come down there. Naturally, he figures something nasty is up, and heads to Texas. Once there, he gets in all kinds of strange trouble, involving at least three more beautiful women: his Dad’s new wife, a blind black woman named Grace; a restaurant owner named Annie (not Skinny Annie, though!); and a redhaired woman who takes immediate dislike to him on the plane. Wiley blunders around Galveston, running afoul of the corrupt sheriff R. J., the mobster Pound, the various women, and low rent criminal Harry Sykes. Everybody seems to assume he knows something about the deal his Dad had going before he died. It’s all a bit chaotic, and it depends on people acting fairly stupidly. There’s a lot of funny stuff, and some wild stuff, but it doesn’t really cohere. Minor.

I think Barrett is one of those writers who gets lumped into the category of “published a bunch of stuff in DAW paperbacks with zippy covers, so he/she can’t really be any good.”

It’s an unfair judgment in so many cases. I worked my way through Barrett’s Aldair books a few years ago, and they’re terrific.

I always see the DAW yellow spine as a mark of distinction. I’ve been meaning to read these. The Akdair books aare great fun as are the two Finn books. Through Darkest America is a post-apocalypse book that’s arguably darker and more filled with despair than The Road.