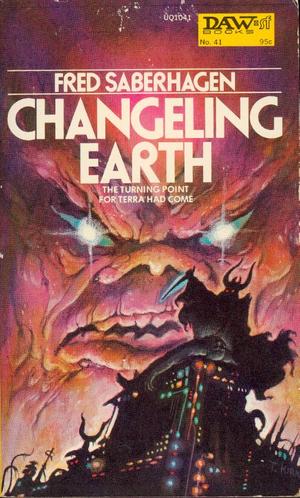 And so we come to the end of the Empire of the East, Fred Saberhagen’s sword & science trilogy. Originally titled Changeling Earth (1973), Ardneh’s World (1988), provides the answers to mysteries raised in the previous two books, The Broken Lands and The Black Mountains, as well as an explosive conclusion. When it’s done, great powers have been broken and the world has been changed again.

The last book ended with the destruction of one of the Empire’s great commanders, Som the Dead, and of one of the great demons at its command, Zapranoth. The armies of the Free Folk of the West, now under the command of Prince Duncan of Islandia, are marching on the Empire. In the East, the utterly bad Emperor John Omninor is himself leading his legions onto the field of battle for a final confrontation.

Moving behind and through the characters is the mysterious and powerful Ardneh. No one knows who or what Ardneh is. He speaks to the commanders and wizards of the West telepathically. To the emperor and his minions, he remains an elusive enemy who must be dealt with by any means necessary if the West is to be defeated, its army crushed, and its people enslaved.

Following an unsuccessful attempt to trick Ardneh into revealing himself, Omninor dispatches a force under his his High Constable, Abner, to find his enemy. Magical divination and electronic tracking has told the emperor that Ardneh resides in a mountain far to the north of civilization.

Simultaneously, farm boy hero Rolf and ex-imperial Chup have been tasked with tracking down a mystic stone and bringing it to Ardneh. Because Rolf has a strange, innate affinity for technology, Ardneh has chosen him as his special connection with the West.

At length and not unexpectedly, the two parties meet, an old villain reappears, and violence ensues. Eventually, Rolf and a new companion, Catherine, are split from Chup and the rest of the company.

So much of Ardneh’s World is exposition, but, oh, what exposition it is. When Rolf and Catherine finally meet Ardneh, his pre-catastrophe origins and how magic came into existence are unveiled. Saberhagen’s big idea is pure pulp insanity. Part of what makes Empire of the East original is its ostensibly realistic take on magic, but there’s absolutely none of that here. In order to prevent Earth’s destruction in the face of a nuclear war, untested new technological safeguards were put in place in America. When the war finally came, those precautions proved invaluable. In the wake of the mostly-averted war, the deepest nature of reality was changed. Ardneh, an intelligent, self-aware being is a result of the change. 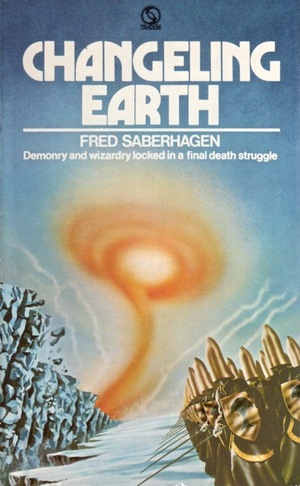 On the other side, that of the vile Empire, there is a deep secret too, though it wasn’t even hinted at in the first two books. The nativity of all demons is exposed in the tale of the greatest and most wicked of their number. When the missiles flew, most of them were rendered inert and never exploded. One, one of the most powerful, wasn’t stopped — until it it exploded. That explosion, hit by the wave changing the world, contained the atomic blast and turned it into something new, something that in time became sentient and evil. Later it took a name for itself from a demon past — Orcus.

That writhing into a furious life, begun amid a violence beyond the capability of any human being to understand, was the earliest memory of the being who would later be named Orcus, later called Lord of Lords and Emperor of all the East. His earliest memory was recorded thousands of years before John Ominor was born, thousands of years before humanity lay divided into the two camps called East and West.

For a few thousand years after his violent birth, the being who would later be known as Orcus wandered in the desert places of the earth, avoiding humans, avoiding distraction as much as possible while he groped his way toward full sentience. Child of the awesome old technology and the marvelous new magic that had begun with the Change, his substance was only partially subject to the laws of matter.

There were others more or less like him now in the world, though none so terrible of birth or power.

Orcus was so evil and so powerful that its minions, chief among them the Emperor John Omninor, locked him away behind walls of spells and beyond the confines of the real world. When Omninor comes to understand just how vast are the powers of Ardneh, he agrees with his chief wizard that the only thing to be done is release Orcus. At that point the stage is set for the final showdown between the two greatest magical forces on Earth.

As with The Broken Lands and The Black Mountains, you don’t read Ardneh’s World for the characters. Rolf is stolid and determined, Charmian is a stock femme fatale, and Omninor is icily evil. They’re barely archetypes, but they’re really only props for the story Saberhagen was intent on telling. He had a big idea — rationalized magic — and that’s what he wanted to play with. And play he does, giving us sentient machines, demonic atomics, elementals, and monsters summoned from beyond. It’s a great idea and they way he handles it, making how it works and how it’s used the real focus of the books, is interesting. He makes his characters just realistic enough, giving them motivations and dialogue that are psychologically believable, to make the books more than just some cool ideas strung together. Sometimes, it’s good to remember that not every story needs characters painted from layered-upon-layered levels of supposed complexity. Instead, they need to be able to reasonably hold a sword and fight when the monsters come.

Like its immediate predecessor, The Black Mountains, Ardneh’s World is crammed to the rafters with battles, duels, explosions, and demons. There are no dull or stagnant stretches. Even the two most backstory-filled chapters are exciting. Saberhagen keeps the pace racing as he fills the reader in on the whys and wherefores of the great mysteries of the trilogy. There’s real tension during Rolf and Catherine’s trek across the plains in search of Ardneh, and over Chup’s fate at the hands of his villainous wife, Charmian. Action movies exist to be exciting. The same is true for books like Ardneh’s World, and it, and the entire Empire of the East trilogy, is exciting:

The first wolf had gone down with Catherine’s arrow through its body, but not before Rolf’s left forearm had been severely bitten. The two of them were fleeing now, feet pounding in the darkened corridors, behind them the howls of a pursuing pack. The humans cried for help as they ran; Ardneh closed doors against their pursuers were possible, but evidently could do no more. And the doors that could be closed were too few to effectively cut off the chase, though they afforded a temporarily life-saving delay.

“To the tunnel,” Rolf gasped. It was the narrowest place that he could think of. “We maybe able to hold them there.”

On the narrow stone ledge beside the stream, with his back to daylight, he was ready with his sword for the first red-eyed howler’s spring, and caught it on his point. Others came splashing in the stream beside him. Catherine hit one with a shaft, but before she could draw again a furry body had knocked her down.

Rolf threw himself into the water, his blade dividing fur and bone. Catherine fought with a knife drawn from her belt. Standing together in the bloodied water it seemed for a moment that they might hold…

I’m not sure the first time I became aware of this trilogy’s existence. I think it was my friends, the Brothers K, who first told me about reading it, and we met in 1980. I might have picked up a copy way back then, but I won’t swear to it. Whatever, I didn’t read it. So, for nearly forty years, I missed out on a great, fun read. It wouldn’t have changed my world in the slightest, but nonetheless, I’m a little miffed I skipped out on it all those years ago.

Now, I’ve rectified that and am really curious where Saberhagen went next with this setting. One of the first things I wrote about these books was that they led straight to a lengthy series. There are eleven books — the Book of Swords trilogy and the eight-long Book of Lost Swords series. I’m definitely going to give the first set a try and see where that takes me. You can be sure when I do, you’ll read about it here.

All that, plus it’s short. In my TOR omnibus paperback, the whole trilogy doesn’t come to half the length of one volume of George R.R. Martin’s increasingly-unlikely-to-ever-be-finished saga.

I like doorstoppers as much as anyone else, but there’s a lot to be said for someone who can quickly and efficiently sketch out a world, fill it with color and characters and incident, and then wrap it up so he – and you – can move on to something else. It’s an increasingly lost art, and one that I’m appreciating more and more as I grow older.

I like doorstoppers as much as anyone else, but there’s a lot to be said for someone who can quickly and efficiently sketch out a world, fill it with color and characters and incident, and then wrap it up so he – and you – can move on to something else. It’s an increasingly lost art, and one that I’m appreciating more and more as I grow older.

Somewhere along the line, “epic” became confused with length. An epic can be told without a long series of long novels. EMPIRE OF THE EAST and Moorcock’s Elric saga/epic come to mind, as just a couple of examples.

@Thomas – Yep, it’s short and sweet and big in scope.

@Paul – From you lips to fans’ and publishers’ ears. There are few doorstoppers warranting their length, something I’ve said, oh, a few thousand times.

Here’s a data point for you, if you like: I read the omnibus edition of Empire of the East, and didn’t care for it. I got that it was pulp, and competently done, but for me it was a bit too pulp, the characters a bit too flat. But then I reeeally liked the Books of Swords. Those were a lot more engaging, though they weren’t much less pulpy — there was just enough extra character stuff going on that they worked for me. Plus, there was a real mythic sense to the twelve swords he created; those things were awesome in both senses of the word. I’ll be interested to see what you think.

(I’ll also note that I may have been oversold on Empire of the East from Larry Niven’s introduction, in which he said it was a better book than The Lord of the Rings. Which … convinced me not to trust Larry Niven’s taste in books thenceforward.)

I too thought Niven’s intro was a bit much, though I did like the book. Disappointing reading experiences via blurb inflation would be an interesting topic – I’ll always believe that one of the reasons I didn’t care much for Silverlock was because Poul Anderson overpraised it so much.

@Matthew – Totally get that. I wonder how much my friends’ love of these books affected my liking the now? I’m glad to hear that about the Swords books. For three short books I flattish characters is ok, but beyond that might indeed be a chore.