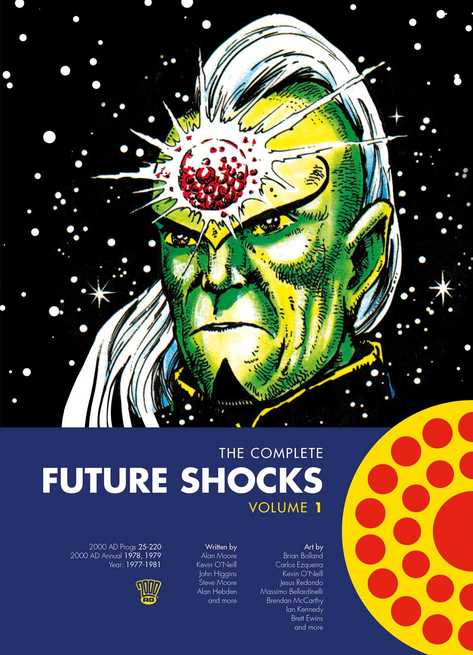 In my ongoing study of comic history and the craft of comic storytelling, I’ve looked at the history of 2000AD, Alan Moore’s Halo Jones, and the density of comic layouts, in part because as a novelist and short story writer, I’m trying to learn things from other story forms. And comics have a lot to teach me about pacing, conciseness and story density.

And in no place are stories more dense than in 2000AD‘s Futureshocks. These are stories that range in length from 1.5 pages to 4 pages (basically 6-20 panels). Luckily for me, 2000AD is issuing a collection of their first 5 years of Futureshocks in The Complete Futureshocks Volume 1, and they sent me a review copy.

The Complete Futureshocks Volume 1 is over 300 pages of comics, which by my rough count is about 80 individual stories ranging in length from 1.5 – 4 pages, with a few rare ones that stretched across two issues and totalled 6-8 pages.

What did I learn from all these very brief science fiction stories? A few things.

First, I expected the stories to be very dense, like with more panels per page than American comics of the time. That wasn’t the case at all. While I saw the occasional Futureshock page with 7 panels, usually they were 4-6 panels and often only 3 or 4 if they contained half of a splash page. 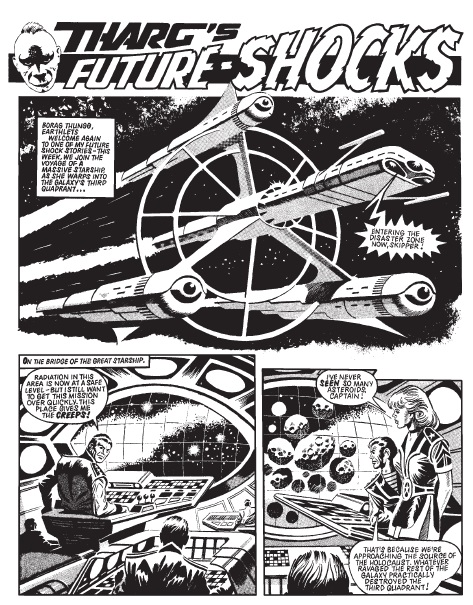 This seemed a bit weird at first, but maybe I was expecting full-sized stories to be told in less space. That’s of course not the case any more than a short story is a novel told in less words.

The differences between a novel idea and a short story idea are usually huge reductions in the number of characters and subplots, the duration of time in the story and complexity of the main plot. The narratives to be told with short stories are different from the narratives that would need a novel to tell. Similarly, Futureshocks contain stories comprised of fewer beats.

Second, from some advice I’d seen online about writing Futureshocks, 2000AD looks for more than one twist-ending sci-fi O’Henry stories. The modern Futureshocks in the weekly progs are certainly complex and follow that form.

But many of these early ones, especially the ones less than three pages, were 1-twist stories like the “Ringo, don’t touch that button” tale, “time travellers, don’t interfere with anything in the past,” or a simple science fictional “hoisted on their own petard” story. That kind of hinted at the complexity of the story that could be developed within 2-3 pages.

That being said, in the 3.5 to 4 page Futureshocks did follow the two-twist form, with alien invader clone infiltrators, surprise genetically-engineered defenses against alien invaders and so on. 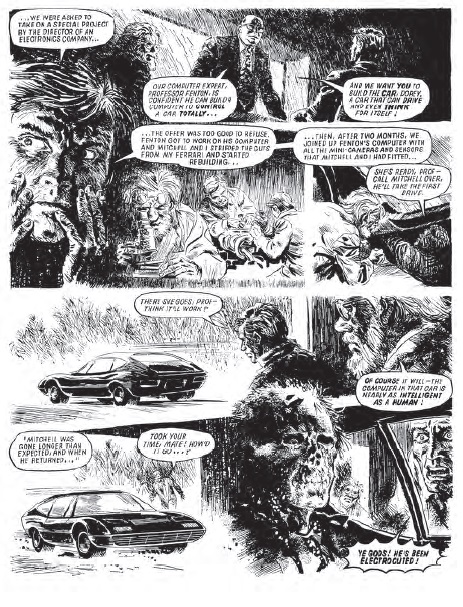 Thirdly, I noticed that artistically there is very little use of negative space. At all. There’s space for the word balloons, but every other bit of panel area is filled with information, either to replace exposition, or to evoke mood and setting. This under-use of negative space is reminiscent of the way space was used in the Master of Kung Fu books of the 1970s. 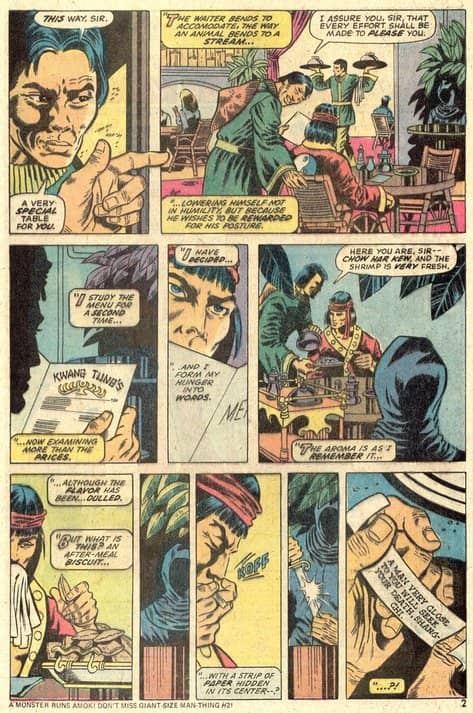 And in some ways, I think they had similar challenges. Futureshocks had 4 pages and concise stories. Master of Kung Fu had 17 pages with very complex stories, mixed motivations, slow double-crossed, and martial arts. So both kinds of stories converged on similar storytelling approaches to make sure that the stories fit. 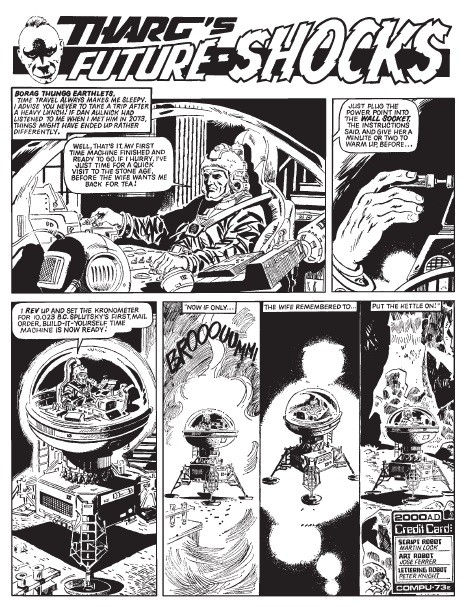 I also think it’s worth saying a few things about the art. In Thrill-Power Overload, the editors of 2000AD of that early era expressed a lot of frustration with their difficulty in getting artists who could do the job well. So I’d braced myself for perhaps sub-stellar art, but I needn’t have. 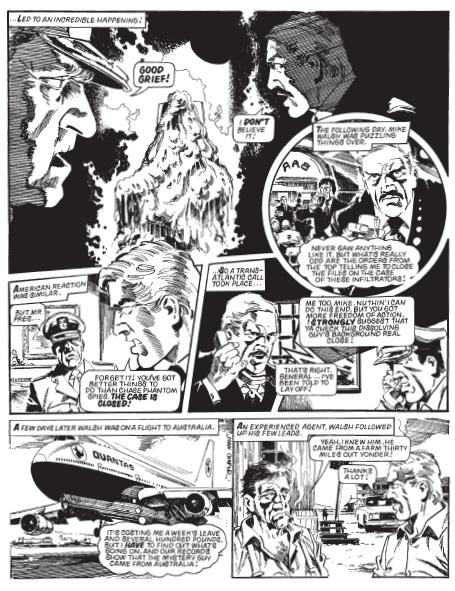 Maybe compared to Marvel and DC of the time, 2000AD might have felt like it wasn’t reaching the artistic level they’d set for themselves, but in my read of Image titles, the increasingly broad stylistic range of Marvel art, and in webcomics and works from smaller presses, I’ve learned that a lot of different art styles can tell a story. Looking back with today’s reading experience on the art of early 2000AD, I thought it told the story well and has a kind of rough energy that could have fit with a lot of today’s publishers.

My learning will go on, and The Complete Futureshocks was a really valuable read for me as a writer trying to understand the density and compression and pacing of very very short comic books stories. This will help me in my own prose writing and I’ll try out some short comic works as well. Whether or not you’re trying to study the writing craft, The Complete Futureshocks is a fun, energetic, sometimes funny read full of old school sci-fi stories and worth checking out.

Derek Künsken writes science fiction and fantasy in Gatineau, Québec. Next month, he’ll be teaching a couple of days of a “writing science fiction” workshop in Beijing before participating at the first Asia-Pacific SF Conference as a special author guest along with such notable Hugo-winning authors as Terry Bisson and Peter Watts and others.

It’s been a long time since I’ve read the short FUTURE SHOCKS in 200AD. I think I first discovered them in Alan Moore’s two-volume Future Shock collections from the 80s (which I think included his marvelous DR & QUINCH tales?), which were re-packaged into a single-volume collection by 2000AD in 2011. Glad to see there’s a lot more to them than that! 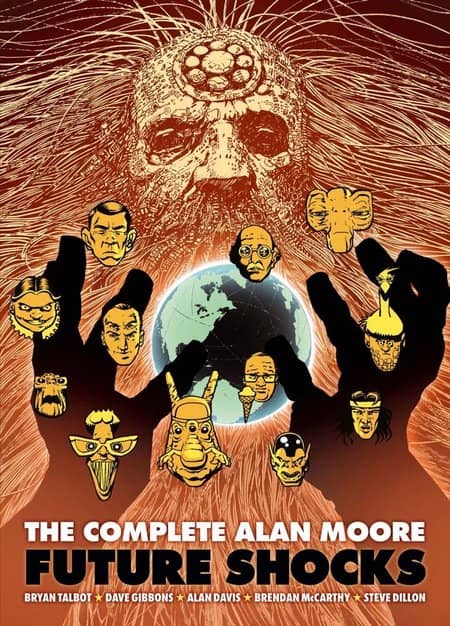