Almost exactly a year ago Chaosium announced a brand new edition of RuneQuest, one of the oldest and most acclaimed RPGs on the planet. While that was great news for many gamers, it did leave the folks at The Design Mechanism in the lurch — their lovingly crafted RuneQuest sixth edition, written by Pete Nash and Lawrence Whitaker, was the best version of the game in decades, and now they’d lost the license.

The Design Mechanism folks had also supported their version with some of the most exciting releases we’d seen in years, including the Book of Quests, Shores of Korantia, and especially the brilliant Monster Island. While I was curious to see what Chaosium would do with the property, I was chiefly concerned with how the announcement would impact them.

Of course, I needn’t have worried. You can’t keep an outfit as creative as The Design Mechanism down for long. Without missing a beat they released their own full-fledged RPG system, Mythras, which picked up and elaborated on the work they’d done with sixth edition RuneQuest, while simultaneously expanding the rules to accommodate more diverse game settings, from Sword & Sorcery to Science Fiction and Urban Fantasy Horror. They also revamped all of their existing back catalog — including the irreplaceable Monster Island — to bring it up to date with the new system. And best of all, they’ve continued to release top notch new products, like Pete Nash’s fabulous Mythic Rome.

While there have been other fine role playing supplements set in ancient Rome — GURPS Imperial Rome, Cthulhu Invictus, and Fraser Ronald’s Centurion and Sword Noir all spring to mind — I can guarantee you’ve never encountered an ancients supplement as richly imaginative as Mythic Rome. As he’s amply demonstrated over the years, Pete Nash is blessed with a profound understanding of what really brings a game setting to life: boundless potential for adventure. This book is bursting with ideas on virtually every page; the kinds of story hooks and campaign suggestions that will quicken the hearts of gamers and game masters alike.

What’s so fabulous about Rome as a setting? Pete sums it up in two short paragraphs:

Ancient Rome is often an incomprehensible blend of tradition, superstition, honour and treachery. Its very strangeness is its attraction and the fluid hierarchy of family status, wealth and patronage present a fantastic opportunity for a Games Master to raise his beginning characters from obscurity to the leading magistrates of the city. Or even the other way around, falling from nobility to become criminal gang leaders, or even revenge-driven slaves. Nothing is impossible because at the time, nothing was…

Role-playing games set in ancient Rome possess the potential for an incredibly diverse range of events. Scenarios can include such things as wars, criminal gangs, politics, corruption, slave uprisings, gladiatorial combat, chariot racing, subversive religious cults, floods, fires, pestilence, supernatural manifestations, noxious sewers, riots, fantastic beasts, looting and pillaging foreign cities — the scope is near limitless. A good campaign will mix these differing occurrences together; keeping a couple as the core thread which draws the characters along, whilst others can provide exciting diversions.

One of the things I most enjoy about Pete’s writing is that he’s not shy about suggesting modern writers for inspiration — including plenty of names that will be intimately familiar to Black Gate readers.

Here’s a great example from the section on Alternate Campaign Styles.

A fantasy Roman campaign would place the city in [a] world full of mythological creatures and real gods, the most obvious being those of Greek derivation. This would permit spectacular scenes of Minotaur gladiators in the Circus Maximus, Sea Serpent drawn war galleys, or Jupiter himself casting lightning bolts to obliterate enemy generals. The setting need not be classical of course; a group of Romans or even the entire city itself could be transported into an alternate world full of wizards and monsters, as in Harry Turtledove’s Legion of Videssos series…

What if a Roman adventurer, whilst exploring a ploutonion, discovered that the underground tunnels suddenly transformed into metal corridors? Or an exiled explorer climbing the highest peaks of the Alps or Atlas mountains sees the edge of the world on the other side? Rome and its surroundings could be a replica built on a gargantuan scale on an artificial world. Maybe the joke or social experiment of an advanced civilization such as those described in Iain M. Banks Culture novels or Philip Jose Farmer’s World of Tiers. The campaign could center on exploring or escaping from the construct or ever battling their hitherto undiscovered alien masters or neighbors. David Drake’s stories “Ranks of Bronze” and “Lambs to the Slaughter” offer the idea of a Roman legion being sold into service as primitive mercenaries for an advanced alien race.

There are countless more examples I could quote you, but I’ll content myself with one final sample, from the section on Mythological Creatures.

The spirits of the dead, Lemures are objects of particular dread to the average Roman. Many festivals are held annually to placate the hungry dead and show them proper respect. This is extremely important since three days each year the stones covering the gates to the underworld were opened and ghosts were free to walk the streets of Rome… 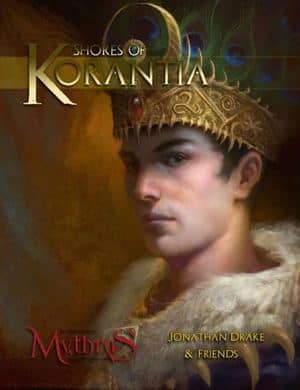 There’s a whole lot I could do with a story hook like that.

There’s a lot more to Mythic Rome than just Pete’s highly readable prose. The book is packed with plot seeds, a detailed historical timeline, mini-biographies of famous Romans — there’s even an appendix on latin profanity. It’s everything you need to craft an epic setting for your ancient Roman campaign, and a lot more.

The book is also copiously illustrated by David Benzal, Dan MacKinnon, and Colin Driver, and the spot art does a lot to liven up the text and fire the imagination.

Our previous coverage of books by the Design Mechanism includes:

See all of our recent Role Playing Games coverage here.

There has been an interesting discussion at Monsters and Manuals about the Mediterranean and Cultural Coolness. http://monstersandmanuals.blogspot.co.uk/2018/03/the-mediterranean-and-cultural-coolness.html?m=1
The question posed was why RPGs constantly return to the same few settings – Rome amongst them. The collective answer was that the existence of a few immediately accessible tropes empowers the table, whereas the choice of an exotic culture can be rebarbative. I believe this product too is a reissue, having previously been published for Basic Role Playing. Good luck to the Design Mechanism who are consistently excellent. It was a shame they ran afoul of the Seattle Farmers’ Collective.

This looks like a great supplement. Bravo, Design Mechanism and a Thank You to Black Gate for putting a spotlight on some very talented game designers.