I didn’t even know one of my favorite SF sub-genres had a name. But it does, and over at Unbound Worlds Matt Staggs tells us what it is.

In a gothic space opera, pseudo-medievalism, superstition, insanity, and decay are juxtaposed with space travel: a perfect embodiment of progress, science, and rationality. The starship becomes a stand-in for the haunted mansion, and the universe at large the misty moors that surround it.

Cults, all-powerful religions, and demonic forces are commonly found in the genre, and the wear and tear of space travel — time dilation, and the assumption of death-like states of suspended animation for examples — on human relationships are often emphasized. Human life far from civilization becomes stranger, perhaps even hostile. In gothic space opera, human beings become the aliens they fear.

Gothic space opera! It’s like Dracula married Star Wars and they had a little goth space baby. Matt says gothic space opera is “Movies like Event Horizon and Sunshine, the popular wargame franchise Warhammer 40,000, and the video game Dead Space.” I like all those things, so I’m on board (I also like Alien, the ultimate haunted-space-ship movie, but maybe that’s a separate sub-sub-genre or something. I don’t question the experts.)

It was probably Warhammer 40,000, with its exciting tales of the Dark Ages of a vast galaxy-wide empire paralyzed by superstition and constant warfare, that really cemented my love of this brand new sub-genre. Matt suggests some excellent starting points for curious fans; and this is where I really paid attention. Here’s a few of the highlights. 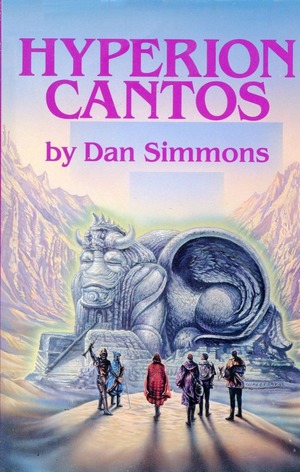 Hyperion’s Canterbury Tales in Space narrative of pilgrims swapping stories en route to an otherworldly shrine haunted by a demon-like creature known as the Shrike would seem to be the archetypal gothic space opera. Strange cults abound, including the nature-worshipping Brotherhood of Muir, and the Church of the Final Atonement, which reveres the Shrike as an avatar of the Lord of Pain. Toss in a doomed, crumbling city in the sand, a massive, shrine-like space ships, an ancient prophecy or two, and you’ve got everything a fan of gothic literature could ever want.

Hyperion won the 1990 Hugo and Locus Awards for Best Novel, and is the first part of the four-part Hyperion Cantos.

A genetically resurrected vampire guides a group of post-human freaks to a dark rendezvous with an alien intelligence. What they discover there has vast implications for humanity, and none of them are good.

Blindsight was nominated for the Hugo, Locus and Campbell Memorial Awards for Best Novel.

A decorated war hero is given what should be a plum assignment before retirement: decommission a research station orbiting a mysterious star on the fringes of civilized space. What he finds upon arrival is a crew driven to the brink of insanity by frightening and inexplicable phenomena: disembodied voices, terrifying visions, and more.

The Burning Dark is the first novel in the Spider War trilogy; it was followed by The Machine Awakes (2015) and The Dead Stars (2017).

BLINDSIGHT is brilliant. So is HYPERION, in its very different way.

I’m with Rich: Blindsight is so amazing. It not only could fit into the “gothic space opera” category (but does anyone except Unbound Worlds use that name?), it’s also hard sci-fi.

The book’s explanation of why vampires have problems with crosses (which may be in a footnote (?)—it’s been a long time since I read the book) is, to use Rich’s term, brilliant.

I’ve never read BLINDSIGHT…. but clearly I need to correct that!