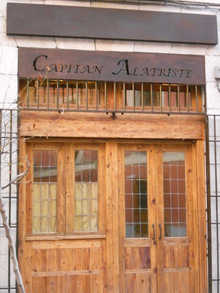 It’s often struck me that writers get more respect in other countries than they do in North America (I’m thinking specifically Europe here, since that’s the limit of my experience). When I told my (Spanish) mother as a child that I was going to be a writer when I grew up, she asked why was I wasting time talking to her, why wasn’t I getting started?

When a friend told her (Canadian) mother she wanted to be a writer, her mother told her she’d never make a living that way, and that she should go to law school. My mother recognized writing as a profession, and she further recognized that many writers do “other things” in order to live, because the writing doesn’t always pay. She always told people “my daughter is a writer” regardless of what I was doing to pay the bills.

When I tell non-writing strangers in Canada that I’m a writer, they ask me how much money I make; when I tell them I write fantasy, they either say “I don’t read that stuff” or they want to know why my books haven’t been made into a TV series. In Spain people congratulate me when they learn I’m a writer, are impressed when I say I write fantasy, and want to know if my books have been translated into Spanish.

I recently met with a lawyer in Granada. Knowing that I was a writer, she’d read three of my books in order to be ready for the meeting – which had nothing to do with writing. Turns out she’s a big fantasy fan.

There’s a bar in the Plaza Mayor in Madrid called Los Galayos. There used to be a signed photograph of Arturo Perez Reverte on the wall. In the dedication (to the owner) Perez Reverte explained that he’d come up with the premise for his Captain Alatriste novels while in the bar. The photo had to be taken down, because too many people tried to steal it, even though it was bolted to the wall.

It’s been replaced by a signed photo of John Lennon. Apparently that’s less likely to be stolen. Spaniards love writers, but they love Spanish writers the most. 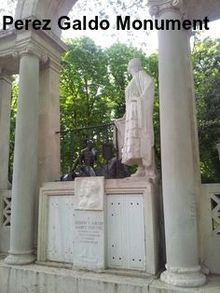 Maybe the photo isn’t all that vital now, since there’s a whole restaurant called “Alatriste” that honours the Captain. It’s a bit upscale, however, and to me it seems like the kind of place that wouldn’t let Diego Alatriste in – at least, not without cleaning him up a bit.

Writers are often associated with places, like the Round Table in the Algonquin Hotel. Madrid had – and still has – its equivalent in the “Gran Café de Gijon,” found in the Paseo de Recoletos. The Café has been in business since 1886, and is famous for its “tertulias” or salons made up of the writers, artists, and journalists who meet there. The place has been the regular hang out of writers such as Ramon María de Valle-Inclan, José Canalejas . . . . and yes, Arturo Perez Reverte. Then there’s the Café Gijon Prize for literature, given out annually. 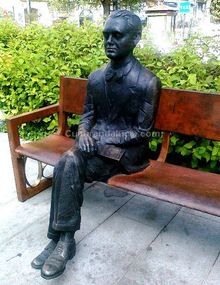 Spain celebrates its literature, and the writers behind it, in some very tangible ways. There’s a monument in the Retiro Park to Benito Perez Galdos, which depicts a scene from one of his 19th-century romantic novels. He’s sort of a Walter Scott kind of writer. My grandfather once told me that live readings of his work were given at the monument every year. I couldn’t find out if it’s still done.

Of course there are writers who are better known to non-Spaniards, like the poet and dramatist Federico Garcia Lorca. There are at least four different statues of him in Granada, but my favourite is the one in I picture here, in the Avenida de la Constitución. Benches line the broad paseo running down the centre of the Avenida, and every bench has a statue of a Spanish artist, whether writer, painter, musician, or dancer. It’s a great way to introduce the arts to children, and a lot of fun for adults who like to be “seen” with important people. It’s a better idea, I think, than a walk of fame.

And then there’s always Miguel de Cervantes. There’s no one more important to Spaniards than the creator of Don Quijote. Windmills are maintained in La Mancha in his honour. The brandy “Lepanto” was named after the sea battle in which Cervantes received the injury that turned him to writing. Almost every year sees a new edition of the novel, often with new illustrations. The one I have was illustrated by Salvador Dali. Probably the best known monument to the writer and his creation is in the Plaza de España in Madrid.

Too bad we don’t have more statues and monuments of writers.