Russian science fiction writers Boris and Arkady Strugatsky are the authors of a pair of acknowledged classics, Hard to Be a God (which Zeta Moore reviewed for us here) and Roadside Picnic (1977). Their books were introduced to a broad audience in the US in the 1970s by Donald Wollheim at DAW Books. Over a dozen of their novels have been translated into English, including The Ugly Swans (1972), The Final Circle of Paradise (1976), Monday Begins on Saturday (1977), Prisoners of Power (1977), and The Time Wanderers (1987).

When I recently discovered there was a Strugatsky paperback I didn’t have, The Snail on the Slope, it was bittersweet. On the one hand, it’s always a delight to find a new object of interest. On the other hand, copies on eBay started at $30, and on Abe Books anywhere from $40 and up. (I suppose I can’t be too cranky. The vast majority of genre paperbacks from the 70s and 80s have declined in value over the past 40 years; it’s good to see the vintage paperback market has at least a few hot spots.)

But what’s the deal with the skyrocketing prices for a pair of relatively obscure Soviet-era science fiction writers? Fifteen years ago you could have had virtually any of their paperbacks for a song.

Their books never really sold well in English, and they were almost never reprinted, so copies are pretty scare. Their fame continues to grow here in the States as more and more readers discover their work (although it still has a long way to go before it approaches their reputation in Russia). As any economist will tell you, the combination of tight supply and rising demand is a sure recipe for rising prices — and sure enough, their books command extraordinary prices today, even in paperback.

The Snail on the Slope is a legit scare find, even for a Strugatsky novel. It was reprinted in the US by Bantam Books in March 1980, with a translation by Alan Meyers. And according to an article in the March 1980 issue of Locus, this edition is even scarcer than the low print-run DAW titles, as the entire print run was recalled due to an “inaccurate” blurb on the back cover (which stated “Boris and Arkady Strugatsky… are now in disfavor with the Soviet government for the bold, outspoken ideas expressed in this novel.”) Distribution was halted, and the publisher took the unusual step of contacting bookstores that had already received the book to ask them to return it for destruction. 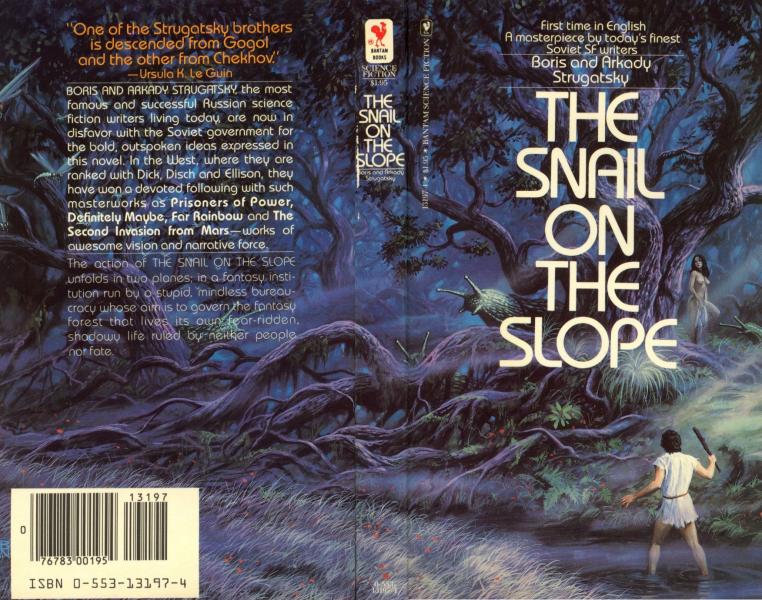 Despite the fact that the book virtually vanished from shelves weeks after it was published, it reach at least a few readers. The Chicago Review Press called it “A hugely respected science fiction classic,” and have announced a brand new translation will be available this August.

The Snail on the Slope takes place in two worlds. One is the Administration, an institution run by a surreal, Kafkaesque bureaucracy whose aim is to govern the forest below. The other is the Forest, a place of fear, weird creatures, primitive people and violence. Peretz, who works at the Administration, wants to visit the Forest. Candide crashed in the Forest years ago and wants to return to the Administration. Their journeys are surprising and strange, and readers are left to puzzle out the mysteries of these foreign environments. The Strugatskys themselves called The Snail on the Slope “the most perfect and the most valuable of our works.”

That didn’t diminish my interest in the 1980 Bantam paperback. However, scarcity and high demand are tough to negotiate against. Still, when it comes to collecting, the ultimate virtue isn’t a huge budget, but rather patience… and a tolerance for risk doesn’t hurt. I put a Saved Search in place on eBay last month, and in less than two weeks a copy in “Good Condition” showed up from a thrift store seller — without a picture. Asking price: $6.77, including shipping.

I took a chance, and what arrived in the mail yesterday was the copy at the top of the page. It appears unread and, while there’s a little scoring on the back and it lost a few hit points in shipping, overall I’m extremely pleased with it.

The Snail on the Slope was translated by Alan Meyers and published by Bantam Books in 1980, and is ascreprinted in a new translation . It is 244 pages (including a 20-page intro by Darko Suvin), priced at $1.95. The cover is by Bob Larkin.

Just a guess, but one factor that occurs to me about the pricing is that interest in Roadside Picnic has recently risen in the West because of its basis for the movie Stalker, and each in turn inspired the STALKER video game trilogy.

!! I had no idea. You’re right, that makes total sense.