The World Fantasy Convention is my favorite convention by a pretty fair margin, and the highlight of the con every year is the presentation of the World Fantasy Awards. They were first given out at the very first World Fantasy Convention in Providence, Rhode Island in 1975, and they’ve been awarded every year since. The list of recipients is like a Who’s Who of the major authors in the genre, and the award has come to be the most significant honor in American fantasy, alongside the Nebula and Hugo Awards (both more generally given to works of science fiction).

The Nebula Award winners are collected annually in the Nebula Awards Showcase, which has been continuously published for 51 years (we covered the latest volume, edited by Julie E. Czerneda, here), and the Hugo Winners were famously collected in some of the most popular SF anthologies of all time, Isaac Asimov’s The Hugo Winners, which ran to multiple volumes (we looked at that series here). But even most SF collectors are unaware that there are two volumes collecting World Fantasy Award winners, originally published in hardcover by Doubleday in 1977 and 1980.

It’s not a big surprise that these books aren’t better known. Only two volumes were ever released, and neither had a paperback edition. Copies are generally quite scarce.

Which is unfortunate, as these are fine books, if a little quirky. The first was published two years after the first WFC in 1975, and the second appeared five years after that. Unlike the Hugo volumes they don’t just contain the winning stories and, unlike the Nebula volumes, they also include a significant number of older reprints, some of them going back decades. 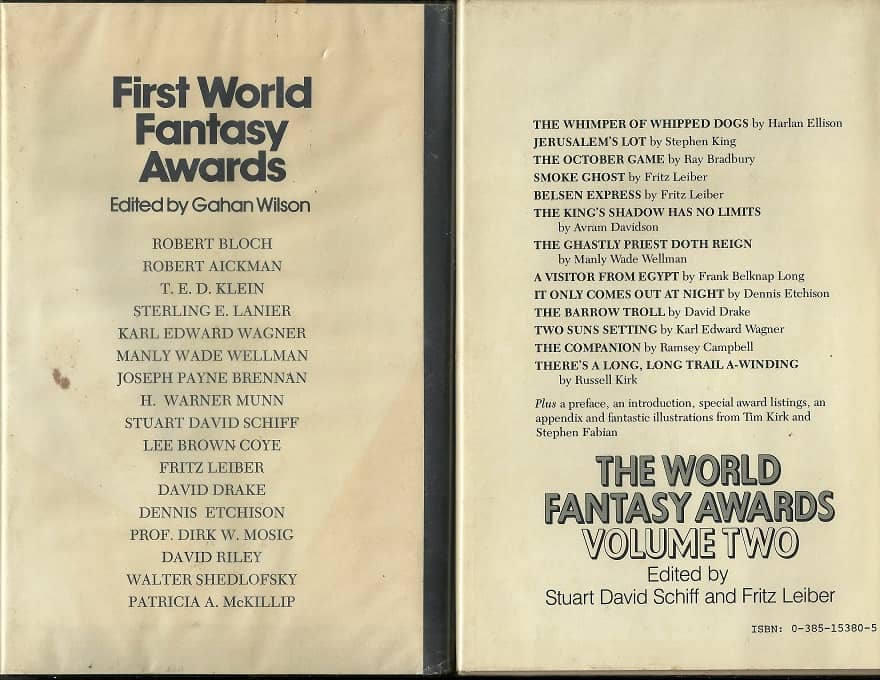 I think the reason I like these books so much is because of their quirkiness. There’s a joyous, celebratory air to both volumes, and if the Table of Contents don’t completely make sense, that because a really good party doesn’t make much sense either. Both books are packed with award-winning fiction, poems, reprints, con reports, chummy biographies, acceptance speeches, author appreciations, novel excerpts, occasional artwork, and even a hand-drawn map of H.P. Lovecraft’s Providence by Gahan Wilson.

That’s not a mix you see every day. These books are as close are you’re likely to come to experiencing a really fine SF convention on paper.

The first thing you should probably know is that, in the early days of the World Fantasy Award at least, only one work of short fiction was recognized each year. It’s pretty hard to build an anthology around a single story, no matter how damn good it is. The editors filled the rest of their books with fiction celebrating each of the winners, including winners in the Life Achievement, Novel, Collection/Anthology, Artist, and Special Award categories, plus earlier and later fiction that (far as I can see) had nothing to do with the convention. Go figure.

Let’s start with the actual winners of the World Fantasy Awards. In 1975 they were:

Here’s a closer look at each volume.

First World Fantasy Awards was edited by Gahan Wilson. It contains a Fafhrd and the Gray Mouser tale from 1973, an excerpt from Best Novel winner The Forgotten Beasts of Eld by Patricia A. McKillip, the classic Cthulhu Mythos tale “Sticks” by Karl Edward Wagner (1974), and a 1972 novella by T. E. D. Klein published three years before the convention. (Why is that in there? I have absolutely no idea.) Here’s the complete TOC.

Introduction by Gahan Wilson
The Convention, by Kirby McCauley
About the Fantasy Awards, David G. Hartwell
The Awards, Gahan Wilson
“The Bat Is My Brother” by Robert Bloch (1944)
“Beetles” by Robert Bloch (1938)
Acceptance Speech, by Robert Bloch
About Robert Bloch
An excerpt from The Forgotten Beasts of Eld, by Patricia A. McKillip
An Essay by Robert Aickman
“Pages from a Young Girl’s Journal” by Robert Aickman — winner
“The Events at Poroth Farm” by T. E. D. Klein (1972)
“A Father’s Tale” by Sterling E. Lanier
“Sticks” by Karl Edward Wagner
“Come Into My Parlor” by Manly Wade Wellman (1949)
“Fearful Rock” by Manly Wade Wellman (1939)
About Manly Wade Wellman
The Ballantines
Lee Brown Coye // An Appreciation, by Gahan Wilson
“The Bait” by Fritz Leiber
The Vampire in America, Manly Wade Wellman (essay)
“The Shortest Way” by David Drake
From “Chips and Shavings” by Lee Brown Coye (essay, 1963)
“The Soft Wall” by Dennis Etchison
Toward a Greater Appreciation of H. P. Lovecraft: The Analytical Approach, by Dirk W. Mosig
Cradle Song for an Abandoned Werewolf, H. Warner Munn (poem)
The Abandoned Boudoir, Joseph Payne Brennan (poem)
Guillotine, Walter Shedlofsky (1970, poem)
“The Farmhouse” by David A. Riley (1971)

First World Fantasy Awards was edited by Gahan Wilson and published by Doubleday in October, 1977. It is 311 pages, priced at $8.95 in hardcover. It has never been reprinted, and there is no digital edition. The cover is by Gahan Wilson.

Volume Two offers a Kane novelette by Karl Edward Wagner from 1976, a Doctor Eszterhazy story by Avram Davidson from 1975, a Harlan Ellison tale from 1973 (??), a Stephen King tale from 1978 (two years after the convention?!) and a bunch more stuff. The selection doesn’t make a lick of sense in the context of the awards, but it sure makes for a readable anthology. Here’s the complete TOC.

The World Fantasy Awards, Volume Two was edited by Stuart David Schuff and Fritz Leiber, and published by Doubleday on September 19, 1980. It is 283 pages, priced at $10.95 in hardcover. It has never been reprinted, and there is no digital edition. The cover is by Roger Dean.

The only real drawback to these books is that they’re both a tough find. I did manage to locate reasonably priced copies after many years of searching, but both are ex-library editions, which means they’re a little rougher than I’d like. They were’t expensive, but if you want these in your library — even cheap battered copies — be prepared to hunt for them.

Sigh. If only anthologies were more popular, there’d be more of these.

I can’t help thinking that a retrospective anthology, collecting short fiction winners of the World Fantasy Award down through the years, would be a spectacular offering. Much like the first two volumes of Asimov’s THE HUGO WINNERS, which remained in print in an omnibus edition for decades (and was the one book you could count on EVERYONE having read in the old days.)

Ahh, I have the second, not the first. Thanks for giving me another title to look for, John!

There are a number of copies of both books listed on abebooks.com; reasonably priced, too, by my standards. Search for world fantasy awards in the title field.

Good lord! The quirky contents don’t seem to make a lot of sense, unless the modus operandi was: “Let’s put together a collection that would most appeal to Nick Ozment in the year 2018.” Damn those are some fine collections. Going to eBay right now…

…Back from eBay. Just ordered both. Ex-library editions, but got ’em both for under 11 bucks.

P.S. Interesting how strongly weighted both those volumes are to horror.

I tried Dr. Eszterhazy as my first introduction to Avram Davidson. I loved the voice which felt perfectly right for the time period the books are set in. But the density of historical allusion mixed with the alternate history made me feel like I needed to have a definitive scholarly work on the Austro-Hungarian Empire open on one knee at all times if I wanted to get half the jokes. Is there a better starting point for a newcomer to Davidson, or is all his stuff like that?

Oh, and speaking of World Fantasy, John, will you be in Baltimore for it this year?

> There are a number of copies of both books listed on
> abebooks.com; reasonably priced, too, by my standards.

Thanks for the tip! I had a look this morning, and quickly found around a dozen copies priced between $4 – $8.

These are books that don’t show up much on the convention circuit — probably because there are no paperback editions, and they’re too cheap for rare book vendors to bother carrying them. In any case, there’s plenty of online sellers to chose from for readers who are interested!

> Thanks for giving me another title to look for, John!

> The quirky contents don’t seem to make a lot of sense, unless the modus operandi was:
> “Let’s put together a collection that would most appeal to Nick Ozment in the year 2018.”

Glad you were able to track down copies. If you enjoy them, I’d love to have a full review for Black Gate.

> Is there a better starting point for a newcomer to Davidson, or is all his stuff like that?

Welcome back! We missed you around here.

And yeah, Davidson was a pretty learned guy, and that that showed up a lot in his writing. I haven’t braved any of his novels (like The Phoenix and the Mirror or Marco Polo and the Sleeping Beauty ), but have very much enjoyed his short stories. His collections include Or All the Seas with Oysters and What Strange Stars and Skies.

> Oh, and speaking of World Fantasy, John, will you be in Baltimore for it this year?

I would love to! I don’t have a membership yet (and it may well be too late). but once my travel schedule gets sorted out by late summer, I will make the call. Are you going?

Nick Ozment: “Interesting how strongly weighted both those volumes are to horror.”

That is interesting. Maybe that explains why HPL’s bust was considered, at the time, appropriate as the model for the World Fantasy Awards.