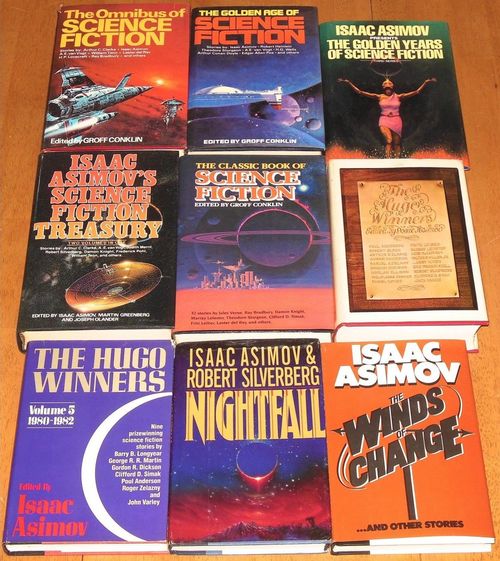 A while back I got a letter from a reader saying, “I love those photos you post of your eBay finds!” Well, that warms my heart. So here we are with another batch, a look at a lot of nine books I bought on December 11, 2016.

This one is interesting for a couple of reasons. First, it’s all hardcovers. Usually I spend my hard-earned collecting dollars on paperbacks, but this particular lot — a truly fabulous set of vintage anthologies from the late 70s and early 80s — was simply too tempting to pass up. Most of the books were in terrific shape, and even the ones I already owned (like The Hugo Winners — who doesn’t have a copy of The Hugo Winners?) made great replacement copies.

The other interesting thing about this lot was the price: I was the only bidder, and I won the whole shebang for just $4.95. That’s about 50 cents a book, for some of the best SF anthologies ever made. Man, that’s just criminal. 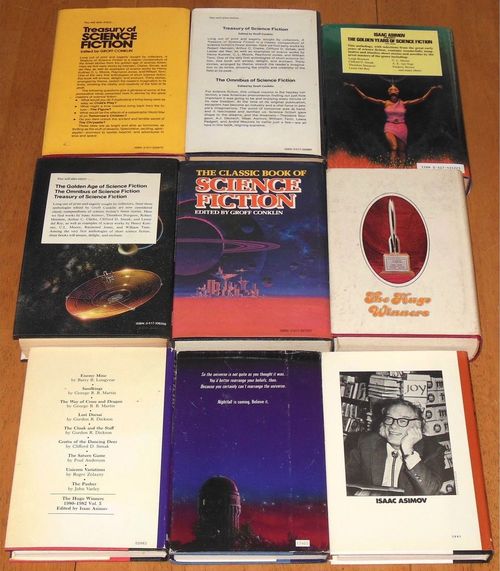 Now, hardcover SF lots go unsold on eBay all the time. While there’s still a market for vintage paperbacks, with the exception of highly prized publishers like Arkham House, Gnome Press, and other small presses, the same can’t be said for used SF hardcovers. So what’s so criminal about the lack of interest in this particular lot?

The problem is that these are top-flight books. 40 years ago, they would have formed a respectable cornerstone for a fine SF collection. And when a lot like this generates (virtually) no interest, it’s another indication that the current generation of readers is losing touch with the pleasures of the past.

Well, you know how I feel about that. Sure, SF is a thriving genre with a hundreds (if not thousands) of exciting new releases every year, and it takes a pretty committed modern reader to stay on top of even a fraction of it all. In any living genre the older material, no matter how great, gradually gets pushed aside by a new generation of classics — and that’s exactly as it should be. The same way Dune and The Lord of the Rings replaced The War of the Worlds and A Princess of Mars for my generation, books like A Game of Thrones and Harry Potter have become the new canon for the field. If those of us who still cherish older books expect them to be remembered (and we should, darn it!), then it falls to us to keep them alive. The odds are against us, but you know it’s a battle well worth fighting.

In that spirit, here’s a few hundred words on why every one of you dummies should have bid on this auction. I mean, seriously. 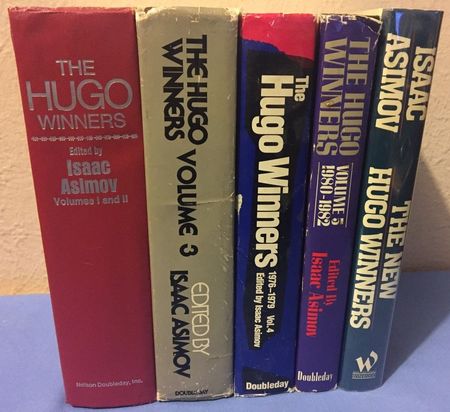 Let’s start with the obvious: Isaac Asimov’s The Hugo Winners.

I think there’s an argument to be made that The Hugo Winners is the essential starter book for any 20th Century SF collection. I know, you could say that it should be something like The Foundation Trilogy or Ender’s Game. But you’d be wrong. The Hugo Winners is a stellar introduction to the most important SF writers of the last century, and it contains some of the most vital and important SF ever published — including “The Star” by Arthur C. Clarke, “Flowers for Algernon” by Daniel Keyes, “The Big Front Yard” by Clifford D. Simak, “Repent, Harlequin! Said the Ticktockman” by Harlan Ellison, and “Time Considered as a Helix of Semi-Precious Stones” by Samuel R. Delany.

The Hugo Winners is really two books: The Hugo Winners, Volume One (1962), and The Hugo Winners, Volume Two (1971), together collecting every piece of short fiction to win a Hugo Award before 1969. The version that became a perennial bestseller for decades was the 860-page Science Fiction Book Club/Doubleday 1972 omnibus edition, the book that lured countless young readers to join the SFBC (me included — it was part of my introductory package). These two were the first in a series of seven volumes Asimov edited collecting the complete run of Hugo-award winning short fiction through 1987.

The Hugo Winners, Volume One

The Hugo Winners is a book I have returned to countless times over the decades, and always with great pleasure. A big part of the endless charm of this book, of course, is Asimov’s breezy and self-deprecating introductions, both for each volume, and for each individual story. When I first read it (way, way back in 1977), I couldn’t understand how any one person, no matter how famous, could know each and every one of these authors personally. It just didn’t seem possible. As I grew older, I learned just how small and friendly the field is… and the person who introduced me to that idea was Asimov. More than any other writer, Asimov taught us that Science Fiction is a community.

Next up are three classic Groff Conklin anthologies, all Bonanza reprints from 1978-1980.

All three of these huge books reprinted early pulp era SF, chiefly from Astounding, and were some of the earliest — and most successful — early genre anthologies. Conklin, an unknown at the time, convinced Crown Publishers to take a chance on this relatively new field of science fiction in 1946 with The Best of Science Fiction, and it paid off handsomely. The book remained in print for years and was reprinted right up into the 80s.

Conklin did multiple additional anthologies with Crown, and became one of the most respected editors in the field, editing SF, fantasy and horror titles (like Br-r-r-!). He died in 1968.

Bonanza, an imprint of Crown Publishers, placed low-cost reprints into places like Waldenbooks and other outlets.

The next three anthologies on our list are also Bonanza reprints, both omnibus editions edited by Isaac Asimov:

Isaac Asimov Presents the Golden Years of Science Fiction reprints one of my favorite anthology series in hardcover. The paperback editions of Isaac Asimov Presents the Great SF Stories were published by DAW and co-edited with Martin H. Greenberg. The series ran to 26 volumes, published between 1979 and 2001, each collecting the best stories published in a single year, beginning with 1939, which Asimov marked as the beginning of The Golden Age of Science Fiction. 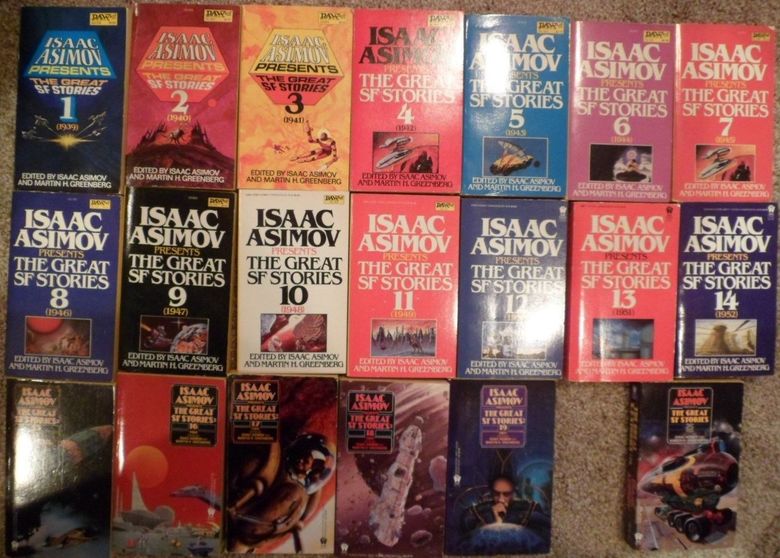 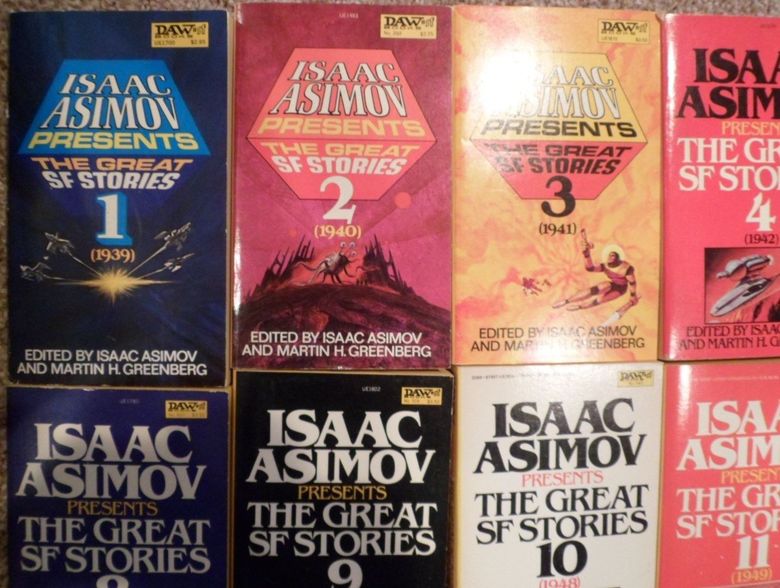 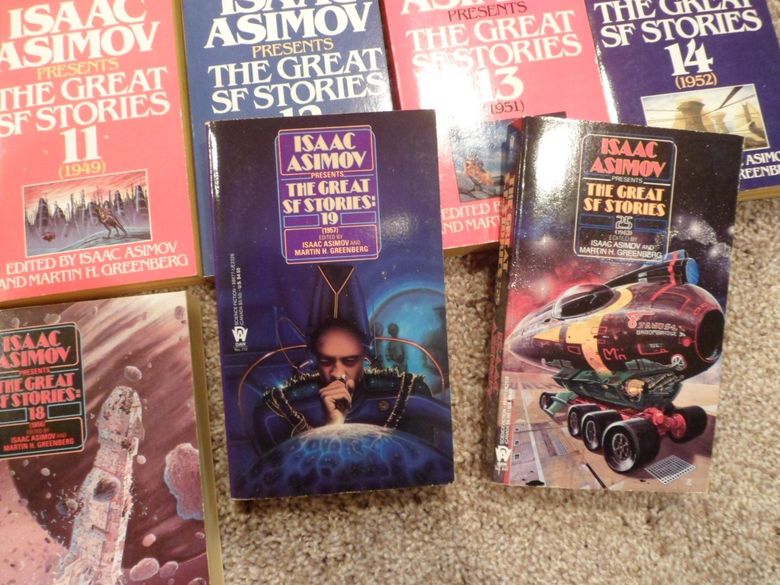 Each of the two hardcover Bonanza editions reprinted two paperbacks. The two in this set, Series One and Series Three, contain: 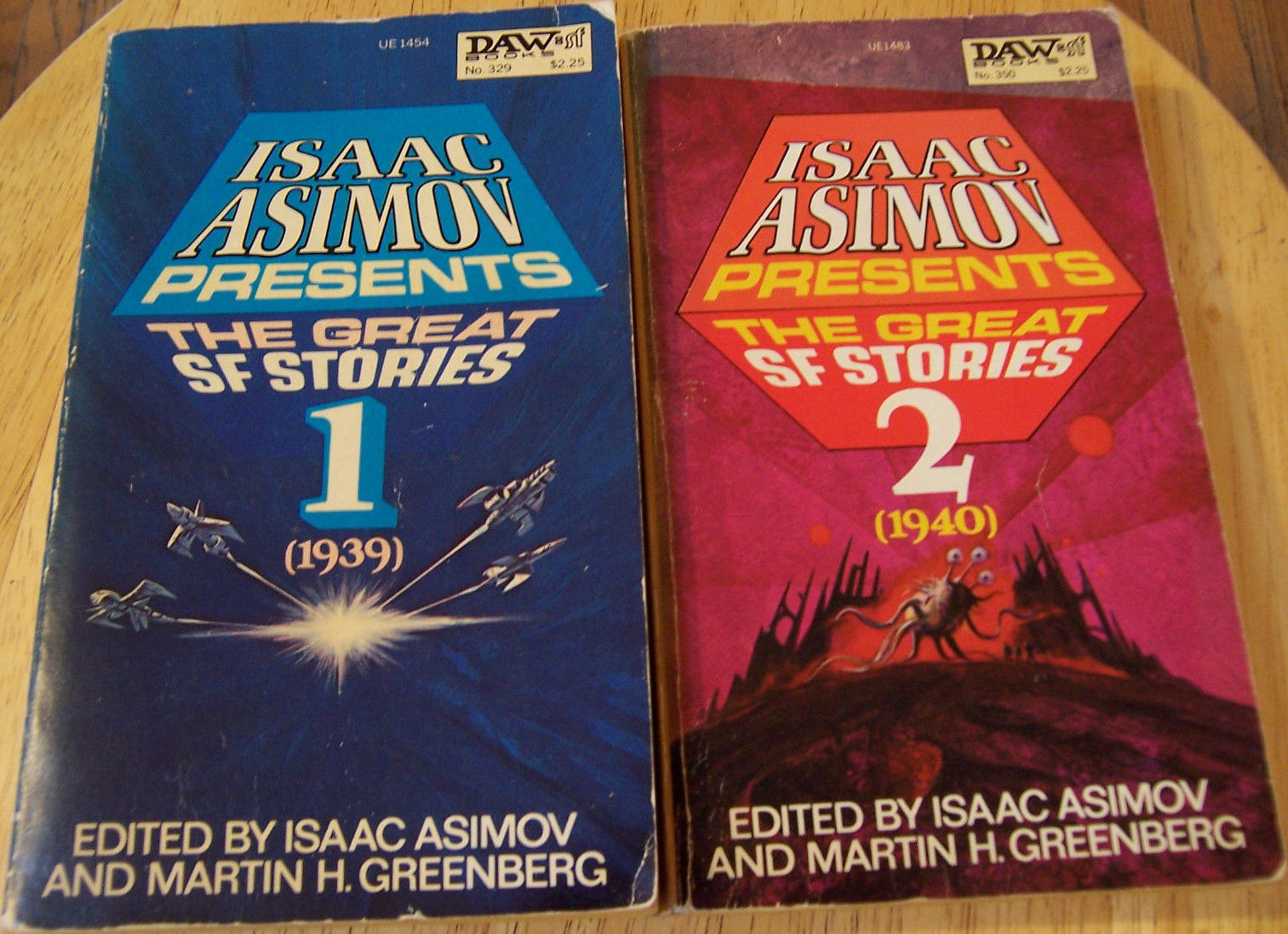 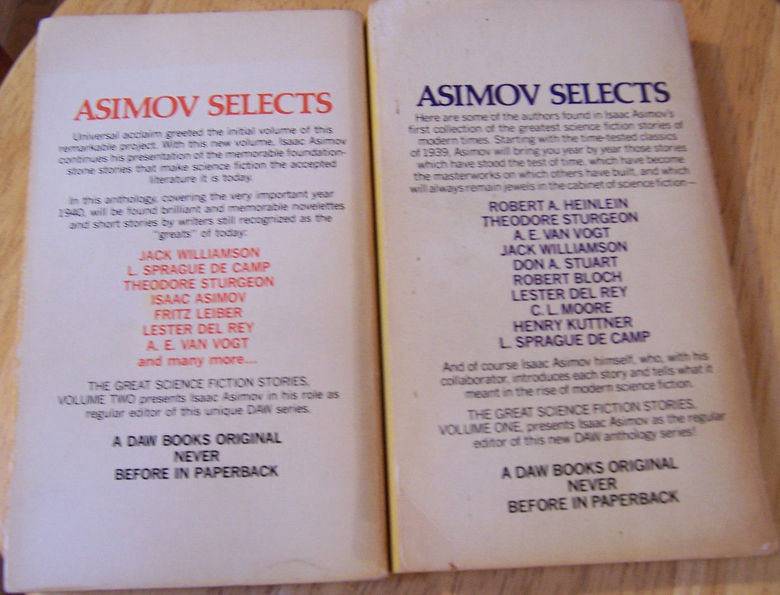 Plus Some Other Stuff

Also in this eBay lot were two non-anthologies, both from Doubleday: Nightfall (351 pages, November 1990, cover by Chris Moore), a collaborative novel between Asimov and Robert Silverberg, based on Asimov’s famous short story of the same name, and Asimov’s 1983 collection The Winds of Change and Other Stories (281 pages, $15.95 in hardcover, cover by Kiyoshi Kanai). Both are mostly just collateral damage, though they’re of interest if you’re an Asimov fan such as myself.

That’s it. The books in this lot represent several happy months of reading for modern and classic SF fans alike. If anything in this article has piqued your interest, shop around online for copies, or titles of similar vintage. My advice? Keep an eye out for lots, like this one, and pay attention to condition. Don’t worry too much if you get outbid your first few tries. There’s plenty of vintage lots out there, and a great deal to discover, and it doesn’t have to cost you a fortune. If you’re lucky, in fact, it can cost less than 5 bucks.

Wow, what a score! And they look pristine! I am jealous John. That said such a lot would have set me back in the region of USD 40 plus for postage to other side of world. Seriously miss surface mail.

I see the classic Allamagoosa by Eric frank Russel appears. It’s a bit of a backbone/must have in any Sci-Fi anthology:) still makes me smile, cool story.

I hope you bought a Lottery ticket after you scored those books! I’m one of those fans of your SF swag photos. Those books look like they’re brand new!

> I see the classic Allamagoosa by Eric frank Russel appears. It’s a bit of a
> backbone/must have in any Sci-Fi anthology:) still makes me smile, cool story.

That it is! Eric Frank Russell is someone who is almost totally forgotten today, which is a very great shame. He wrote some really terrific tales that I think still stand up well today.

> I hope you bought a Lottery ticket after you scored those books! I’m one of those
> fans of your SF swag photos. Those books look like they’re brand new!

There are in tip-top shape, which is terrific for 40-year-old books. Almost makes me want to find another set in battered condition, so I can have some reading copies!

Incredible score. Congrats. I have different editions of Omnibus and Winds of Change and don’t own the novel version of Nightfall but otherwise have all those. Looks like we like some of the same stuff.

I post because of a warning involving those “Golden Years” books. Too late for you (but you seem to have all the paperbacks) but I hope others don’t run into the same problem.

Authors of the cut stories include Brown, Leiber, Leinster, Padgett, Sturgeon, and van Vogt, so these were not subtle, well-judged cuts or a single story dropped by accident. I have all the cut stories in other books but don’t have Asimov/Greenberg’s commentary on those stories and others might not even be that lucky.

But, again, either way, that’s a ton of great reading at an incredible price.

OT: BTW: why do we have to register *and* fill in a “captcha”? (I’m pretty human and I’m terrible at reading these things.) Wouldn’t one or the other suffice?

Thanks for the head’s up on the Golden Years hardcover volumes! I hadn’t realized several volumes were abridged. That must be why the hardcover editions can be picked up for a pittance, and the original paperback editions are painfully expensive….

I have no idea why WordPress requires both a registration and a captcha, although bots have gotten sophisticated enough to register all on their own these days. We have a pretty consistent spam problem on the site (bots registering dozens of fake IDs every day and then posting spam comments to our high-traffic articles), and the captcha helps keep that manageable. Anyway. sorry for the inconvenience.

You’re welcome and thanks. It’s not that big of a deal. And, actually, these particular ones are easier to read than most so I haven’t gotten any wrong yet. 🙂