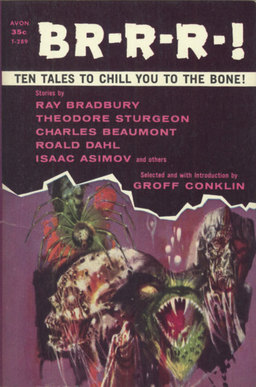 You’ve got to admire an editor who titles his anthology Br-r-r-! You just know it caused fits with distributors, book sellers, librarians and other folks who alphabetize books for a living.

Mind you, Br-r-r-! was Conklin’s 21st science fiction anthology, and I figure by that point you’ll do anything to break up the tedium a bit. It was released in 1959; by 1964 he was so desperate for new topics he was putting out books like Great Detective Stories About Doctors (um, what?). He eventually produced 44 anthologies, before (presumably) going crazy and locking himself in a lighthouse.

In any event, Br-r-r-! looks like a terrific collection, starting with that striking and original Richard Powers cover. Put that cover on a phone book, and I still might choose to read that over a lot of other stuff on the shelves in 1959. Just sayin’.

Here’s the back-cover text. If this doesn’t bring you back to the classic era of 1950s monster movies, then your education is seriously lacking.

THE MONSTER WORM that took 200 years to come up from the depths of the damned — it hated mankind!
THE BEETLE FROM HELL whose stinger brought slow, excruciating death — its evil eyes held the promise of something even worse!
THE LIVING CORPSE that commanded a graveyard. It sentenced a mortician to the bubbling bowels of hell!

And in “Legal Rites,” Isaac Asimov relates the fascinating — and gory — story of a blood-dripping specter fighting for its right to haunt a house. Asimov flavors pure horror with a unique brand of fantastic humor.

These are some of the blood-curdling, heart-pounding messengers of horror to be found in these bloodstained pages of evil!

Just for the record, the pages in my copy are not actually bloodstained. Or evil.

It’s fun to play “match the story” with the over-the-top descriptions on the back. I figured THE MONSTER WORM had to be the loathsome star of Theodore Sturgeon novelette “It,” but more likely it’s David H. Keller’s “The Worm.” And THE BEETLE FROM HELL has gotta be Algernon Blackwood’s “An Egyptian Hornet.”

No idea what “THE LIVING CORPSE that commanded a graveyard” is. My first guess was Henry Kuttner’s famous Weird Tales debut The Graveyard Rats… but when I double-checked the Table of Contents, I discovered that story isn’t even in the collection! So much for my memory.

I find it odd that “Legal Rites” was credited solely to Asimov (it was co-written with Frederik Pohl.) Sure, Asimov was a bigger name in SF in 1959, but Pohl had several very popular novels to his name by the end of the 50s, including The Space Merchants (1953), Search the Sky (1954) and Gladiator-at-Law (1955), all co-written with C. M. Kornbluth. By the time his Gateway novels appeared in the 70s and early 80s, his fame as an SF novelist was approaching Asimov’s, and personally I think he was a better fiction writer.

Nonetheless, the Table of Contents is packed with some of the most famous names in SF and horror. In addition to Asimov, Pohl, Sturgeon, and Blackwood there’s also Ray Bradbury, Roald Dahl, Charles Beaumont, Murray Leinster, H. L. Gold, David H. Keller, and Margaret St. Clair.

The anthology pulls from many of the top pulp magazines, including Amazing, Unknown, and Weird Tales — as well as The Saturday Evening Post, The New Yorker, and a handful of collections.

Br-r-r-! was published by Avon in 1959. It is 192 pages, originally priced at 35 cents in paperback. It has never been reprinted, and there is no digital edition. The cover is by Richard Powers.

I bought a copy on eBay in beautiful condition in November for $2.95. That’s sad. What’s wrong with you people, and why aren’t you buying vintage paperbacks?

I love these ’50s and ’60s era Avon paperbacks, with their lurid or trippily psychedelic covers by the likes of Powers! Any time I come across one in the old used-book bins, I generally snatch it up for the art and back-cover hyperbole alone, never mind that there are usually some fantastic stories by first-rate spec-fic authors inside! I’ll have to scour my bookshelf and see if I have any to share that haven’t been profiled yet here.

You and I are obviously cut from the same cloth. To me these old volumes are tiny little works of art… marvelous evidence that a wholly different era once existed. And on top of that, they often contain great stories and novels! I find them amazing.

And you’re absolutely right that Avon did a marvelous job packaging them, especially while Donald A. Wollhiem was editing.

> I’ll have to scour my bookshelf and see if I have any to share that haven’t been profiled yet here.

I hope you do! Someone of your gifts shouldn’t limit himself to horror, round-tables with Fred and Gabe, and classic comics of the 70s. 🙂

I used to buy those types of anthologies every time I saw one, but I’m not familiar with this one. Come to think of it, I don’t see many of them any more. Before the rise of some small publishers like Haffner, these types of anthologies were the only way to find stories by older authors outside of a handful of tales that were constantly reprinted.

Well put. Yes, there are plenty of wonderful anthologies and collections out there today for short story fans, virtually all of them in attractive permanent editions.

But what the genre has lost over the past 20 years is the inexpensive reprint anthology, the cheap book that served as an introduction to a host of new authors. The spare few anthologies still on the shelves tend to be original collections, like the monthly DAW anthologies or THE SOLARIS BOOK OF FANTASY.

You’re absolutely right. The field does need inexpensive reprint anthologies. While I’m a big fan of the anthologies Solaris publishes (DAW not as much), it was in the inexpensive anthologies that I became acquainted with the classic stories from the earlier decades. Whether they were the Del Rey Best of’s, the Asimov Presents the Great SF from DAW, the Conklin anthologies, or the Silverberg edited anthologies in the junior high library, those were the books that first fired my imagination (some would say warped my mind) and made be fall in love with the genre. Today the closest thing we have that’s inexpensive are some electronic only anthologies of sometimes dubious legality.

I have plenty of these old reprint anthologies, but not this one. It definitely looks worth seeking out. Really, there’s no better time to be living than during this era of “the death of print.” It truly seems like no one wants these beauties, and it makes it much easier for those of us who still do. My particular passion is the old Ace SF doubles and their other small format 40 cent editions. I’m often amazed at how inexpensive they are, but hey – more goodies for me!

> Whether they were the Del Rey Best of’s, the Asimov Presents the Great SF from DAW, the Conklin anthologies,
> or the Silverberg edited anthologies in the junior high library, those were the books that first fired my imagination

Wow, that’s a great list! And I shared all of them — especially Silverberg’s YA anthologies like MUTANTS and STRANGE GIFTS. And of course, THE SCIENCE FICTION HALL OF FAME, one of the great books of my youth.

In fact, I think you hit all the highlights, with the possible exception of a few of Asimov’s most important anthologies, like THE HUGO WINNERS and TOMORROW’S CHILDREN.

> It truly seems like no one wants these beauties, and it makes it much easier for those of us who still do. My particular passion
> is the old Ace SF doubles and their other small format 40 cent editions. I’m often amazed at how inexpensive they are, but hey – more goodies for me!

I think you’re absolutely right. I suspect what’s happening here is a generation is selling off its SF collections as they retire, die, or move into reduced living space. In a few years there won’t be nearly as many cheap SF collections online. So enjoy this time of relative plenty. I know I do… I’ve been steadily accumulating inexpensive paperback collections for the past five years.

And your right about the Ace Doubles too… they’re some of the most collectible books ever produced by the genre. They’re compact, beautiful, and just packed with great titles from fabulous names like Asimov, Silverberg, Wellman, Brunner, Van Vogt, Dick, and countless others.

People who want to share their explorations of Conklin’s anthologies some more might want to visit here:

That’s a great link… thanks for sharing!

And it reminds me that I need to pay a little more attention to Conklin’s anthologies in my Vintage Treasure columns.