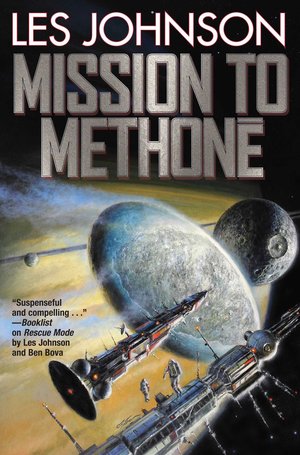 His first standalone novel is Mission to Methone, the tale of a vast and ancient galactic war, a derelict spaceship hiding in our solar system, and an artificial intelligence that has been concealing the existence of mankind. It appears humanity is not alone in the universe. Far across the galaxy, a war is raging between advanced alien races, and it’s about to be brought to our doorstep.

The year is 2065 and an accidental encounter in space leads to the discovery that we are not alone in the universe — and that our continued existence as a species may be in jeopardy.

Chris Holt, working in his office at the Space Resources Corporation, discovers that one of the asteroids he is surveying for mining is actually not an asteroid at all but a derelict spaceship. The word gets out and soon the world’s powers are competing to explore and claim for themselves the secrets that it holds.

What they don’t know is that across the galaxy, a war has been underway for millennia. A war between alien civilizations that have very different ideas about what should be done about emerging spacefaring civilizations like our own. The artificial intelligence resident in the derelict Holt discovered has been in our solar system since before the dawn of human civilization, watching, waiting and keeping quiet lest the interstellar war return and wipe out the sentient race that now resides there — humanity.

And that war might soon be again coming to our front door. The truth can only be discovered on Methone, a tiny, egg-shaped moon of the planet Saturn. Who will get there first? And will it be in time?

Mission to Methone will be published by Baen Books on February 6, 2018. It is 304 pages, priced at $16 in trade paperback. The cover is by Bob Eggleton. Read the first ten chapters at the Baen website.