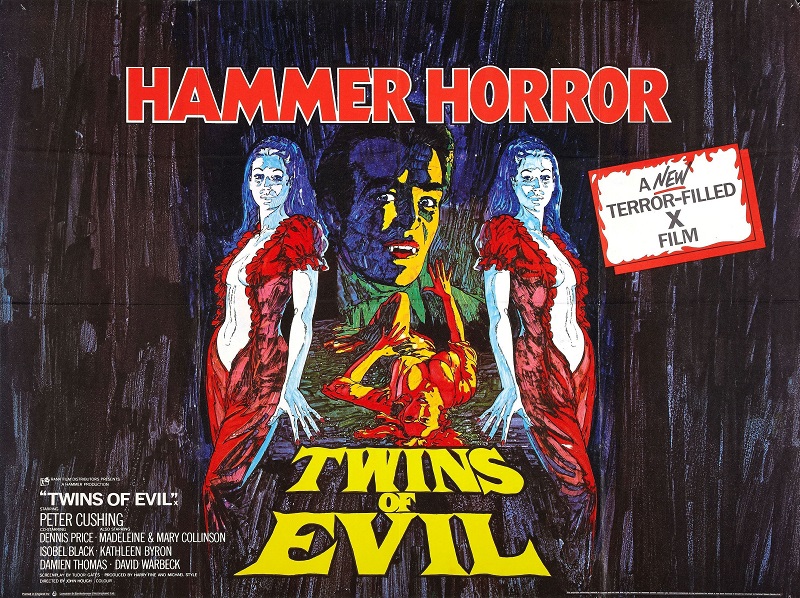 I loitered in the early ‘60s for my first two Hammer movies of October. Now it’s time to shift to a different era in the fortunes of the British studio that redefined Gothic cinema: the sexy, violent, and financially troubled early 1970s. Hammer Film Productions didn’t make it out of the decade, releasing their last film in 1978, but this period of independent producers and escalating R-rated material left behind some enjoyable decadence. Twins of Evil is late-period Hammer sexploitation with a basic high concept: sexy twin vampire girls! But the film ends up far better than the exploitation lure would lead you to expect. A good portion of this success has to do with Peter Cushing delivering a top-tier career performance as basically an aging, less tolerant Solomon Kane.

By 1970, the close-knit Hammer family was scattering. The in-house producers had left, so chairman James Carreras turned to outside producers. A small company called Fantale Films, consisting of producers Michael Fine and Harry Styles and writer Tudor Gates, brought Hammer a proposal to film Sheridan Le Fanu’s vampire novella “Carmilla.” This led to a loose trilogy of films about the Karnstein clan: The Vampire Lovers and Lust for a Vampire (both 1970) and Twins of Evil. Filled with nudity and overt lesbianism — at least in the first movie — the Karnstein series was a hit for Hammer at a time when the studio struggled to keep up with changing tastes in horror.

Twins of Evil is nebulously a prequel to the first two Karnstein films, showing how Count Karnstein (Damien Thomas) became one of the undead when he raised the vampire of sixteenth-century Countess Mircalla (Katya Wyeth) from her tomb. The heart of the story, however, is the Brotherhood: a band of puritan crusaders under the leadership of the fanatic Gustav Weil (Peter Cushing). The Brotherhood executes suspected witches and devil worshippers across Karnstein’s domains, although they cannot touch the count himself.

Karnstein places his lecherous blood-sucking attention on Weil’s two orphaned nieces who have come to live with him, Frieda and Maria Gellhorn (Madeleine and Mary Collinson respectively). One twin goes bad, one twin stays good, women are burnt at the stake, black-robed vampire slayers gallop horses through dark woods to an undead version of The Magnificent Seven theme, fountains of blood are shed, there’s a stunning decapitation, and Peter Cushing is awesome. It grows undisciplined at times with too many characters to fit together cleanly — a romance subplot with a young hero can’t effectively squeeze between the Brotherhood and the vampires — but Twins of Evil is the most exciting of the Karnstein trio. The pacing is excellent and the production values are superb for a ‘70s Hammer film. And have I mentioned that Peter Cushing is awesome? 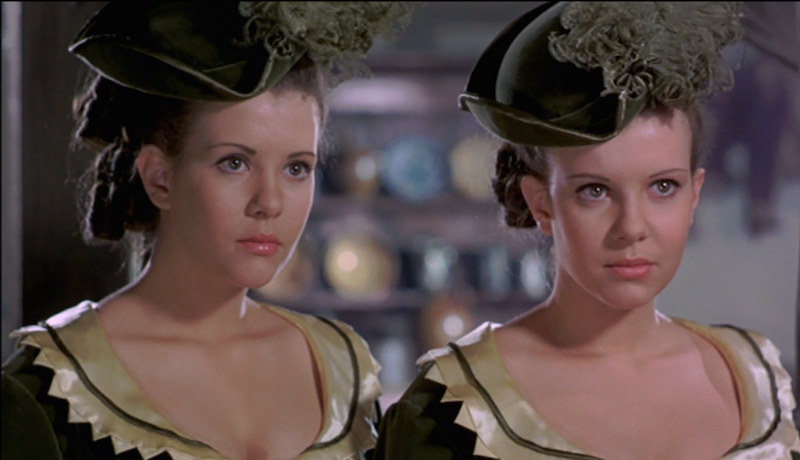 The Collinsons, identical twins from Malta, were the direct inspiration for the movie. After producer Harry Styles saw the Collinsons’ pictorial in the October 1970 issue of Playboy, he asked Tudor Gates to write a script about vampire twins. Gates wasn’t initially thrilled about the concept until he thought about finding a way to include Peter Cushing. Cushing was one of the stars of The Vampire Lovers, but his wife’s final illness kept him from appearing in Lust for a Vampire. Gates thought the film suffered because of Cushing’s absence (it did, although there’s plenty else wrong with Lust for a Vampire) and wanted the actor back. “How can I get Peter Cushing in with some twins? Once I’d got that, everything started to crystallise,” Gates recalled. “As far as I was concerned, this was a story about Peter Cushing’s character, and the twins to me were a coincidental, but necessary, part of the formula; the innocence to engage with the evil of the Count.”

I share Mr. Gates’s enthusiasm for the great Mr. Cushing. I know I’m getting repetitive, but I’m a Peter Cushing Superfan. Twins of Evil contains one of his quintessential screen performances because it shows the indefinable qualities he brought as an actor to parts that appear one-note on paper. Only a performer of Cushing’s caliber could execute a line that clumsily declaims the film’s title — “Satan has brought me twins of evil!” — without sounding like a ham.

But it’s the nuance Cushing brings to the role that’s most effective. Gustav Weil (pronounced “Vile”) is as much a murdering tyrant as Count Karnstein. His followers track down young women suspected of witchcraft and burn them, and the movie has no qualms about showing that most of these victims are innocent. Cushing plays Weil with the tightly wound, mesmerizing zeal you’d expect, taking his famous characterization of Van Helsing to the next level of hardcore authority. Yet he also makes Weil human enough that audiences can’t help but root for him. Weil’s scenes with his wife (wonderfully played by Kathleen Byron) show his sincere internal religious struggle. “I have tried — always — to be a good man,” Weil says after he’s discovered he was wrong about his suspicions that Maria has turned evil. Few actors could make this feel like an honest confession or convince audiences that Weil’s turmoil is genuine. Cushing absolutely kills it. 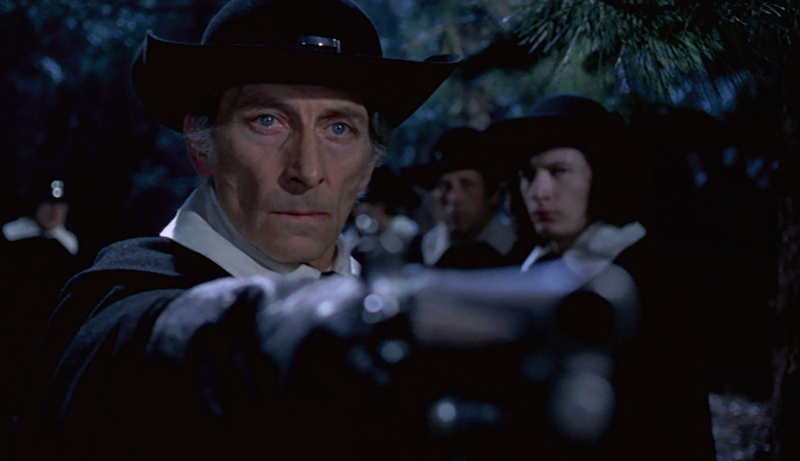 There’s an off-screen tragedy that affects Peter Cushing’s performance. This was his first role after the death of his wife, Helene, an event that devastated him almost to the point of suicide. Cushing appears gaunt and haunted; there’s a swell of darkness he puts into the part that must come from the actor’s own pain.

That Cushing can make Gustav Weil into a compelling, near-heroic character despite his, uhm, vile actions is part of the strange dichotomy of Twins of Evil, one common to many Hammer films and the horror genre in general. By using a good girl/bad girl set of twins and a protagonist who’s a religious zealot with innocent blood on his hands, Twins of Evil makes the sexual subtext into the text. Evil is equated with sexual liberality and is opposed by “good” that is intolerant puritanism emphasizing sexual modesty.

The movie presents a middle ground in the handsome young man, girl’s school choirmaster Anton (David Warbeck), who objects to Weil’s reign of terror and is the one who must slay Karnstein in the finale. But Anton is the least interesting part of the story. Audiences come to indulge in the extremes of Count Karnstein and vampire-Frieda against the stake-burning lunacy of Weil and the protection of virginal Maria. Even Anton is drawn to the allure of bad-girl Frieda over her gentle, obedient sister. When Anton sees the twins for the first time, a filter on the lens dulls out Maria and makes Frieda stand out. “Maria is very nice, much nicer than Frieda,” Anton tells his sister (Isobel Black), “but Frieda has a kind of fire inside of her. I can almost feel it burning when I’m near to her.”

The horror movie irony is that as the credits roll, Anton takes Maria into his arms, even though his passion is for Frieda. This feels wrong, but I think purposely so. With the rest of the cast dead and strewn all over the set, audiences are left with the sweet girl and blandly charming man who don’t have any real reason to be together except she’s an identical twin to a girl he liked. Viewers mull this over for a second, and then start talking about how great it was when Peter Cushing whacked off that vampire’s head. Horror movies have a pleasant way of reasserting priorities. 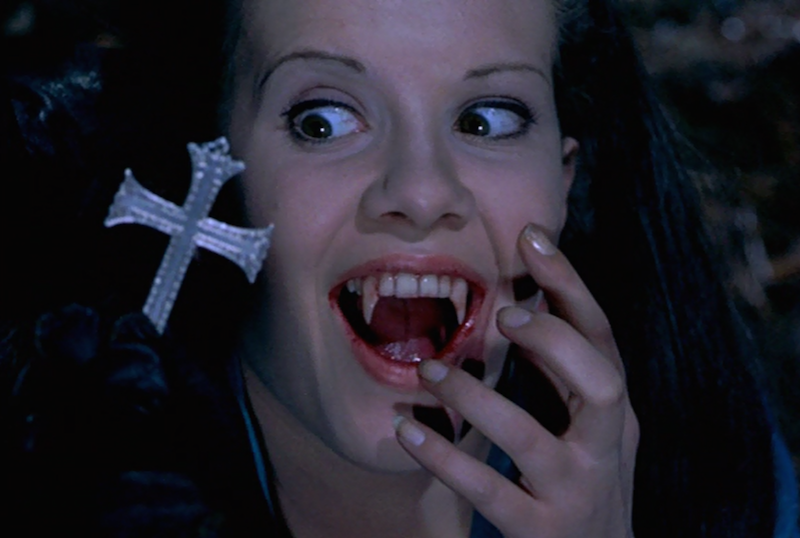 Just as Tudor Gates was more interested in Gustav Weil than the gimmick of twin vampire girls (actually, only Frieda becomes a vampire), director John Hough seems to have channeled his energy into the violent antics of the Brotherhood. Some of the most vivid moments are the sequences of these black-clad vampire hunters pounding through the woods on horseback. Composer Harry Robinson gave them a memorable theme with an intentional American Western sound; Robinson wanted to score a Western, and the horse-riding Brotherhood offered him the opportunity to get close to it. It’s incongruous to have such a rousing musical piece accompany witch-hunters running down an innocent girl so they can roast her alive, but that’s Twins of Evil and early ‘70s Hammer for you.

Madeleine and Mary Collinson may have been cast as a sexploitation stunt, but both turn in solid performances. They’d never starred in a feature film, but had made a few screen appearances before, mostly in short stag films, and show no self-consciousness about the camera. They’re aided by dubbing from professional actresses (the sisters spoke very little English) and sumptuous costumes that are the height of eighteenth-century glamor. Although the camera and costumes play up the Collinsons’ looks, the movie is surprisingly restrained when it comes to on-screen nudity, especially compared to the other Karnstein films.

The Collinsons are best when sparring over Frieda’s turn to the dark side; a natural sororal chemistry emerges when they’re put together. According to Hough, this chemistry was a reflection of the Collinsons’ real-life personalities: Madeleine was the party girl while Mary was more withdrawn. Whether or not they were intentionally cast with their natural personas in mind (they probably were) the difference in characterization has a strong impact, with Mary always looking sweetly confused and alarmed while Madeleine revels in her diablerie. Madeleine really loves her fangs, and she cuts loose when she tries to seduce/kill Anton. The script contains a number of small flourishes to separate the sisters long before those fangs come out: when uncle Gustav demands his nieces remember the fourth commandment, it’s Frieda who immediately replies with nonchalance, “Which one is that?” Nice touch.

Twins of Evil doesn’t do anything radically different from the standard vampire story Hammer glommed onto with Dracula in 1958. There’s more sex and gore, a stronger puritanical angle, and the visuals have expanded to include more outdoor photography; but it’s familiar vampire territory, particularly Count Karnstein as another blood-sucking aristocrat. But conventional Gothic vampire entertainment is still some of the best times you can have in October, and who would dare to refuse Peter Cushing? The only 1970s Hammer film I enjoy more is Hands of the Ripper, which was released on a bill with Twins of Evil, making it Hammer’s last great double feature.

Finally, if you’re a Robert E. Howard fan — I know at least a few frequent this site — Peter Cushing’s Gustav Weil is the closest thing you’ll probably ever have to seeing the real Solomon Kane on film.

Twins of Evil is currently available in North America on a Blu-ray/DVD set from Synapse. The Blu-ray contains an extensive documentary on the film and the others in the Karnstein Trilogy. 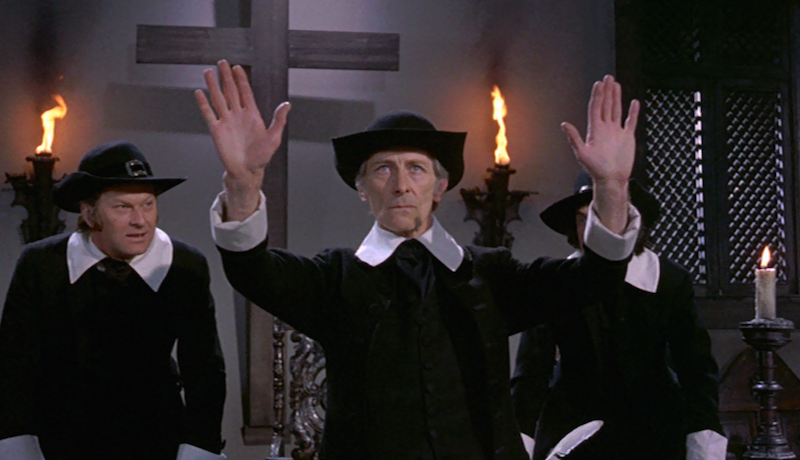 “Before your execution, I’d like you to join me for a ceremony that will make this Brotherhood operational.”

Hmmm … Had never pictured Peter Cushing as Solomon Kane before, but now I think I can see it …