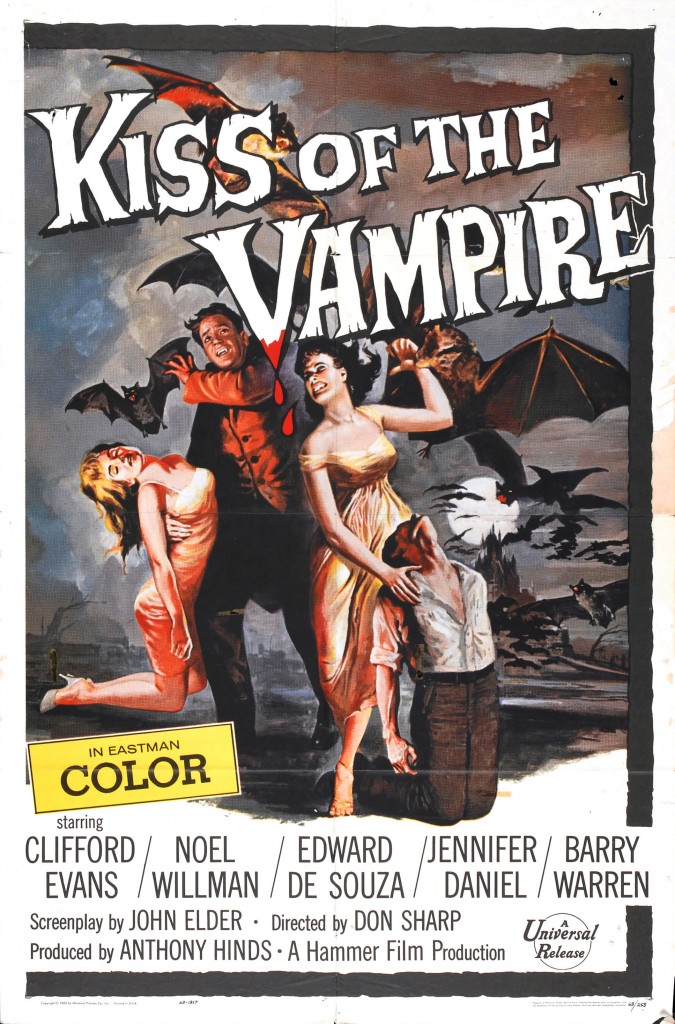 October is here and that means I need no excuse simply to line up a quartet of horror movies from Britain’s Hammer Film Productions for the next four Saturdays in a row and throw words at them. For me, Hammer films are the perfect horrors for the Halloween season: atmospheric, Gothic, supernatural featuring famous monsters, violent without making you feel abysmal afterward, and packed with plenty of Christopher Lee and Peter Cushing. Hammer movies feel like great Halloween party guests who wear the most elegant costumes and whom you want to hang out with after the other guests have gone home.

My criteria for picking the four movies for a Hammer October was to choose films from outside of the studio’s two major franchises — Dracula and Frankenstein — and which are currently available on Blu-ray in North America. Which means Plague of the Zombies and The Devil Rides Out are disqualified, unfortunately. (Kino Lorber, please get on this.) But it was easy to find movies that fit my ghoulish bill, and I’m starting off with the first vampire film Hammer produced that didn’t involve Dracula.

The Kiss of the Vampire was originally intended as a follow-up to The Brides of Dracula (1960), the first sequel to Hammer’s smash 1958 hit Dracula/Horror of Dracula. Hammer was trying to create a Dracula series without the count and Christopher Lee, focusing instead on Dracula’s legacy of aristocratic blood-sucking descendants and Peter Cushing’s Van Helsing pursuing them. The Kiss of the Vampire was going to continue this, introducing a full coven of vampires holding black magic ceremonies in a Gothic castle. This expanded on hints from The Brides of Dracula: the opening narration speaking of how Dracula’s “disciples live on to spread the cult and corrupt the world,” and the story of the wealthy visitors to Castle Meinster who seduced the young baron into their undead circle.

But during the screenwriting of The Kiss of the Vampire, producer/writer Anthony Hinds (credited under the pseudonym “John Elder” for the screenplay) removed all references to Dracula and Van Helsing, creating a standalone vampire tale. It’s still easy to imagine Dracula as the godfather vampire who created the cult under the leadership of Doctor Ravna (Noel Willman) and his children, and at some stage the inebriated Professor Zimmer (Clifford Evans) could’ve been a more active vampire-slaying Van Helsing. Kiss of the Vampire comfortably exists in the same European Gothic fantasy world as the two earlier Dracula films, even with a new director behind the camera.

The Kiss of the Vampire is the first of Hammer’s mainstream gothic horrors not directed by Terence Fisher. Anthony Hinds hired director Don Sharp, who had never handled a horror film before. According to Sharp, he’d never even seen one until Hinds sat him down to show him the company’s recent output. Sharp took to the genre fast. “I thought it was wonderful,” he later recalled. “Here was a genre with its own ground rules and self-contained world, and you could be theatrical but treat it realistically to grab the audience and make them believe something absurd.” Hinds and Sharp enjoyed working together, and Sharp directed two more notable movies for Hammer, both starring Christopher Lee: The Devil-Ship Pirates (1964) and a subject I’ve visited before, Rasputin the Mad Monk (1966).

The Kiss of the Vampire has a stunner of an opening that’s a perfect Hammer shock moment. It shows Don Sharp learned important lessons from how Terence Fisher staged scenes to deliver genuine jolts. In a German town in the early 1900s, a funeral party in a churchyard lowers a coffin into the ground as a priest reads a benediction and sprinkles holy water. Then a man approaches the black-garbed party, someone apparently connected to the deceased. He makes a wordless request to be the one who shovels the first pile of loam onto the coffin. He takes the shovel in hand, and after a breath, drives it straight down into the coffin. A woman screams from inside, blood flows from the splintered coffin lid. The funeral party scatters, and a dissolve through the wood of the coffin shows the fanged girl now lying staked inside. Cue opening credits. 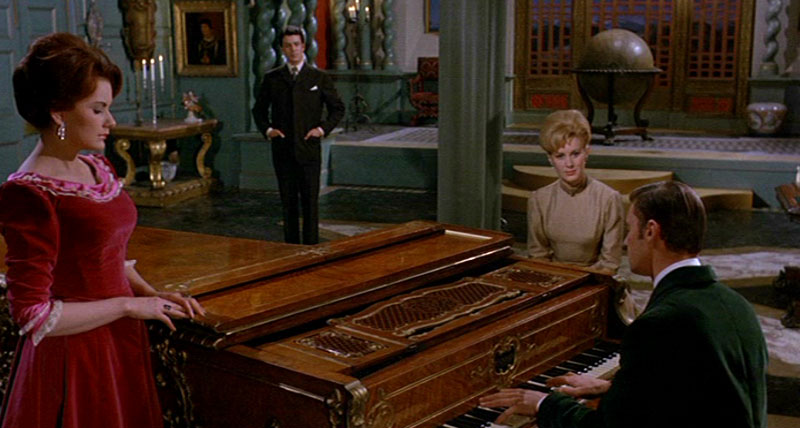 The audience doesn’t discover until later that the shovel-staker is Professor Zimmer, the film’s drunken, somewhat hapless Van Helsing figure, and the girl in the coffin was his daughter. Before returning to Professor Zimmer, the movie introduces honeymooning couple Gerald and Marianne Harcourt (Edward De Souza and Jennifer Daniel) puttering in their motor car through the Germanic fantasia of a typical Hammer movie. But … wait for it … the motor car runs out of gas! They’ll have to stay the night at a mysteriously vacant inn under the watchful eye of the Castle of the Ravna family. Doctor Ravna invites the Harcourts up to the castle and the rest of the story kicks in. You could probably write it from this point.

It’s here that the film starts to slow down and take its time. Don Sharp imitates much of Terence Fisher’s style, receiving help from the experienced production team (once again, production designer Bernard Robinson and art director Don Mingaye do a superb job with detailed sets and props), but the pacing of major events is slower. It’s better to view the film as atmospheric rather than frightening, a chance to enjoy the special world of the Hammer Gothic and the sumptuous costumes and sets. There’s a masked ball at Castle Ravna, where the innocent couple finds themselves among a gathering of vampires from across Europe, that contains enough of the scent of decadence (for 1963) to fire up the imagination.

What restrains the film most during the lengthy middle span is Professor Zimmer, or more specifically the lack of Professor Zimmer. The vampire slayer in a movie like this serves the key role of moving along the innocent characters and taking early action against the vampires. But Zimmer wiles away the time drunk at the inn and occasionally snarls unhelpfully at people. He clumsily lets one of the vampires bite his wrist (to which he applies the same cure for vampirism Van Helsing used in The Brides of Dracula). He finally shifts into action when Gerald Harcourt comes to him for help after the vampire coven kidnaps Marianne. Zimmer provides the help, but only from a distance: he turns evil against evil with a black magic spell to counter the magic of the gathered undead coven.

Although it’s annoying this climax unfolds away from both the vampire hunter and the young hero, it’s still a helluva climax. This ending was originally intended for The Brides of Dracula, but was dropped because Peter Cushing objected to Van Helsing resorting to the use of black magic. Cushing was right about this; but the scene concept was too good to abandon, so it ended up here with a vampire hunter with fewer scruples. Professor Zimmer’s spell summons a cloud of demon vampire bats who surround the tower of Castle Ravna and smash through the stained glass windows to assault the gathered vampire coven, killing them all. The special effects are crude by modern standards — bats on wires, some limited animation — but effects supervisor Les Bowie and assistant Kit West were clever at getting around these problems and keeping the audience’s attention on the shock of watching vampire bats swarm the necks of the Ravna family and their followers. It’s grotesque to watch, like something out of The Birds, and makes the whole film retroactively worth it. (Allegedly, Universal delayed the premiere of The Kiss of the Vampire in the U.S. because of the similarity between its climax and sequences in The Birds, which Universal released in March.) 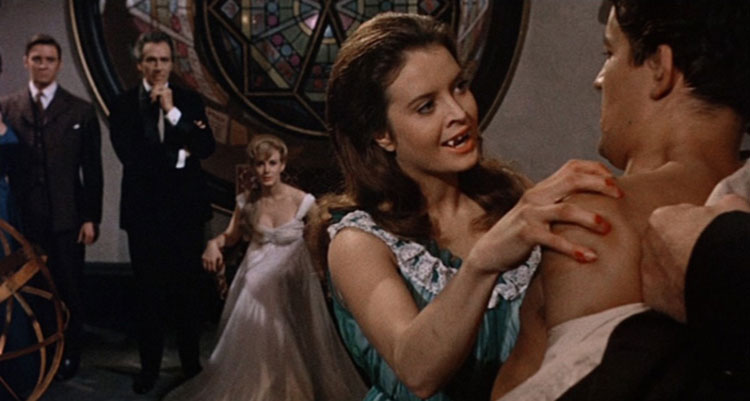 The most elegant scene, and the best moment outside the stunning opening and climax, has Doctor Ravna’s handsome son Carl (Barry Warren) performing one of his own piano compositions to hypnotize Marianne. The power behind the sequence is the original piano piece by composer James Bernard, which he titled “Vampire Rhapsody” and took inspiration from Liszt. Like the form of the rhapsody — multi-part but integrated — the “Vampire Rhapsody” ties together the entire score as Bernard uses it as the thematic center of the rest of the music. It’s a magnificent and appropriate piece: violent, dark, sensual.

The cast has only a few familiar Hammer faces, since Don Sharp cast performers with stage backgrounds. Clifford Evans is the only one with a major Hammer horror credit; he was top-billed as Don Corledo in The Curse of the Werewolf. Vera Cook, who plays the wife of the innkeeper, also played the wife of an innkeeper in The Brides of Dracula. The cast members acquit themselves well, befitting stage professionals, but there’s no big performance that bursts through. Hammer films don’t always need a Cushing or a Lee in the cast, but they do need a bit more florid acting flourishes. Evans’s vampire hunter is too reduced in importance, and Noel Willman as Doctor Ravna is definitely Dracula-lite. Among the various vampires around Doctor Ravna, only Isobel Black as Tania, the vampirized daughter of the innkeeper, seems to relish the outrageous aspects of the production. Black enjoys her “sexy vampiress” part, which stands out because the sensuality of the two earlier Dracula movies is toned down elsewhere.

The Kiss of the Vampire isn’t peak Hammer, but it comes from the studio’s most vibrant period and is superior to the majority of the Dracula sequels. The Hammer style was able to survive away from Fisher’s direction, which helped the studio branch out and experiment in the future. It also provides good decorating tips for your next vampire masquerade-themed Halloween party. Make sure you have lots of bats on wires hanging from the ceiling. Lots and lots of bats.

The Kiss of the Vampire is currently available in North America on Blu-ray as part of Universal’s Hammer Horror 8-Film Collection. As is standard for Universal’s catalog titles, the picture quality is adequate but at least a marked improvement from Universal’s previous DVD.