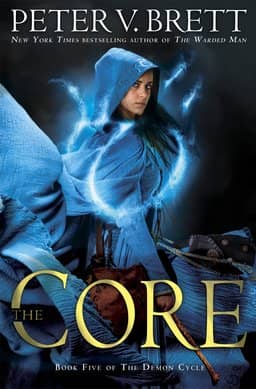 The second book in Peter Brett’s Demon Cycle series, The Desert Spear, became an international bestseller, and the next two volumes catapulted him to the top tier in the industry. That’s a meteoric rise for someone with a single series to their name.

Anticipation for the final book, The Core, has been running high for two years, and it finally arrived  in hardcover from Del Rey this week. Here’s the description.

For time out of mind, bloodthirsty demons have stalked the night, culling the human race to scattered remnants dependent on half-forgotten magics to protect them. Then two heroes arose — men as close as brothers, yet divided by bitter betrayal. Arlen Bales became known as the Warded Man, tattooed head to toe with powerful magic symbols that enable him to fight demons in hand-to-hand combat — and emerge victorious. Jardir, armed with magically warded weapons, called himself the Deliverer, a figure prophesied to unite humanity and lead them to triumph in Sharak Ka — the final war against demonkind.

But in their efforts to bring the war to the demons, Arlen and Jardir have set something in motion that may prove the end of everything they hold dear — a swarm. Now the war is at hand, and humanity cannot hope to win it unless Arlen and Jardir, with the help of Arlen’s wife, Renna, can bend a captured demon prince to their will and force the devious creature to lead them to the Core, where the Mother of Demons breeds an inexhaustible army.

Trusting their closest confidantes, Leesha, Inevera, Ragen, and Elissa, to rally the fractious people of the Free Cities and lead them against the swarm, Arlen, Renna, and Jardir set out on a desperate quest into the darkest depths of evil — from which none of them expects to return alive.

At 800 pages, The Core brings the page count for the entire 5-volume series to an impressive 3,250 pages. This is an epic you can sink your teeth into, and no mistake. It began with The Warded Man, still available in paperback. Those of you looking for a new fantasy series, and who hate to start reading before it’s complete — your ship has finally come in.

Peter Brett talked to Shawn Speakman about the upcoming release at Unbound Worlds.

After years of watching authors like Robert Jordan and George RR Martin illustrate the potential quagmires of epic fantasy, I was determined to avoid them, but it’s one of those things you don’t really appreciate until you’re in the middle of it.

Creating a slew of fascinating POV characters is joyful and exciting in the beginning, but as each of them finds their own path, it gets increasingly difficult to herd them back together for a satisfying conclusion to individual books, much less the series as a whole. Each book gets heavier as characters accumulate emotional and dramatic baggage, and you find yourself needing to keep notes of who slept with who and who killed whose father, and all that history gets in the way of tight storytelling.

That said, after two years of work, I feel that I’ve brought the series to a really satisfying end, with closure of all the major and minor story arcs, as well as cameos at the least for anyone who has ever been anyone in the series. No matter who your favorite character is, they have a chance to shine in The Core, even if they don’t all make it to the end…

There will eventually be a new series taking place 15(ish) years after The Core, using a new cast of main characters with some favorites from the older series reappearing as supporting characters. It will feature Leesha’s daughter Olive, and as readers will discover when they read The Core, Olive is something really special.