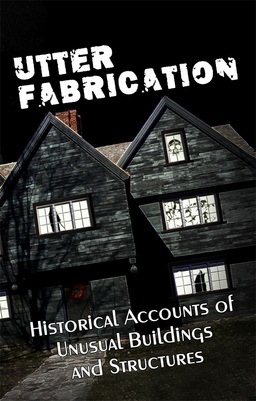 “No one understands strange places like the people who have been there,” opens the description for Utter Fabrications: Historical Accounts of Unusual Buildings and Structures, calling out the fact that everyone knows a place that gives them a funny feeling. For me, it was a stretch of residential street partway between the grocery store where I worked as a teenager and the home where my mom and stepdad lived. Walking that way wouldn’t always make my skin crawl… but enough that I started to avoid it.

The idea behind this anthology, I think, is to evoke that familiar feeling of the uncanny. And some of the stories in Utter Fabrications manage to do that. “Every House, A Home” by Evan Dicken focuses on a freelancer who tries to suss out the negative energy around buildings – not because of bad feng shui or poltergeists, but because the building is actually unhappy. In “Kingsport Asylum” by Diana Hauer, a woman returns to the asylum where she spent her youth and faces the very tangible memories of the crimes committed there.

Each story takes the idea of a place being inhabited by energies beyond our understanding and plays with it, and one of the strengths of this anthology is the different ways this idea is shaped, whether it’s through a roving bike rack, a house that dreams of exotic locales or a city district that sometimes takes people but also sometimes protects them. There are also a number of diverse characters on display; my favorite was the non-binary groundskeeper in “Asylum,” with a close second being Nat in “Every House,” who struggles with reading human emotions but can become totally in tune with a building.

If I’m being entirely honest, though, none of the stories really drew me in or gave me that “aha” moment I look for in short fiction. In some cases the stories are predictable, and in many cases things work out well in almost prosaic or Lifetime movie sort of way, which has never been my cup of tea. The roving bike rack that becomes attached to Alanna McFall’s protagonist in “Can’t Be Locked Down” is the one story that struck me with its quirky originality, but none of the others really did the same.

And though the anthology is described as a collection of “historical accounts” recorded from fictional characters, the inclusion of stories like “Sector 5” by E.R. Zhang (set on a far-flung planet abandoned by its alien inhabitants) and “The High Cost of Answers” by Michael M. Jones (urban fantasy set in a fictional town) breaks the cohesiveness of an anthology that would otherwise have been based solely in our world, acknowledging that maybe there are things going on behind the scenes that we don’t always detect. So while Utter Fabrications tries to acknowledge that funny feeling we all sometimes get, it misses the mark in terms of leaving us with a similar lasting feeling.

That said, there are some really enjoyable stories in here, and I’d specifically recommend checking out Alanna McFall and Micheal M. Jones.