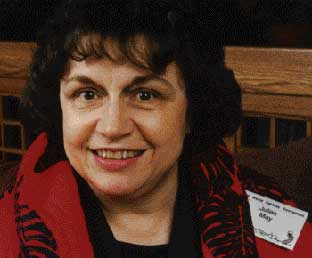 Julian May, fan and bestselling science fiction writer, died this week at her home in Bellevue, Washington.

Julian May was active in US fandom in the 40s and early 50. She published her first story, “Dune Roller,” in the December 1951 Astounding; it was filmed as The Cremators in 1972. She was the first woman to chair a Worldcon, with the Tenth World Science Fiction Convention in Chicago in 1952. The next year she married T.E. Dikty, co-editor (with Everett F. Bleiler) of The Best Science Fiction Stories, the first Year’s Best SF anthology. Over the next few decades she wrote 250 books, chiefly non-fiction books for young readers and adults, including A Gazeteer of the Hyborian World of Conan (1977, under the name Lee N Falconer).

In 1976 May began attending SF conventions again, starting with Westercon 29 in Los Angeles. She wore an elaborate diamond-encrusted space suit to the costume party, and started sketching ideas for who might actually wear such a suit. In 1978 she began writing what became the Saga of Pliocene Exile, the tale of a group of refugees from the twenty-second century who flee six million years into Earth’s past, only to discover two alien species in deadly conflict with humans who’ve already arrived.

May demonstrated an immediate talent for ambitious SF series, and turned that 4-volume saga into essentially into an extensive prelude for Galactic Milieu sequence: Intervention (1987) Jack the Bodiless (1992), Diamond Mask (1994) and Magnificat (1996). Her other work includes three trilogies: Trillium (written with Andre Norton and Marion Zimmer Bradley, published 1990-97), The Rampart Worlds (1998-2001), and Boreal Moon (2003-06). The Science Fiction Encyclopedia calls her work “at times reminiscent of the Planetary-Romance Baroque of Roger Zelazny.”

May was inducted into the First Fandom Hall of Fame at the 73rd World Science Fiction Convention in 2015. She died on October 17, 2017. She was 86 years old.

Was saddened by the news, although I hadn’t read her since probably high school or so (the Pliocene Exile books).

I loved, loved the Pliocene Exile books, and followed them up with all the Galactic Milieu books. And I remember being super surprised to learn that Ms. May’s only previous sf publication was the short story “Dune Roller”. Which I recalled reading from one of the Alfred Hitchcock collections, Stories Not for the Nervous.

Baird Searles, who reviewed books for Asimov’s and managed The Science Fiction Shop in Manhattan, once said that the 2 best sf series of the 1980s were Gene Wolfe’s Book of the New Sun and Ms. May’s Pliocene Exile. But only the Pliocene Exile moved him emotionally as well as intellectually. I would agree.

So sad. Her Pliocene books were some of the best SF of the last 40yrs, IMO. She lived a full life and enjoyed herself, from what I gather. Requiescat in pace, Julian.