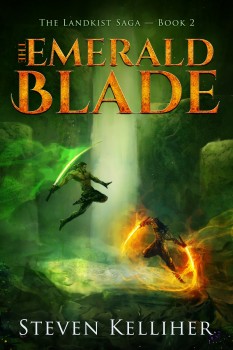 I may miss the next month or so, due to the Mysterion Kickstarter and a workshop I’m attending, but please keep sending me books to review, and I’ll get to them soon — see the instructions here.

Steven Kelliher’s The Emerald Blade is a sequel to his novel The Valley of Embers, which I reviewed at Black Gate last year. It follows the fire-wielding Ember Kole, and Linn, who inherited the air-wielding abilities of the White Crest. After defeating the White Crest, they set out to pursue T’alon Rane, the corrupted King of the Embers, whom they hope will lead them to the Eastern Dark, the Sage who is bringing the Dark Kind of the World Apart to their world.

They are joined by two fellow Embers, Misha and Jenk, and the massively strong Rockbled Baas. Both Embers and Rockbled are Landkist, gifted power by the lands in which they live, as opposed to the Sages, who take power from the land. Kole’s and Linn’s expedition travels to the Emerald Road, a rainforest where massive trees form multiple layers of canopy atop one another, and traveling along the Road involves moving from layer to layer. There they discover that the Sage Balon Rael has come to the Emerald Road, seeking the Emerald Blade, the name for both a man and the weapon he wields, a weapon that’s all that remains of the Emerald Sage.

T’alon Rane seeks both the Emerald Blade and the death of Balon Rael, on the orders of the Eastern Dark, but to achieve his goals, he temporarily allies himself with Balon Rael while looking for an opportunity to betray him. Meanwhile, Kole and Linn and their group ally themselves with the Emerald Blade. Similar to the first book, shifting alliances and tenuous loyalties make the action unpredictable, as the sides realign constantly right up to the end.

This book shows some significant improvement over the first one in a technical sense, as it is less burdened by the copy-editing errors of the previous book. There are still some prose issues, and a few scenes where the action is hard to follow. There are also a few annoying tics, such as referring to eyes by their colors–not entirely unjustified, as they sometimes change when Landkist use their powers–and regularly using “blade” as a verb.

The biggest issue with this book is that it takes a long time to get going, with the beginning focused on what’s happening in the Valley as the characters recuperate from the events of the first book and prepare for their journey. There are actually two expeditions, the first one heading to the Emerald Road, and the second to the ancestral desert of the Embers, led by Captain Talmir and joined by Linn’s sister Iyana. But while viewpoints freely switch between members of both expeditions at the beginning, once they go their separate ways, we only see what happens to Kole’s and Linn’s team, with only a vague reference at the end to what the other expedition might have been up to. Presumably, Kelliher intends to tell that story in a separate book, but this one might have benefited by sticking to one expedition’s point of view, so that the sudden vanishing of the other wasn’t quite as disorienting. I suspect that he originally intended to cover both, but the book became too long–and it is long–so he ended up separating out that part for another book. If so, The Emerald Blade would have benefited from some editing to make the first part more focused on the story he did tell.

The Emerald Road introduces two new types of Landkist, Raiths and Whispers. Raiths have the ability to dominate animals and force them to fight for them, while the all-female Whispers have Sight that pierces through the thick forest of the Emerald Road. This departure from the elemental theme of the first book adds some variety to the magic system, though it’s not entirely unprecedented. The Raith Brega appeared briefly in the first book, and his uneasy alliance with Rane and hatred of the Emerald Blade provides a great deal of the tension on Rane’s team.

The story switches back and forth between Kole’s team and Rane’s, and makes the villains a great deal more sympathetic than the faceless Dark Kind of The Valley of Embers. I was personally conflicted about the war between Brega and the Emerald Blade, as I think that Brega is given more depth and motivation as a character, even as he rushes headlong into a disastrous and needless war. I applaud Kelliher for making sympathetic villains who nevertheless must be defeated.