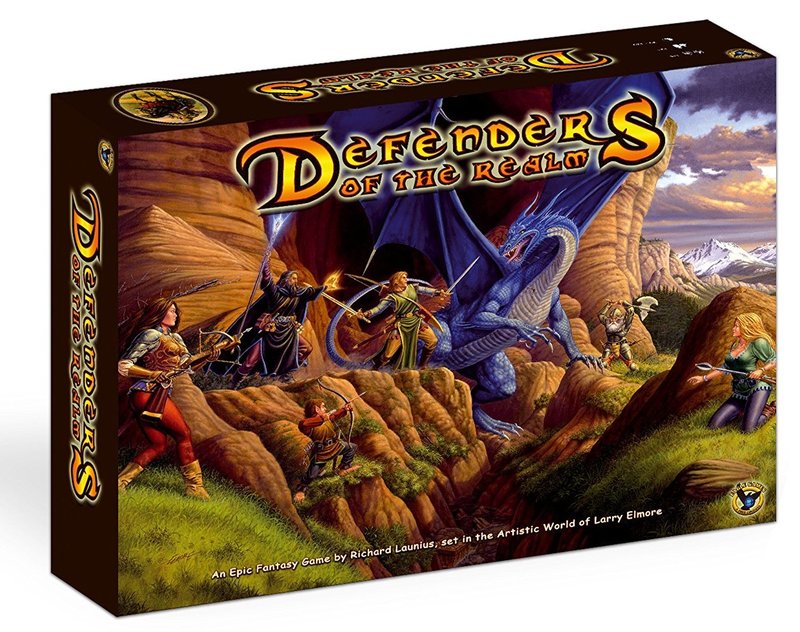 Stop me if you’ve heard this one. A dragon, a demon, and an undead walk into a kingdom. Oh, and an orc. Mustn’t forget the orc. These four generals are leading their hordes of minions in a march on Monarch City, and it’s up to the players to stop them. This is the cooperative board game Defenders of the Realm, designed by Richard Launius and published by Eagle Games.

The players have no army of their own to oppose the invaders. Instead they have one to four heroes of the sort you’d expect: paladin, ranger, wizard, sorceress, rogue, etc. The bad guys have several ways to win. The players have one: defeat all the generals, no matter how many of their minions remain on the board.

The mechanics of Defenders bear more than a passing resemblance to the board game Pandemic, but this isn’t a reskinned knock-off, as the fantasy theme is strongly integrated into the game. Miniatures add to the theme, with a unique plastic mini for each hero and general, and hordes of color-coded minions. (Sapphire, the dragon general, has the place of pride in the game, standing nearly two inches tall. However, the amorphous cloaked minions are my favorite.) 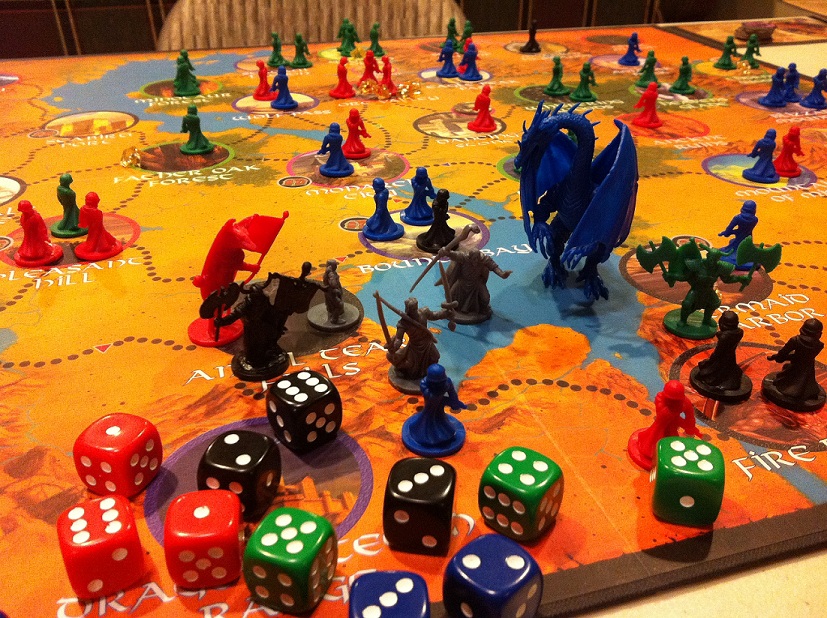 On a player’s turn they spend action points to do things like move, attack minions, go on quests, and heal the land. An attack involves rolling color-coded dice, one for each minion in the fight. A five or a six is needed to take out a dragonkin, but a three or higher will kill an orc. In true heroic style, a battle against multiple minions makes for a target-rich environment, while attacking a loner might not be worth the action point.

If a hero ends a turn in a location with minions, each one wounds the hero unless they’re saved by one of their special abilities. For example, the dwarf is armored and tough, so he ignores one wound per turn.

At the end of a player’s turn they draw two Hero Cards. The Hero Card deck is half the engine driving the game. The cards are usually color-coded, providing the means of attacking one of the generals, but they can also be spent to travel faster or to fuel some of the unique hero abilities. This leads to some interesting decisions. “Do I spend this card to have an eagle fly me four spaces so I can deal with the minion problem in Raven Forest, or do I save the card for the two dice it gives me against the demon Balazarg?”

Some of the Hero Cards are specials, also known as butt-savers. They can bring up tougher decisions. “Do I play my Cavalry Sweep card to immediately defeat six minions across three adjacent locations, or do I save it for the attack die it gives me against any general?” 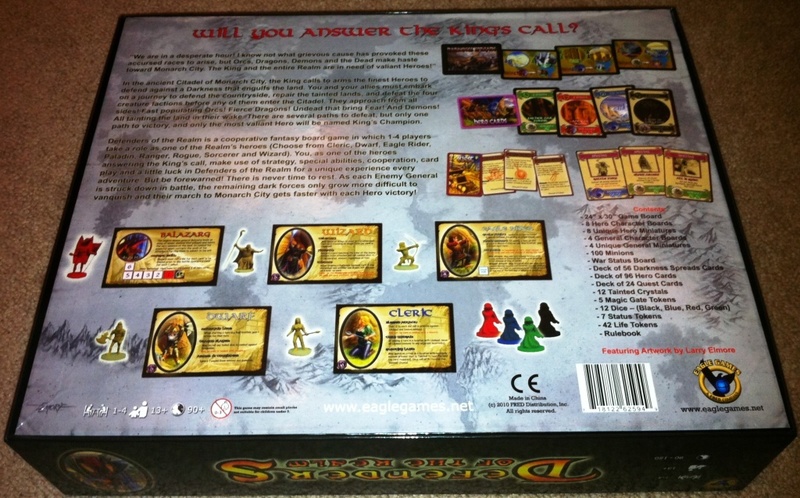 Once a player has completed their turn and collected Hero Cards, the other half of the game engine kicks in. That’s the Darkness Spreads deck. It moves the generals along their paths to Monarch City and brings minions onto the board. If too many minions are spawned in one location, the land there is tainted and overrun; a taint crystal is placed in that location and a minion is spawned in each adjacent location.

The Darkness Spreads deck is where the game gets its replayability. The players have to balance keeping the minion count down and keeping the land healed and killing generals that are getting too close to Monarch City, but they are always reacting to how Darkness Spreads plays out.

As I said, the only way for the heroes to win is to defeat all four generals. But losing, let me count the ways…

Which brings us to how generals are defeated. Here players must rely on that tried and true battle tactic, the dog pile. The players pick a target and, in turn, move to that general’s location. When they think they have enough attack dice among them to take out the general, the last one to arrive triggers the combat. If the players win, huzzah! One less general! 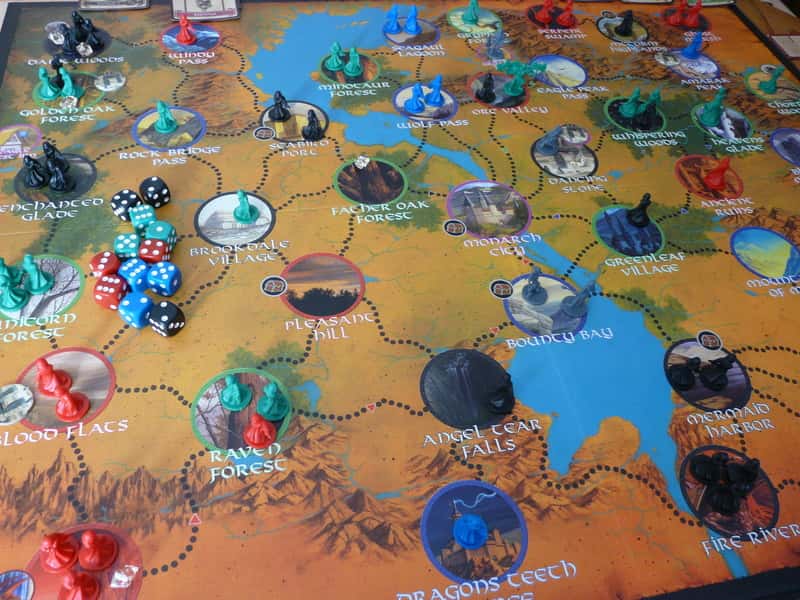 Except the fewer generals on the board, the more Darkness Spread cards are drawn at the end of a players turn. Darkness spreads further, generals move faster.

Oh, that orc general, Gorgutt? We find him to be the hardest to kill, even though he’s the easiest to hit. Heroes aren’t the only one with special abilities.

This is a tough game. I’ve played about twenty games and won four or five. A huge cheer goes up when the tension is high and that last general falls. However, my big disappointment with the game is that the losing often feels anti-climactic. A Darkness Spreads card is flipped and…

“We lose.”
“No! Really?”
“Does anyone have a special that keeps minions from coming out or kills at least two green ones?”

This triggers everyone double-checking their specials. If someone has one, the players have dodged a fatal blow. If not, start packing up the game. The emotional impact of a loss doesn’t feel comparable to that of most wins.

My other disappointment is that the rules are poorly written. The online FAQ is a must, but even that can be ambiguous.

Despite those disappointments, my wife and I have had a lot of fun playing this, each with two heroes, and the one four-player game we were in was a blast. I expect this will remain in our collection for a long time.

Co-ops never work well with my group so i skipped this when it came out. But i love that awesome Larry Elmore art.

Heh. I’m not a big fan of Elmore. Most of his work feels static to me. Too much Frazetta in my blood. 😉

Howdy Jeff. Went back and saw your BattleLore post. What do you think of Runebound?

Hey, Bob. I talked about Runebound 2nd ed. here several years ago. It’s a game we still enjoy but play maybe once a year due to our limited gaming time.

Clank! is what currently makes it to our table most often, bumping Defenders of the Realm by right of being the most recent acquisition. However, we just backed Gloomhaven on Kickstarter, and that might take us years to get through at our usual frequency of gaming.