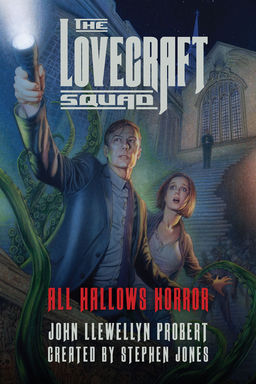 Editor Stephen Jones is a busy guy, with over 140 books to his credit, and no less than four World Fantasy Awards and twenty-one British Fantasy Awards under his belt. His latest project is an interesting one — he’s the creator of The Lovecraft Squad. a series of novels that follow a secret organization dedicated to stopping the dark horrors accurately described in H.P. Lovercraft’s fiction. The first volume, All Hallows Horror, by novelist John Llewellyn Probert, was published in hardcover by Pegasus last month.

There has always been something wrong about All Hallows Church. Not just the building, but the very land upon it stands. Reports dating back to Roman times reveal that it has always been a bad place — blighted by strange sightings, unusual phenomena, and unexplained disappearances. So in the 1990s, a team of para-psychiatrists is sent in to investigate the various mysteries surrounding the Church and its unsavory legends. From the start, they begin to discover a paranormal world that defies belief. But as they dig deeper, not only do they uncover some of the secrets behind the ancient edifice designed by “Zombie King” Thomas Moreby but, hidden away beneath everything else, something so ancient and so terrifying that it is using the architect himself as a conduit to unimaginable evil.

After four days and nights, not everybody survives — and those that do will come to wish they hadn’t. Imagine The Haunting of Hill House, The Amityville Horror, The Entity and The Stone Tape rolled together into the very fabric of a single building. And then imagine if all that horror is accidentally released…

John Llewellyn Probert’s previous work includes the novels The House That Death Built and Unnatural Acts and the collection, The Faculty of Terror. He won the British Fantasy Award for his novella The Nine Deaths of Dr Valentine.

The next volume of The Lovecraft Squad, titled Waiting, will be released in hardcover on October 3, 2017.

The Lovecraft Squad: All Hallows Horror was published by Pegasus Books on March 7, 2017. It is 377 pages, priced at $25.95 in hardcover and $9.99 for the digital edition. The cover is by Douglas Klauba.