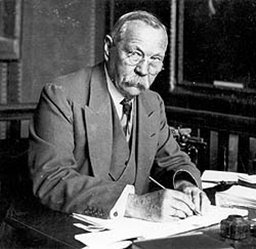 In December of 1893, Sir Arthur Conan Doyle rather unceremoniously tossed Sherlock Holmes off of a ledge at the Reichenbach Falls, stunning (and angering) the great detective’s legion of fans. Doyle, who famously said that Holmes “kept him from better things” (meaning, the more important, much less popular works that Doyle really wanted to write), insisted that he was done with Holmes and that was that.

Of course, from August 1901 through September of 1902, The Strand Magazine serialized the most famous of all the Holmes tales, The Hound of the Baskervilles. But Doyle let fans know that this was a tale from before Reichenbach and the great detective was still D-E-A-D dead.

However, the temptation of big and easy money was too much for the author to resist and he was lured into writing the short stories that made up The Return of Sherlock Holmes.

However, most casual fans do not know that Doyle actually gave Holmes a return appearance in 1896: yes, five years before Watson travelled to Dartmoor with Sir Henry. Read on…

“I should certainly do it,” said Sherlock Holmes.

I started at the interruption, for my companion had been eating his breakfast with his attention entirely centered upon the paper which was propped up by the coffee pot.  Now I looked across at him to find his eyes fastened upon me with the half-amused, half-questioning expression which he usually assumed when he felt he had made an intellectual point.

He smiled as he took his slipper from the mantelpiece and drew from it enough shag tobacco to fill the old clay pipe with which he invariably rounded off his breakfast.

“A most characteristic question of yours, Watson,” said he.  “You will not, I am sure, be offended if I say that any reputation for sharpness which I may possess has been entirely gained by the admirable foil which you have made for me.  Have I not heard of debutantes who have insisted upon plainness in their chaperones?  There is a certain analogy.”

Our long companionship in the Baker Street rooms had left us on those easy terms of intimacy when much may be said without offence.  And yet I acknowledged that I was nettled at his remark.

“I may be very obtuse,” said I, “but I confess that I am unable to see how you have managed to know that I was… I was…”

“Asked to help in the Edinburgh University Bazaar…”

“Precisely.  The letter has only just come to hand, and I have not spoken to you since.”

“In spite of that,” said Holmes, leaning back in his chair and putting his fingertips together, “I would even venture to suggest that the object of the bazaar is to enlarge the University cricket field.”

I looked at him in such bewilderment that he vibrated with silent laughter.

“The fact is, my dear Watson, that you are an excellent subject,” said he.  “You are never blasé.  You respond instantly to any external stimulus.  Your mental processes may be slow but they are never obscure, and I found during breakfast that you were easier reading than the leader in the Times in front of me.”

“I should be glad to know how your arrived at your conclusions,” said I.

“I fear that my good nature in giving explanations has seriously compromised my reputation,” said Holmes.  “But in this case the train of reasoning is based upon such obvious facts that no credit can be claimed for it.  You entered the room with a thoughtful expression, the expression of a man who is debating some point in his mind.  In your hand you held a solitary letter.  Now last night you retired in the best of spirits, so it was clear that it was this letter in your hand which had caused the change in you.”

“It is all obvious when it is explained to you.  I naturally asked myself what the letter could contain which might have this affect upon you.  As you walked you held the flap side of the envelope towards me, and I saw upon it the same shield-shaped device which I have observed upon your old college cricket cap.  It was clear, then, that the request came from Edinburgh University – or from some club connected with the University.  When you reached the table you laid down the letter beside your plate with the address uppermost, and you walked over to look at the framed photograph upon the left of the mantelpiece.”

It amazed me to see the accuracy with which he had observed my movements. “What next?” I asked.

“I began by glancing at the address, and I could tell, even at the distance of six feet, that it was an unofficial communication.  This I gathered from the use of the word ‘Doctor’ upon the address, to which, as a Bachelor of Medicine, you have no legal claim.  I knew that University officials are pedantic in their correct use of titles, and I was thus enabled to say with certainty that your letter was unofficial.  When on your return to the table you turned over your letter and allowed me to perceive that the enclosure was a printed one, the idea of a bazaar first occurred to me.  I had already weighed the possibility of its being a political communication, but this seemed improbable in the present stagnant conditions of politics.

“When you returned to the table your face still retained its expression and it was evident that your examination of the photograph had not changed the current of your thoughts.  In that case it must itself bear upon the subject in question.  I turned my attention to the photograph, therefore, and saw at once that it consisted of yourself as a member of the Edinburgh University Eleven, with the pavilion and cricket field in the background.  My small experience of cricket clubs has taught me that next to churches and cavalry ensigns they are the most debt-laden things upon earth.  When upon your return to the table I saw you take out your pencil and draw lines upon the envelope, I was convinced that you were endeavoring to realise some projected improvement which was to be brought about by a bazaar.  Your face still showed some indecision, so that I was able to break in upon you with my advice that you should assist in so good an object.”

I could not help smiling at the extreme simplicity of his explanation.

“Of course, it was as easy as possible,” said I.

My remark appeared to nettle him.

“I may add,” said he, “that the particular help which you have been asked to give was that you should write in their album, and that you have already made up your mind that the present incident will be the subject of your article.”

“It is as easy as possible,” said he, “and I leave its solution to your own ingenuity.  In the meantime,” he added, raising his paper, “you will excuse me if I return to this very interesting article upon the trees of Cremona, and the exact reasons for the pre-eminence in the manufacture of violins.  It is one of those small outlying problems to which I am sometimes tempted to direct my attention.”

Doyle attended the University of Edinburgh, where he met Dr. James Bell and the road to Holmes began. But Doyle didn’t seem to hold any particular affection for his alma mater. Yet, when the University reached out to the famous author to assist in fund raising efforts for a new cricket field, he jumped in.

“The Field Bazaar” appeared in The Student, Edinburgh University, Bazaar Number, in November of 1896. Curiously, the new field’s grand opening had already occurred in May of the same year: figure that one out. Regardless. Though it was a trifling thing, and not very many people probably saw it, the short short proved that Doyle wasn’t 100% averse to writing anew about Holmes. If he was completely resolved to leave Holmes at the foot of the Reichenbach Falls, there would be no “Field Bazaar.”

Of course, those Sherlockians who delight in finding those little inconsistencies that Doyle (likely through lack of care) peppered the stories with, were rewarded. Holmes says, rather rudely, “This I gathered from the use of the word ‘Doctor’ upon the address, to which, as a Bachelor of Medicine, you have no legal claim.”

This contradicts A Study in Scarlet, in which Watson claimed he did receive a Doctor of Medicine degree. I vote for Watson and against Doyle!

Watson played rugby, which we learned in “The Sussex Vampire.” But there are no mentions of an interest in cricket anywhere else in the Canon.

It is amusing that after Watson points out how easy Holmes’ deduction was, that the detective makes one more pronouncement and leaves Watson to his own devices to figure it out.

The other Holmes short short from Doyle, “How Watson Learned the Trick” (which I mentioned here in my own short short pastiche) was published in 1924.

Howdy Ken – I don’t remember Watson attending school in Scotland at all. Do you have a reference? I just know he got his MD from the University of London then went through army medical training at Netley.

I find it odd that Sherlockians decree the Canon to be 60 stories – the 4 novels and 56 short stories. The Field Bazaar and How Watson Learned the Trick are 100% acknowledged to have been written by Doyle. No dispute at all. And they’re about Holmes and Watson. And they’re not parody. Why aren’t they considered Canon?

Bob, the reference is the one you have kindly provided. If the canon provides no direct contradiction, then from this vignette we can infer that Watson attended the University of Edinburgh (where he at least briefly played cricket) and was awarded a Bachelor’s degree in medicine. Thereafter he enrolled in the University of London. Res ipsa loquitur. On the other hand, this might be one of those internal inconsistencies Arthur Conan Doyle allowed on occasion, such as the quantum jezail bullet occupying multiple points of Dr. Watson’s body simultaneously. My preference is to find consistency when possible.

Ken – So, moving along your path, how do we reconcile Holmes saying that Watson was not a Bachelor of Medicine?

I toss the deerstalker back to you!

“This I gathered from the use of the word ‘Doctor’ upon the address, to which, as a Bachelor of Medicine, you have no legal claim.” Holmes’ point was that, as the University of Edinburgh had conferred ‘only’ a bachelors degree instead of a doctorate, it should not have referred to him as ‘Doctor.’ I take this as a rather feeble joke, as Holmes well knew that the University of London had conferred upon Watson his doctorate. But, I merely speculate. I make no assertions.