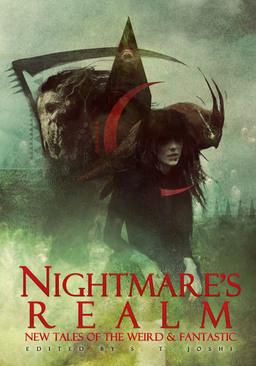 The striking cover artwork is by Samuel Araya (click the image at right for a bigger version). The limited edition is well out of my price range at $150, but there’s a trade paperback and digital edition promised for early next year as well.

Dreams and nightmares — what Ambrose Bierce called “visions of the night” — are the basis of some of the greatest weird fiction in literary history. The unruly images that torment us in sleep are usually dispelled by the coming of day — but can they be dismissed so easily? Do nightmares have some impalpable reality that can affect our daily lives, the lives of those around us, and perhaps the very fabric of the universe?

This volume contains seventeen original stories by some of the leading contemporary writers of weird fiction. Each tale probes the relation of nightmares to the real world, and to the human mind, in ways that are baffling, intriguing, terrifying, and poignant. Are we dreaming or are we awake? Can dreams gain a kind of quasi-reality and affect the workings of the real world? Can technology enhance or even create a dream-realm?

Who can say that the nightmare is merely a wisp of fancy engendered by our own minds? After all, it was Edgar Allan Poe who said: “All that we see or seem is but a dream within a dream.”

Introduction by S. T. Joshi
Prologue: To a Dreamer by H. P. Lovecraft
“The Dreamed” by Ramsey Campbell
“A Predicament” by Darrell Schweitzer
“Kafkaesque” by Jason V Brock
“Beneath the Veil” by David Barker
“Dreams Downstream” by John Shirley
“Death-Dreaming” by Nancy Kilpatrick
“Cast Lots” by Richard Gavin
“The Wake” by Steve Rasnic Tem
“Dead Letter Office” by Caitlín R. Kiernan
“The Art of Memory” by Donald Tyson
“What You Do Not Bring Forth” by John Langan
“The Barrier Between” by W. H. Pugmire
“Sleep Hygiene” by Gemma Files
“Purging Mom” by Jonathan Thomas
“The Fifth Stone” by Simon Strantzas
“In the City of Sharp Edges” by Stephen Woodworth
“An Actor’s Nightmare” by Reggie Oliver
Epilogue: Dream-Land by Edgar Allan Poe

Nightmare’s Realm: New Tales of the Weird & Fantastic will be published by Dark Regions Press in a deluxe signed limited edition hardcover format for $150, with an early ebook download exclusively for preorder customers. The regular ebook and trade paperback editions are scheduled to be published in Q1 2017. The trade paperback will feature a normal trim size of 6″x9″ with the deluxe edition being oversized at 7″x10″.

Get more details at the Dark Regions website here.