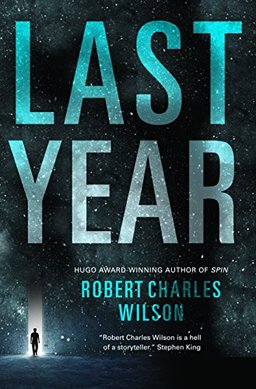 Robert Charles Wilson won the Hugo Award for Spin; he’s also the recipient of the Philip K. Dick Award, the Aurora Award, and the John W. Campbell Award. His novels Darwinia (1998) and Blind Lake (2003) were also Hugo nominees. His recent novels include The Chronoliths (2001), Julian Comstoc (2009), and Burning Paradise (2013).

His newest, Last Year, is “an alternative history novel, a time travel novel, and a whodunit all in one” (Booklist). It’s available in hardcover from Tor next week.

Two events made September 1st a memorable day for Jesse Cullum. First, he lost a pair of Oakley sunglasses. Second, he saved the life of President Ulysses S. Grant.

In the near future of Robert Charles Wilson’s Last Year, the technology exists to open doorways into the past — but not our past, not exactly. Each “past” is effectively an alternate world, identical to ours but only up to the date on which we access it. And a given “past” can only be reached once. After a passageway is open, it’s the only road to that particular past; once closed, it can’t be reopened.

A passageway has been opened to a version of late 19th-century Ohio. It’s been in operation for most of a decade, but it’s no secret, on either side of time. A small city has grown up around it to entertain visitors from our time, and many locals earn a good living catering to them. But like all such operations, it has a shelf life; as the “natives” become more sophisticated, their version of the “past” grows less attractive as a destination.

Jesse Cullum is a native. And he knows the passageway will be closing soon. He’s fallen in love with a woman from our time, and he means to follow her back — no matter whose secrets he has to expose in order to do it.