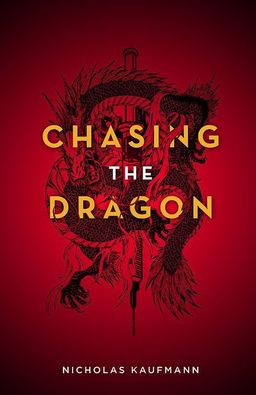 Chasing the Dragon is the sort of novel that you would probably never see from a big publishing house. It’s a tiny paperback at only 133 pages, an urban fantasy/mythology/horror blend with an added literary focus on the topic of addiction – the sort of combination that fits right in with the kind of excellent, outside-the-box work that ChiZine Publications produces. It also functions as a tight, focused narrative that could probably work just as well as a short story if some things were cut away. But I would never want that to happen.

The premise is straightforward: Young Georgia Quincey is the latest in a long line of warriors tasked with hunting and killing the Dragon, a task that each generation of her family has failed at. In tiny Buckshot Hill, she has another chance to fulfill her family’s destiny – if she can manage her heroin addiction. Kaufmann takes the idea of the flawed hero to a different level with Georgia, as her desperate hunt for both dragons (“chasing the dragon” is also a term for your first, perfect high) and her guilt and depression over losing her parents push her to the edge again and again. As the people around Georgia fall victim to her family’s curse and their undead bodies forced into serving the Dragon, I couldn’t decide what would be better for her: to succeed in her family’s quest or finally be given a measure of peace by dying at the hands of her enemy.

My one main criticism of Chasing the Dragon is that the novel’s ending is telegraphed pretty early in the novel, and I can’t quite decide whether the subtle reveal (and the fact that Georgia doesn’t realize her ace in the hole until the end) is meant to be noticed by the reader or not. I hope that Kaufmann intended for the reader to catch it; the information needed is, I think, pretty common knowledge. If it isn’t, that might say something about me (and I promise the last few sentences will make sense after you read the novel; I just don’t want to give anything away). At the end of the day, though, the way that Georgia ultimately faces the Dragon isn’t nearly as important as watching her deal with her demons and wondering whether she’ll make it to the end, both physically and mentally. There’s more than enough carnage and death around her, involving a series of really well-developed supporting characters, to make it hard to predict whether she will.

Cliched as it might sound, Chasing the Dragon is unlike any other novel I’ve read, and easily one of my favorite reads of 2016. It is definitely worth checking out if you like fantasy, horror, stories about the darker side of things (cuz heroin addiction is pretty dark) and deep, unique character work.

An Ottawa teacher by day, Brandon has published work in On Spec, Third Flatiron Anthologies, and elsewhere. Learn more at brandoncrilly.wordpress.com or on Twitter: @B_Crilly.

Nicholas Kaufmann - From the Better Late Than Never Department

[…] A tight, focused narrative…Chasing the Dragon is unlike any other novel I’ve read, and easil… […]