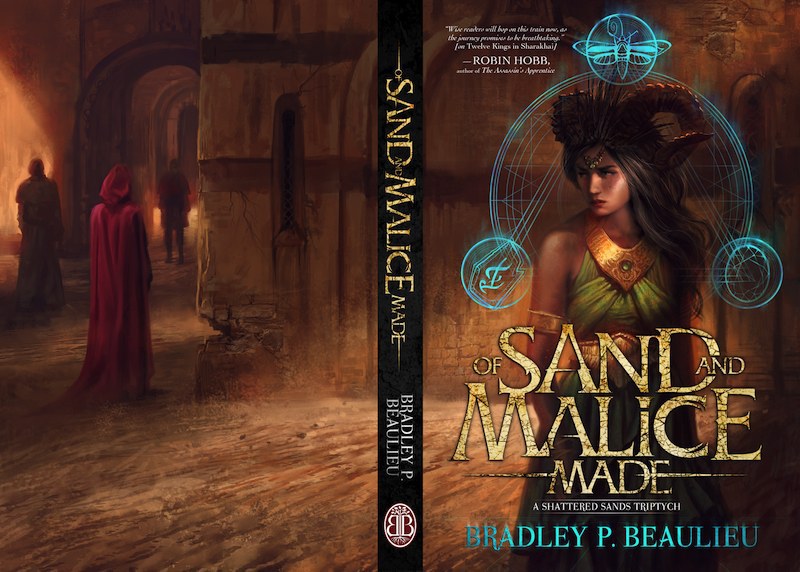 Bradley P. Beaulieu’s first novel in the Song of Shattered Sands series, Twelve Kings in Sharakhai, was published last September, and listed as one of the Best Books of the Year by Amazon, Barnes & Noble, and BuzzFeed. The next book in the series, Of Sand and Malice Made, tells an earlier tale of Çeda, the youngest pit fighter in the history of the great desert city of Sharakhai. It arrives in hardcover from DAW next week.

Çeda, the heroine of the novel Twelve Kings in Sharakhai, is the youngest pit fighter in the history of the great desert city of Sharakhai. In this prequel, she has already made her name in the arena as the fearsome, undefeated White Wolf; none but her closest friends and allies know her true identity.

But this all changes when she crosses the path of Rümayesh, an ehrekh, a sadistic creature forged long ago by the god of chaos. The ehrekh are usually desert dwellers, but this one lurks in the dark corners of Sharakhai, toying with and preying on humans. As Rümayesh works to unmask the White Wolf and claim Çeda for her own, Çeda’s struggle becomes a battle for her very soul.

The next installment in the series, With Blood Upon the Sand, is due in hardcover in February.

One wonders, or at least I do, why Beaulieu would choose to write a novel and then the prequel, rather than write the story that’s now a prequel first, then continue the story with Twelve Kings in Sharakhai as the second novel. This seems like a backward way to go about it.

Yeah, granted… but there’s no explanation for why muses strike the way they do.

Beaulieu wrote Twelve Kings in Sharakhai and it was a significant hit, and that gave him the freedom to go back and explore earlier stories. If he’d written Of Sand and Malice Made — which is a much smaller book — first, it might not have reached as wide an audience, and then there might not be enough interest from the publisher for him to write Twelve Kings in Sharakhai.

Altogether, it usually makes business sense to tell the big-cast, sprawling audience-pleasing epic first, and then go back and fill in the stories of individual characters if your audience demands it.

I have Twelve Kings on the shelf, but haven’t got to it yet. Now I wonder if I should wait and read Sand and Malice first. Thoughts?

Great question! If it were me, I might start with Of Sand and Malice Made first.

On the other hand, Twelve Kings seems to be the more popular book, and I tend to like to start with the good stuff first.