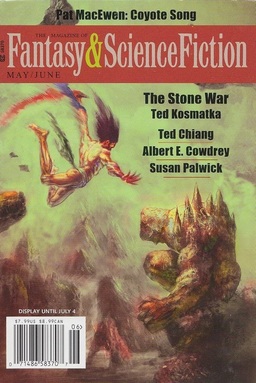 This novelette length fantasy reveals a world where a stone man lives with total indifference to the people passing through. The one brutal truth is that he kills anyone who directly or indirectly attacks him. At first, the consequences seem unimportant and localized. Until a king determines to find a way to use the stone man as a weapon to forward his desire for conquest. However, that proves to be much more of a challenge than he imagined. An interesting new look at what deterrent means and trying to curb our impulse to grow at the expense of others… well-written and engaging.

In fact, Kevin seems to like a lot of the May/June issue. Here he is on Albert E. Cowdrey’s “Steamboat Gothic.”

A horror mystery about a Louisiana sheriff investigating the gruesome murder of a film crew. Sheriff Chew has his own agenda that blurs the lines around justice, using fake evidence to pin the crime of someone who deserved to be jailed – a Deep Southern view. However, the real criminal turns out to be someone even the sheriff didn’t imagine. Cowdrey’s style quickly pulls the reader into the story, getting them invested in the characters and storyline. An enjoyable story to be sure.

The cover is by Max Bertolini. Here’s the complete Table of Contents.

This issue is on sale until July 4. We last covered F&SF with the March/April issue.

Our May Fantasy Magazine Rack is here, and all of our recent magazine coverage here.