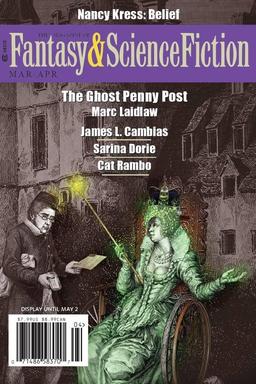 The longest story in the March/April issue of F&SF is John P. Murphy’s novella “The Liar,” which editor C.C. Finley introduces with, “If you’ve ever wondered what the result would be like if Garrison Keillor wrote a Stephen King story, then look no further.” In his review at Tangent Online, Jason McGregor writes:

Greg is a “liar,” which is to say someone who can tell broken things they aren’t really broken and, if he’s convincing enough, repair them with an imposition of will alone. When the old sexton can no longer perform his duties, Greg takes over and learns about the town’s secret: every November 5th, a teenager dies. Unraveling this supernatural mystery takes him back to a crashed WWII bomber nearby and another secret. Adding urgency to this fatal problem is that Greg and Pastor Julie have a budding relationship going and Julie has a wayward teenaged daughter…

[Murphy] creates interesting characters steeped in a sense of place (small-town New Hampshire) in which quite a bit does happen and, even when matters aren’t at a peak, I was content to hang out with the folks of the story. The realistic aspects are very well done, the fantasy is deftly woven in (and creative in recasting the essence of the supernatural element), and the horror adds spice.

This issue is on sale until May 2. We last covered F&SF with the January/February issue.

Our March Magazine Rack is here, and all of our recent magazine coverage here.