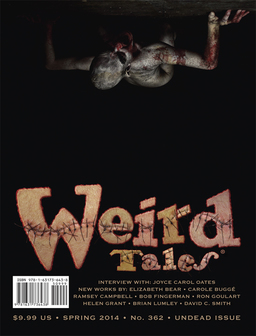 Weird Tales magazine, the oldest and most storied fantasy magazine in America, has died and returned numerous times in its near century-long history. And I’m beginning to wonder if it’s dead again.

Marvin Kaye took the editorial reins from Ann VanderMeer five years ago with much fanfare, but since then has produced only three issues — the last of which was two years ago. The magazine’s website has not been updated in well over two years. And worst of all, I’m now hearing reports from authors who sold work to the magazine that they’ve had stories returned with little or no explanation.

In fact, the lead story about Weird Tales these days is the complete lack of communication coming out of the editorial offices. At the Nebula Awards conference here in Chicago, which began yesterday, all mentions of the magazine have been accompanied by a shroud of gloom. And earlier today I received this from Black Gate author Joe Bonadonna, who sold a story to them several years ago:

Weird Tales is supposed to print one of my novellas on the online version of their Sword & Sorcery Special Edition — it’s too long for their print version. But it’s been 3.5 years since I heard from them, so who knows when that issue will be out? They are not very good at answering emails, and their website is terrible — no news on that either.

When a magazine essentially stops publishing, that’s bad news. When it fails to update its website for years, that worse. But when it goes dark for three years or more, it’s usually dead. So far, that yardstick has proven pretty reliable.

Weird Tales has been deader than this, and surged out of the grave before. I hope it does so again. But I’m beginning to doubt it.

It’s a famous name with brand recognition. I am sure someone will pay for it.

This link is to a panel on ‘The Heirs of Weird Tales’ at last year’s PulpFest. I was fortunate enough to attend and there is some neat discussion about the history of the magazine. Though I told one panelist I thought someone would bring up Hugh B. Cave!

I’ll be sad but not surprised if it’s true. And if it ever reappears, I’ll happily resubscribe, even if I haven’t read the fiction in, well, years.

I was lucky — I discovered the Terminus Scithers/Schweitzer/Betancourt revival shortly after it started, so was able to get a complete run of the digest-sized issues without too much difficulty. Have been a subscriber ever since, although I’d need to do some digging to try to figure out if I actually have all of the subsequent issues or if there are a few holes.

Sorry to say it, but it’s true. Marvin (God Bless Him!) tried to return the magazine to its roots when he bought it from Betancourt–but his advanced age must have been an issue–it’s really difficult and time-consuming to publish ANY magazine. Maybe if he’d hired a complete staff, but there was only John Harlacher helping him run the mag. (Doug Draa did the website until the previous owners let it expire and it exploded all over him.) Since then it’s be a big NADA.

I hope I’m wrong, but I have no faith that we’ll ever see another issue from Marvin.

Eventually, hopefully someone will buy it from Marvin and relaunch it in a manner that is consistent and respectful of its long and storied history.

Fingers are cross, but don’t hold your breath.

Meanwhile, not all is lost: WEIRDBOOK is now fulfilling the same role that WT used to. If we can get WB to quarterly status, that would be terrific. But WT seems to have retired to its tomb for a long, long sleep.

I wrote a blog piece about this issue last November: http://www.castaliahouse.com/whither-weird-tales/

Sad to hear. On a timely note, Weird Pulp magazines are already being respawned. Note the Skelos magazine on Kickstarter (open now May 2016) in which backers supported up to 3 issues already.

After Ann left, didnt the Vandermeers throw the new owner/publisher under the bus?

Great and very sad article, John. I haven’t even had my story returned without explanation, so I guess I’ll write the Marvin and take my story back so I can follow through with my plans for Mad Shadows 2. If someone else DOES buy Weird Tales and jump-starts its heart, then I’ll try writing and submitting something else.

John Harlacher has repeatedly told me that b ig things are right around the corner.

Ah yes, like a weird ghoul that sinks into the murky depths but rises again in new guises and incarnations…

With the numerous changings of the guard over the last decade, I’ve had the (unique?) distinction of both having had a poem published that I was never paid for and a poem not published that I WAS paid for (so I reckon it evens out).

Here’s how that happened: A poem that ran late in the DNA Publications era I had still not been compensated for when WT was sold to Wildside (John Betancourt informed me that payment for work in past issues was the responsibility of DNA, so I did not bother to pursue that).

The last poem that Schweitzer accepted from me under the Wildside imprint never ran, so when it switched hands again to the Vandermeers I contacted Ann to find out if it was still queued up for publication. She had no copy or record of it, but requested I send another copy to her AND sent me a check for it, sight unseen (thanks Ann!). I dutifully resent it; it was never printed, though.

And here’s the really WEIRD thing. I had previously had to resubmit that same poem to Schweitzer, as it had been lost once before by the previous editorial team… And maybe that’s for the best — it might be a poem that drives anyone who reads it INSANE!

P.S. That should be “re-sent” not “resent” (in this case a typo that very much changes the reading of that sentence!).