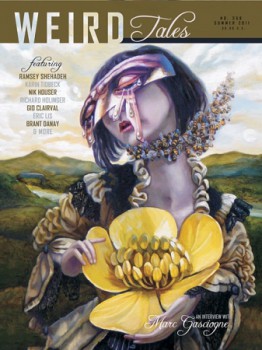 Marvin Kaye, author and editor of 28 genre anthologies, including Weird Tales: The Magazine That Never Dies, Masterpieces of Terror and the Unknown, and the World Fantasy award-winning The Fair Folk, has reportedly purchased Weird Tales from John Betancourt of Wildside Press, with the intention of editing it himself.

Current editor Ann VanderMeer reported the news on her blog:

I am very sad to have to tell you that my editorship at Weird Tales, which has included one Hugo Award win and three Hugo Award nominations, is about to come to an end. The publisher, John Betancourt of Wildside Press, is selling the magazine to Marvin Kaye. Kaye is buying the magazine because he wants to edit it himself. He will not be retaining the staff from my tenure. I wish him the best with the different direction he wants to pursue, including his first, Cthulhu-themed issue. The current issue of Weird Tales is #358, just published. My last issue will be #359, which Kaye plans to publish in February…

The past five years reading fiction for Weird Tales magazine has been an honor for me. I had a blast doing this but I have also contributed to the canon of “the weird tale”— a responsibility I take seriously, not only for the readers of today, but for the readers of tomorrow. This iconic magazine originally blazed a trail for new approaches to dark fantastical fiction, and I did my best to return to that legacy.

Technically the Weird Tales name is owned by Robert Weinberg and Victor Dricks, who purchased it in the late 1970s, and who have licensed it to multiple publishers over the past three decades, including Terminus Publications, DNA Publications, and Wildside Press.

While VanderMeer’s tenure at Weird Tales was occasionally controversial — especially among sword & sorcery fans — she took some brave risks with the magazine. With Stephen H. Segal she presided over an ambitious and successful redesign in 2007, brought home the first Hugo Award in the history of the magazine in 2009, and she assumed his post as editor-in-chief when Segal departed in January of last year. I thought she did a fine job, and she will be missed.

On the other hand, always glad to see a good Cthulhu-themed issue. I’m looking forward to seeing where Kaye intends to sail with Weird Tales.  I expect it will be places both strange and familiar.

I have a sneaking suspicion Kaye will be sailing “Weird Tales” to lands strongly reminiscent of those he already explored during his tenure at “H.P. Lovecraft’s Magazine of Horror” (published by Wildside and lasting until April 2009, putting out 5.5 issues). His first issue being “Cthulhu themed” does nothing to allay that suspicion.

Of course, I rather enjoyed “H.P. Lovecraft’s Magazine of Horror”, but I also seriously dug the latest “Weird Tales” — it had a bubbling vitality that was more subdued in its previous incarnation under Scithers (and this coming from a fan of the Scithers era). One thing I really appreciated about Segal & VanderMeer is that they seemed to take to heart that the original “Weird Tales” published all sorts of fiction that back then was, well, *weird* — in that it was new, different, and wasn’t found anywhere else. These days, Cthulhu is no longer weird in that sense — he/she/it is a more or less known commodity. Swords & sorcery is similarly no longer conceptually strange or unusual, which I believe is why Segal & VanderMeer did not publish much of it. [And if there were any doubts about swords & sorcery no longer being conceptually strange, “The Return of the King” taking home a Best Picture Oscar should have quashed them, as should the current phenomenon of “A Game of Thrones” being a serious HBO series.]

Still, the fact that “Weird Tales” continues to exist and that we actually care enough about it to debate its direction nearly a century after its birth is probably the best indicator that, no matter to which shoals Kaye ends up mooring “Weird Tales”, we will continue to be interested in (sometimes rabidly so) the “Unique Magazine”.

> These days, Cthulhu is no longer weird in that sense — he/she/it is a more or less
> known commodity. Swords & sorcery is similarly no longer conceptually strange or
> unusual, which I believe is why Segal & VanderMeer did not publish much of it.

I suppose it’s ironic that many of VanderMeer’s detractors were calling for a return to the familiar in the pages of Weird Tales… when in fact it was the un-familiar in the original that first captured their loyalty.

> “Technically the Weird Tales name” is owned by Viacom/MTV, actually

So I’ve been told, but could I confirm that yesterday? Not if my life depended on it, apparently.

When (and why) did Weinberg and Dricks sell the name to Viacom? I’m sure somebody remembers, but it ain’t me.

Nick Mamatas broke the news, publicly, on his blog, but it was known by a number of people for the last three years. You can confirm it for yourself by searching for WEIRD TALES on the US Trademark Database.

Nick explains more on his post, regarding the reasons why Weinberg sold the property. (I think Dricks was no longer a part of this, by then, having been bought out, but I’m going by memory.) Either way the private investor Marvin has is negotiating with Viacom regarding this, which is confirmed on his twitter feed, I believe.

[…] August Marvin Kaye surprised us by acquiring Weird Tales from Wildside Press, and last week we told you Realms of Fantasy magazine […]

[…] in August we reported that Wildside Press sold Weird Tales magazine to Marvin Kaye, leaving editor Ann VanderMeer out in the cold. But it didn’t take long for […]

[…] issue as editor, and the first from the new publishers, Nth Dimension media (as we reported back in August). It has fiction from Stephen Graham Jones, Tamsyn Muir, Evan J. Peterson, and many others, and […]

[…] to major artistic and philosophical differences with the existing editors.” As reported here last year, VanderMeer was replaced as editor by Marvin Kaye as the magazine transitioned to new Publisher Nth […]