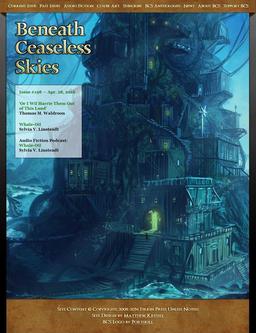 Brothers Henry and James have crossed an entire ocean to escape the religious persecution of their native England in “Or I Wil Harrie Them Out of This Land” by Thomas W. Waldroon. At first their new home is a paradise: wide, open spaces, the thrill of adventure and the freedom to explore any dream or ambition they might have. Before long, however, disease and conflicts with the natives begin to take their toll on the small community, and the Puritan settlement discovers that just because they’ve escaped from one evil, doesn’t mean they’re free from another…

The streets of 1880s San Francisco are lit with the oil of marine mammals in Sylvia V. Linsteadt’s “Whale-Oil.” Sixteen year-old Altair has a talent for seeing the sorts of other world things that no one else can. Call it a remnant of childhood imagination, but one night in the fog-thick streets, Altair looks up to find the tethered souls of hundreds of slaughtered whales and seals, bound to the lamps that burn their oil. Meanwhile, in a marsh out by the ocean, Old Iris stands on her heron’s legs for a long-awaited visitor to follow her blue lamp light to her hut. The world has grown too hungry, she knows, and all too soon it will end… Lovers of magical realism and the environmentally conscious will be charmed.

“‘Or I Wil Harrie Them Out of This Land’ by Thomas M. Waldroon
Henry’s horse ambles to a halt. James’s blank form is a shadow stretched across the sand and gravel, one arm raised in greeting.

“Whale-Oil” by Sylvia V. Linsteadt
Old Iris laughed. “Of course not, boy. I take only the bodies of those fish who offer themselves to my beak. But the world is too big now, and too hungry for light. More wanting out there than there are gifts to be given. For that, it will fall.”

“Whale-Oil” Sylvia V. Linsteadt
Altair stood at the edge of the bay holding a blue salmon oil lamp with wick and flame made of fallen stars.

“His Crowning Glory,” a new tale of the Antique Lands, by Noreen Doyle (from BCS #111)
Jon sat down in the doorway to watch the man go about whatever odd business his God had appointed to him.

This month’s cover, “Forest,” is by Geoffrey Icard. We last covered Beneath Ceaseless Skies with issue #197.

See our Late April Fantasy Magazine Rack here, and all of our recent Magazine coverage here.