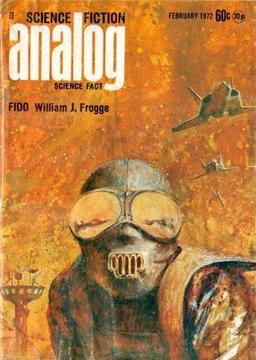 Not long ago I wrote about one of the last issues of Analog with John W. Campbell’s name on the masthead, along with a fairly early Ben Bova issue (November 1971 and October 1972). Here’s another issue from that period, officially Bova’s second. But Bova started work in November (I am told), so in all likelihood none of these stories were chosen by him. They must be among the last Campbell selections. (By the way, I earlier speculated that Kay Tarrant or someone else might have chosen a few stories from the slush pile between Campbell’s death in July and Bova’s hiring, but Mike Ashley assures me that no stories were bought in that interregnum.)

This issue has a cover by John Schoenherr. Interiors are by Schoenherr and Kelly Freas. The editorial is by Bova – his first. (The January issue, officially Bova’s first, had a guest editorial by Poul Anderson.) It’s called “The Popular Wisdom,” and it celebrates Campbell’s tendency to dispute conventional answers.

The Science article is also by Bova, “When the Sky Falls,” about exploding stars and even galaxies, and neutron stars, quasars, and black holes. P. Schuyler Miller’s Book Review column, The Reference Library, begins by discussing the increased attention academia was paying to SF, and recommends Thomas Clareson’s collection of non-fiction about SF: SF: The Other Side of Realism. The other books he covers are Isaac Asimov’s second Hugo Winners anthology, Abyss by Kate Wilhelm, Android at Arms by Andre Norton, and Gray Matters by William Hjortsberg. He liked them all, but chides Hjortsberg a bit for his lack of knowledge of real SF. The letter column is absent.

A Spaceship for the King (Conclusion), by Jerry Pournelle (19,000 words) 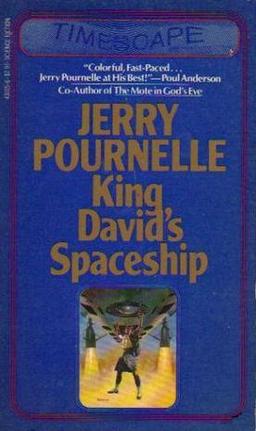 I read A Spaceship for the King a long time ago, in 1975 or so. Indeed, something makes me think I read it in the serialized version, with copies of the magazine borrowed from my local library. (If so, I know I didn’t read the rest of the stories.) I remember enjoying it quite a lot. It’s about a military hero who is inveigled into procuring a spaceship for the king of his backward planet, which will allow the planet to legally take full membership in the space Empire. This was published in book form by DAW in 1972, then revised as King David’s Spaceship in 1980. Memory suggests that, as usual, the revised version is longer and probably better written and somehow less fun than the original. It also changed (or at least extended) the plot a fair bit.

The two novelettes, frankly, strike me as half-finished stories, in more or less late-Campbell mode, and I almost wonder if he might not have worked with the writers on improving the stories had he lived. “Fido” is William J. Frogge’s only story. It opens with a U. S. Air Force Base in Italy failing to respond to a normal check in call. A couple of fighters are routed to fly over the base and see if anything unusual is going on. When they get too close, one of the pilots seems to lose it and lands, without responding to radio calls. The other one, Pappy Dunn, feels strange and almost drowsy, but resists and returns to his base. He ends up assigned to investigate more closely, and before long it seems he’s the only person immune to whatever is affecting the base, so he goes in and… I’m sure most SF readers can guess the rough parameters of what’s going on. The story is rather too long, with too much half-amusing business about the attitudes of a couple different Air Force Generals, and the conclusion, though kind of logical, is also kind of inconclusive. I’d say it showed promise, and had no business being the cover story of a major SF magazine.

Likewise, “The Sword of Cain” is Henry Sauter’s only story, but he did appear once again in Analog, with a Science Article that got cover notice: “Solar Heating and Wind Power – Available Today!,” from January 1976, the issue that featured part 1 of Frank Herbert’s Children of Dune. You’d think that would get the cover, and it really did, I suppose – the illustration is surely for it, and Children of Dune by Frank Herbert is given on a diagonal stripe across the upper right.

But back to “The Sword of Cain.” It’s set in a future in which, Larry Niven’s “Jigsaw Man”-like, medical technology has advanced so that people can live a long time as long as they can get the right transplants. Thus, kidnapping in order to obtain worthwhile transplant material is common. We open with Simon, a nasty man being told he needs to find two bodies – one for him, and one for his doctor – in order to get the whole-body transplant he needs. He finds a young man soon after, and saves him from kidnappers, after which they escape to the mountains. 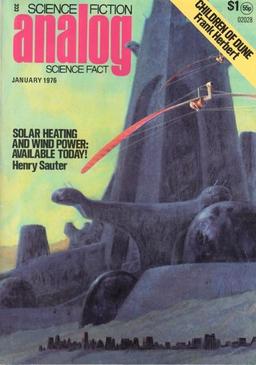 Then, confusingly, we switch to the viewpoint of Cain, who seems to be the product of a doctor who has found a way to give people new body parts without stealing them from living humans – in Cain’s case, perhaps animals are one source. He’s a former “heavy” – bodyguard – and he finds himself engaged in a battle with a leading heavy, while hoping to convince them that his doctor friend’s approach is better… his path intersects with Simon eventually, and, well… Again, no surprises, and a story that ended before it really got anywhere important. For all that, there were some interesting aspects, and a thorough rewrite, and extension, might have been something decent.

The two short stories, both by veterans of the field (though Joseph Green was much earlier in his career than Robert F. Young), are better – solid professional work, though neither great work. Young’s “Genesis 500” is kind of science fantasy, positing that primitive people (on different planets in this case) can bring actual “gods” to life by believing in them enough. This necessitates, in this Galactic society, people who visit these planets to destroy the gods – they are too dangerous to leave alone. This particular god is a bit more resistant than usual, particularly using the device of the woman made perfectly for our hero, who he must resist and do his duty. Minor stuff, but acceptable.

Green’s “One Man Game” has an exploring ship visiting a mysterious planet, which seems almost a paradise. But over time the strange birdlike bipeds they call Fasties seem to become almost dangerous – nobody is harmed, but they move so fast, and can never be caught – what if they did become hostile? The stodgy leader of the scientific half of the crew insists they much catch one, by shooting if necessary, and wiser heads protest that that’s no way to treat a potentially intelligent species. There’s a solution to the question of why they are so fast, which is kind of original; though the resolution of the true nature of this planet, and the real home of the Fasties, fell a bit flat for me. Still, solid back of the book material.

The best thing here is the Pournelle serial, enjoyable work and a strong early harbinger of a significant career. Most of the rest is testimony to the fatigued nature of so many late Campbell issues, exacerbated perhaps by the circumstances of this issue’s production; with the two short stories being decent enough minor work.

Rich Horton’s last Retro-Review for us was the March 1964 issues of Amazing Stories. See all of his BG reviews here.