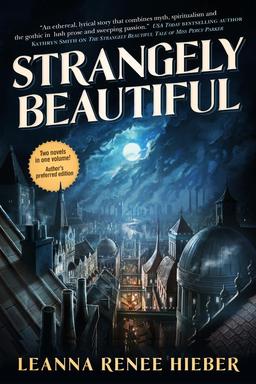 Leanna Renee Hieber is the author of the Magic Most Foul trilogy, The Eterna Files, and its sequel Eterna and Omega.

Her early novels The Strangely Beautiful Tale of Miss Percy Parker and The Darkly Luminous Fight for Persephone Parker were originally published in paperback by Leisure Books in 2009 and 2010, and they’re now getting harder to find. Fortunately, Tor has bundled both critically acclaimed novels into a single volume, bringing them back into print in a handsome new revised edition. It will be available in trade paperback at the end of the month.

Miss Persephone Parker ― known as Percy ― is different, with her lustrous, snow-white hair, pearlescent pale skin, and uncanny ability to see and communicate with ghosts. Seeking to continue her education, Percy has come to Queen Victoria’s London, to the Athens Academy. What she will learn there will change her life forever.

Athens Academy is the citadel of The Guard, an ancient order that battles the forces of evil. The Victorian Guard, led by professor Alexi Rychman, is incomplete. They cannot defeat Jack the Ripper ― who is more than the serial killer he appears to be ― or the greater monster his appearance heralds.

Percy’s lifelong habit of concealment combined with Alexi’s fevered search for the Guard’s missing seventh nearly prove disastrous as ancient Greek myths begin playing out in modern, gaslit, Victorian London. Percy and her new friends and allies must overcome their preconceptions about each other and their own histories before they can set the world to rights.

These two books were followed by two more in the same series: The Perilous Prophecy of Guard and Goddess (2011) and Miss Violet & the Great War (2012). No word yet on whether Tor plans to reprint them as well.

Oh my gosh! I so badly want to read this!