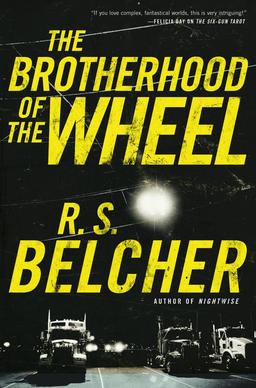 In my previous article on R. S. Belcher’s The Brotherhood of the Wheel, I called it “the opening volume in a new urban fantasy about a mysterious society of truckers.” Faren Miller over at Locus Online can do much better than a one-sentence description — and she does, with an enthusiastic review.

Though Tor calls R.S. Belcher’s The Brotherhood of the Wheel an ‘‘urban fantasy,’’ it also describes the novel as set on ‘‘the haunted byways and truck stops of the US Interstate Highway System.’’ Roads – both real and metaphorical – are crucial to this dark fantasy, focusing and expanding the power of magics that range from the latest trends in ghosts and weird critters discussed on bad-ass websites, to entities transplanted to the New World from pre-Christian Europe and points beyond.

We begin with big rig truck driver Jimmie Aussapile, one of what proves to be a won­derfully miscellaneous bunch of people who oppose the forces of evil in tense scenes that gradually reveal connections between events in towns, suburbs, and cities of the Midwest and the South: Illinois, Kansas, Tennessee, Louisiana. Appearing near the mid-point of Belcher’s previous novel Nightwise, Jimmie, his tractor trailer, and a passing mention of the Brotherhood prompted Belcher’s literary agent to urge him to write more about them, as noted in the Acknowledgements here. I’m delighted that he followed her suggestion, in his own devious way. He has a masterful ability to move between assorted viewpoint characters in multiple plotlines kept separate long enough to become distinct: just hinting at links that may strengthen, but don’t become full alliances until hard action with shared danger breaks down the barriers between them.