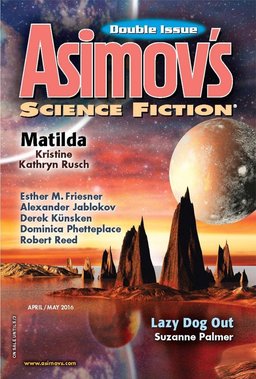 The April/May issue of Asimov’s Science Fiction, a big double issue, contains a brand new novelette from Black Gate blogger Derek Künsken, “Flight from the Ages.” It also offers a novella from Suzanne Palmer, novelettes by Kristine Kathryn Rusch, Alexander Jablokov, and others, and short stories by James Van Pelt, Robert Reed, Esther M. Friesner, and others. Here’s the full description from the website:

Suzanne Palmer delivers April/May 2016’s thrilling novella, “Lazy Dog Out.” In a race against time and an unknown enemy, a tugboat captain must depend on her crew and her ingenuity to defend her space station. Betrayal and intrigue abound in this life and death struggle to protect humans and aliens from a sinister organization.

C.W. Johnson spins an exciting tale about people ensnared inside an alien creature whose size defies speculation. It’s not long before you realize that characters should be as fearful “Of the Beast in the Belly” as they are of the leviathan. Derek Künsken  escorts us into the deep future for an all out “Flight from the Ages”; “Matilda” and her pilot face enigmatic aliens in Kristine Kathryn Rusch’s terrifying new novelette; and brave souls must take on the “Starless Night” of a distant planet in a new story by Robert R. Chase. The violence and endless repercussions of war rage back on Earth in new to Asimov’s author T.R. Napper’s “Flame Trees”; Alexander Jablokov invites us to the eerie reunion of three men who revisit their past to uncover multiple truths about “The Return of Black Murray”; Esther M. Friesner turns to a far more distant past to examine the suffering of “The Woman in the Reeds”; James Van Pelt reveals that some people will have art at any cost in “Three Paintings”; Robert Reed brings us a chilling tale about “The Days of Hamelin”; and Dominica Phetteplace presents us with a new perspective as her unusual experiment continues in “Project Synergy.”

April/May’s Reflections finds Robert Silverberg “Thinking About Homer”; Peter Heck’s On Books examines works by Charles Stross, C.A. Higgins, Seth Dickinson, Stephen Baxter, and Peter Cline; plus we’ll have an array of poetry and other features you’re sure to enjoy.

“Lazy Dog Out,” Suzanne Palmer
Khifi traded the warm embrace of her wife’s arms for the pricking of cold air on her bare skin and a regret she knew she would not dispel until she was back here again on the far side of a ten-hour shift. She danced on her toes across the metal floor and out of their small sleeping alcove, sliding the screen doors closed behind her. Lema had more than once suggested she keep her boots at the bedside so she could slip straight into them, but if she did she couldn’t sneak out without waking her.

“Matilda,” Kristine Kathryn Rusch
Devi ran for the single ship. It was cradled in the docking bay, like a hammock rolled up against a wall. The single ship liked her the best. Like a ship’s cat — always liking the one that hated it.
But she piloted the single ship better than anyone else. LaFayette said that was because the symbiosis worked with her and the single ship. LaFayette claimed to know. He’d parented half a dozen single ships in his day, raising them from a traumatized nub of consciousness to something large…

“The Return of Black Murray,” Alexander Jablokov
“Project Synergy,” Dominica Phetteplace
“Flight from the Ages,” Derek Künsken
“Of the Beast in the Belly,” C. W. Johnson

Guest Editorial: The One Myth About Writers that Drives Me Crazy, Charlie Jane Anders
There are tons and tons of myths about writing and writers—which makes sense, because we make up myths for a living, right? But many of these myths and old saws are just kind of silly. The one that drives me nuts is the idea that there are novelists and there are short fiction writers, but many (most?) writers can’t do both.

Reflections: Thinking About Homer, Robert Silverberg
Homer? Homer? Why write about Homer in a science fiction magazine? The Iliad isn’t SF. It’s a gory tale of Bronze Age warfare. (Surprisingly gory. The battle scenes, with Homer describing where the spear goes in, which organs it encounters on the way through, and what happens to the spearee when Achilles has finished spearing him, make Game of Thrones seem as tame as Alice in Wonderland.)

On Books, Peter Heck
Stross’s sixth novel in the “Laundry Files” series is the first not to be narrated by Bob Howard, a computer geek working for the secret agency — code name “the Laundry” — that defends Britain from occult threats. This book picks up the story from the point of view of his wife Dominique — “Mo” to her friends — who works for the same agency.

The April/May issue went on sale March 29. It will be on sale until May 3.

We last covered Asimov’s SF with the March 2016 issue.

Our April Fantasy Magazine Rack is here. See all of our recent fantasy magazine coverage here.