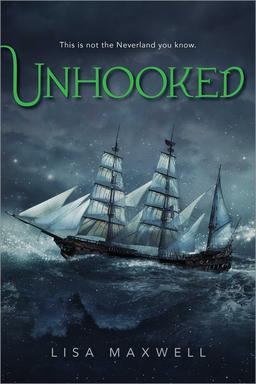 Lisa Maxwell is the author of Sweet Unrest and Gathering Deep. Her latest is an unusual retelling of Peter Pan…. or, if you prefer, an atmospheric fantasy novel about a kidnapped girl brought to an island inhabited by fairies, a roguish ship captain, and bloodthirsty beasts.

For as long as she can remember, Gwendolyn Allister has never had a place to call home. Her mother believes they are being hunted by brutal monsters, and those delusions have brought them to London, far from the life Gwen had finally started to build for herself. Gwen’s only saving grace is that her best friend, Olivia, is with her for the summer.

But shortly after their arrival, the girls are kidnapped by shadowy creatures and dragged to a world of flesh-eating sea hags and dangerous Fey. And Gwen begins to realize that maybe her mother isn’t so crazy after all…

Gwen discovers that this new world she inhabits is called Neverland, but it’s nothing like the Neverland you’ve heard about in stories. Here, good and evil lose their meaning and memories slip like water through your fingers. As Gwen struggles to remember where she came from and tries to find a way home, she must choose between trusting the charming fairy-tale hero who says all the right things and the captivating pirate who promises to keep her safe.

Caught in the ultimate battle between good and evil, with time running out and her enemies closing in, Gwen is forced to finally face the truths she’s been hiding from all along. But can she save Neverland without losing herself?

The stage has also seen a resurgence in Peter Pan lit. I reviewed PETER AND THE STARCATCHER a few years back in these pages, and Sarah Ruhl’s new play is FOR PETER PAN ON HER SEVENTIETH BIRTHDAY, currently at Actors Theatre of Louisville and heading, I believe, to Berkeley Rep in short order. Liberties are taken! And why not? Now that its copyright has run out, Peter and Tinkerbell are the property of children (and adults) everywhere.

I’m sure there are people for whom messing with Peter Pan is sacrilege, but I’m not one of them. If you don’t approve of modern authors building on classic fantasy, then don’t read them. For the rest of us, it’s good to see a fresh look at a treasured tale.

Yep. We agree to agree.

Sounds intriguing. I’ll see if the library has it.

Nope, not even on order.