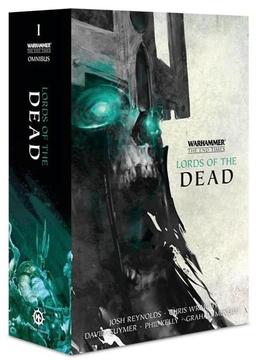 I really enjoy these Warhammer omnibus editions. They’re a tremendous bargain, for one thing. They typically contain 2-3 full length novels, plus the assorted short story or two. I’ve collected more than a few, and while I especially enjoy the science fiction offshoot, Warhammer 40K, the straight-up Warhammer volumes have proven to be a reliable source of modern sword & sorcery, most notably the tales of Gotrek & Felix, C. L. Werner’s Brunner the Bounty Hunter, and Kim Newman’s The Vampire Genevieve.

I’m extremely interested in the new omnibus Lords of the Dead, which includes the first two novels in the End Times series: Chris Wraigh’s The Fall of Altdorf, and The Return of Nagash, by Black Gate blogger Josh Reynolds, author of our popular series on The Nightmare Men. Here’s the description.

The fate of The Old World hangs in the balance. Heroes rise and fall as they battle the Ruinous Powers in a last desperate attempt to save the mortal realm. The Gods of Chaos only want total destruction and their victory seems inevitable……

The Return of Nagash

As the forces of Chaos threaten to drown the world in madness, Mannfred von Carstein and Arkhan the Black put aside their difference and plot to resurrect the one being with the power to stand against the servants of the Ruinous Powers and restore order to the world – the Great Necromancer himself. As they set about gathering artefacts to use in their dark ritual, armies converge on Sylvania, intent on stopping them. But Arkhan and Mannfred are determined to complete their task. No matter the cost, Nagash must rise again.

The Fall of Altdorf

With the hordes of Chaos marshalling in the north, Emperor Karl Franz leads his armies in defence of his realm. But when the worst happens and the Emperor is lost, it falls to Reiksmarshal Kurt Helborg to return to Altdorf, capital of the Empire, and prepare to meet the forces of the Ruinous Powers in a final battle for that ancient city. As plague spreads and the defences weaken, all seems lost, until help arrives from a most unexpected source… if Helborg can bring himself to accept it.

Here’s the front and back cover for for The Return of Nagash (click for bigger versions).

Here’s the original cover for The Fall of Altdorf (click to embiggen).

Warhammer: Lords of the Dead was published by Games Workshop on February 9, 2016. It is 928 pages, priced at $19.99 in trade paperback. No word on a digital edition, but it’s probably available directly from GW.

See all of our latest New Treasures here.