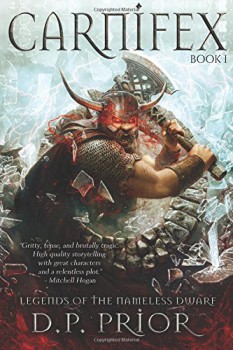 The self-published book review is back! As you may remember, I went on a hiatus while I worked on a new project. Now that the open reading period for Mysterion is over, I can focus my reading time on other matters. Among them, self-published books I’m reviewing. If you have a book you’d like me to review, please see this post for instructions to submit.

A while back, I reviewed D.P. Prior’s The Nameless Dwarf. At the time I complained about not being able to find the earlier books in the series. It may be, however, that the earlier books didn’t exist, as Carnifex has only been recently published, and it is very much one of the prequels that The Nameless Dwarf was missing. In fact, the title gives away the biggest secret of the original, Nameless’s original name. It is a name which is also a prophecy, as Carnifex means butcher.

The soon-to-be-nameless dwarf lives with his brother and father in Arx Gravis, the city of dwarves hidden in a ravine. No one is allowed to come or go from the city without the express permission of the council, and they never allow any dwarf to leave. The only person who can come and go at will is the human philosopher, Aristodeus.

Carnifex Thane is a member of the Ravine Guard, a police force as well as a border patrol, and given how peaceful and isolated the city is, the guard seldom has much to do. That changes quickly when a homunculus sneaks into the Scriptorium, where he may have tampered with the Archives of the dwarves’ history. This is followed by a golem invading the mines, and suddenly the city is in an uproar with the fear that there may be more coming. Lucius, Carnifex’s brother, has a solution: the Pax Nanorum. The Axe of the Dwarf Lords was lost ages ago, but may be the key to fighting the golems. But the records of its location are contradictory: is it lost in the pits of Gehenna beneath Arx Gravis, or forgotten in sunken Arnoch, city of the Dwarf Lords? Which is the true history, and which is but myth, or worse, the result of the homunculus’s tampering? The answer may be the difference between the salvation and destruction of the dwarves. Whichever is true, leaving Arx Gravis without the express permission of the council is a death sentence at the hands of the Black Cloaks, the city’s secret police, spies, and assassins. One of whom has a personal grudge against Carn.

Despite the desperate action sequences, much of Carnifex is surprisingly domestic, dwelling on the relationship between Carn and his father and Lucius, and on Carn’s best friend Thumil and their mutual love interest Cordy. We see a lot about his position as a lieutenant in the Ravine Guard, his desire to see the world from which he’s forbidden, and the bouts of depression which frequently drag him down. These things form the core of Carnifex’s identity and loves. And getting to know, and care about, these parts of his life is the most difficult part of the book. Because by the end I did care about those people—all of them, including Carnifex, were flawed but fundamentally decent people. But I had read The Nameless Dwarf, and I knew what was coming, and how it all ends. That knowledge made the book both hard to continue reading and hard to put down.

The novel is not without its flaws. Like many self-published novels, it has its share of typos and minor plot-holes. I felt the biggest weakness was the rushed ending, hurrying through the dreaded sequence rather than drawing it out, forcing the reader to face them. On the one hand, it was something of a relief, but on the other, Mr. Prior didn’t really allow the true dread time to take hold. The events leading up to the end seemed a little forced too, with the quest (of course there’s a quest) proceeding in an uncomplicated manner free of setbacks, with what could be considered a deus ex machina resolution. It’s enough to make you suspicious—which you should be—but also to make you wonder why the characters aren’t more suspicious as well.

There’s a tie-in at the end with another series by the author which won’t make a lot of sense to those who haven’t read about Deacon Shader, but I was happy to see that Mr. Prior is filling in those blanks which were so disruptive to The Nameless Dwarf.

I’ve had good luck with the independents. Yes, there have been a few bad attempts at a book but there has been more good than bad in my view.

I think we are seeing a new era of publishing. I’m willing to bet that in the future there will be editors for hire, copy editors, and such that support the independent writer. The industry has already seen a burst of cover artists for hire and such. Many writers like the idea of the perks of independent publishing over the established houses. One thing is for certain: A good editor can boost a writer.

Marketing is an area that is in a great flux. Writers published in traditional houses still have to do a lot of their own platforming. This is an area that the internet makes a level playing field in my view. Cream still rises to the top and good writing is still good writing. A good publisher I think helps but it doesn’t market with certainty like it did pre-internet. That is my take.