Typically my characters don’t spend a lot of their time eating. It’s not because I’m not interested in food, quite the contrary (see my previous BG posts on the subject, here, here, and here.) No, it’s usually because, if I can paraphrase my agent for a moment, I’ve found my characters something more interesting to do. Having your characters sit down and eat is a useful device, however, in that it does give them something to do – even if it doesn’t forward the plot – while they’re talking, which usually does forward the plot. As a general rule, characters need to be doing something while they talk to each other, and if they eat, you can also use the details of the food to help with world-building and setting.

Still, even when my characters are eating, they’re not usually attending a banquet. Indeed, banquets and eating scenes in general are usually something we encounter visually, rather than on the page. Who can forget the scene in the Errol Flynn version of The Adventures of Robin Hood, where he walks into Prince John’s supper banquet with a stag on his shoulders? 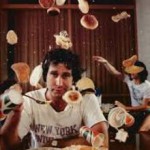 Then, for those of us who are old enough (or who are 18th-century scholars) there’s the scene in the movie Tom Jones, in which Jones and Mrs. Fitzpatrick seduce each other while they eat.  You’ll never see Cornish hens the same way again. And while I’m sure there’s something more recent, the food fight scene from Animal House has always been popular. Fans of Firefly, or of the many versions of Star Trek, for that matter, can recall episodes that included family-style meals, feasts, and general hanging-around-talking-in-the-bar. I always wondered whether anyone ever used the holodeck to go somewhere interesting to eat. I know I would have. 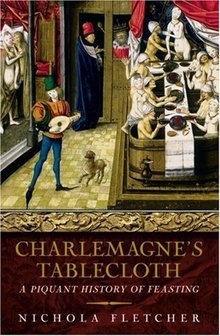 Now, if by chance we want to include a feast or memorable meal in one of our own books, as writers we’ve got plenty of resources (aside from stealing something from movies or TV, ahem.) Food and the preparation of food has become so popular lately that there are whole television networks devoted to it; recipes for practically anything are available on the internet, and there are all kinds of books, such as Charlemagne’s Tablecloth: A Piquant History of Feasting, that can give us ideas and historical context for any feasts we might need. 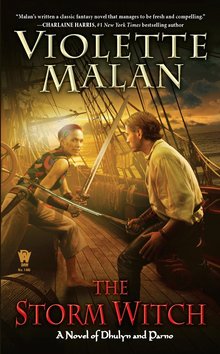 Luckily, I have several chefs in the family, and when I needed a royal feast for my novel The Storm Witch, I was able to draw on the experience of a meal prepared by the son of one of my cousins, Jose Ignacio Diaz Hellin, and his culinary partner, Alberto Dominguez Saenz. Both the original meal and the feast I made of it would take too much space to describe here (let me know if you’d like the details) but basically I turned a chef-chosen restaurant meal for five people into a feast by making each item a separate course.

In and of themselves, of course, feasts and the reasons behind them can tell your readers a great deal about the world you’ve created, and that’s another reason to think about food when world-building.

Gee, it’s January. I wonder what made me think about food and feasting?

Violette Malan is the author of the Dhulyn and Parno series of sword and sorcery adventures (now available in omnibus editions), as well as the Mirror Lands series of primary world fantasies. As VM Escalada, she is writing the upcoming Halls of Law series. Find her on Facebook and follow her on Twitter @VioletteMalan..

I remember a number of descriptions of food and meals in Lin Carter’s “The Wizard of Zao” – a short science fiction / fantasy work in obvious tribute to a lesser known and developed Clark Ashton Smith world. It was interesting but seemed to take from the story without adding to it as the description of the meals, one conjured by magic, the other prepared, had little to do with the story if anything.

The larger issue is the “Scifi/Fantasy doesn’t have THIS – it is irrelevant/psycho/adult autistic because it doesn’t have this” argument… Lots of big areas that we deal with in life that aren’t mentioned that much if at all in all literature – so it’s only noticed when missing in scifi/fantasy.

Uh, not going to waste time doing an essay on books from the 60s to 70s that predicted it quite well – cough cough “Shockwave Rider” anyone…?

Let’s go back to ’99 and I don’t mean 1999, let’s party like it’s 1899… H.G.Wells – “The Sleeper Awakens” Actually predicted NETFLIX on top of the internet. Wells reasonably predicted that telegraphy and photography would result in massive information transmission, storage and retrieval. One could -if of the rich class- with simple devices in the home have access to “any play ever performed in the last century” along with issues such as actors demanding royalties from replays of earlier acts, etc.

Also, Buck Rogers had it – Airlords of the Han, the second Nolan novel – same type of communication/service…

But the reason the Mainstream bashed sci-fi for “not predicting the internet” is that all the sci-fi stories they read really didn’t talk about it that much. The internet they knew then and there, that creaky noisy dialup, the expensive computers for slight colors, sound, the gross time wasted any hyped up optimisim… It was in the background and of course served the plot.

Well, which story would you want to buy/watch- A daring space ranger zapping BEM’s on Venus/Mars – or – two pimply faced teenagers on a Furry 3D online sandbox experimenting with virtual yiffing? I’m for the ray-gun zapping stuff too.

I did a scene recently that featured a huge feast – but I focused on how it reflected the sins (gluttony as the least of them) of the host and the creepiness of the situation – the hero, an inquisitor sent for a witch trial only to arrive with the witch burnt ahead of time… His noble host was on the edge of the decadence of Ancient Rome, renaissance beginning so less official power, had to talk first and wait for more evidence of wrongdoing, etc. So I focused more on describing the decadence of the situation while the Inquisitor ate simple food despite the available food as a sign of protest. This got mis-interpeted by the host, leading to another…situation. I described some food (imported oil) where it affected the plot later. Another story working on have a big feast too, again reflecting the decadence of the host, but again only a side thing to paint the background, no huge waste of texts on special foods/eating them/taste.

“Who can forget the scene in the Errol Flynn version of ‘The Adventures of Robin Hood,’ where he walks into Prince John’s supper banquet with a stag on his shoulders?”

If there’s a better banquet scene crashed by an outlaw with a stag on his shoulders who manages to floor two guardsmen with it than this, then I haven’t seen it.

@greengestalt: Great input. Story is king, no argument. And bad writing is bad writing. I made many of the points you raise here in earlier posts, and I think you and I are mostly on the same page.

@ Henry Ram: my point exactly. Thanks,