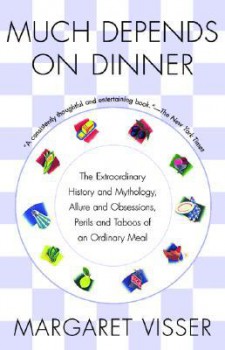 According to some people, I spend an inordinate amount of time thinking about food. That’s right, I’m one of those people who start planning lunch while we’re still sitting at the breakfast table. But, see, there’s a reason for that: something might need to come out of the freezer, or come in from the garden.

I also have a good grasp on where my food comes from. As a child, one of my aunts kept chickens in her patio, and we kids used to flush rabbits for my uncle and his friends to kill with sling shots – real slings, by the way, not catapults.

Now that I live in the country, I buy meat and cheese from the people who produce them – my neighbours. I also have a very large garden where I grow my own produce, and as it happens, there’s not a lot about freezing, canning, and preserving that I don’t know.

One thing’s for sure: it takes up a lot of time. And in a pre-industrial age – the time period that most of us use for our secondary world fantasies – it took up almost all of the time. So why don’t we see more of it in our books? Well, it’s just that, for most of us, how to get dinner, where dinner comes from, how to pay for it, grow it, etc. isn’t the story we want to tell – nor the story our readers want to read.

But as I’ve suggested already (and no doubt will again), this is information we need to know. Not doing this right – or not doing it or at all –  is the mark of an amateur. Sometimes, in our modern technological world, we’re so far removed from how the food gets produced, that we can easily make serious mistakes – or worse, overlook significant motivation – by not understanding where food comes from, and how it was produced in a pre-industrial age.

I said last week that it’s fairly straightforward to find out information – if you think to look in the first place. There are a couple of very handy books I can recommend myself – and I’m sure there are others many of you can tell me about.

I talked about how food and the need for it can drive plot, or be a motivating factor in the actions of characters. While you’re telling the story of a particular soldier/noble/mage/farm girl, you might want to touch on why the war is happening. Why are these armies on the move? Why is this land so important? Sometimes it’s as simple as who controls the source of salt or pepper.

Books like Michael Krondl’s The Taste of Conquest, or Mark Kurlansky’s  Salt: a World History, are particularly useful when it comes to  these large-scale ideas. Krondl traces how the need for – and therefore the value of – spices dictated the fates of Venice, Lisbon, and Amsterdam.

With Salt, we take a look at probably the most used and useful commodity in the history of humans. Nowadays we tend to think of salt as a flavour enhancer – and something we need to be careful of, since it can affect blood pressure – but it had a much more vital use in the past. Did you know that before WWII, 90% of the world’s salt was used for preserving food? You know what it gets used for now? De-icing roads.

Planning to have an extensive military campaign in one of your books? Better have a lot of salted meat ordered the season before. (By the way, this would be a dead giveaway of a king’s plans, if you’re a spy for the other side.)

But as I said, that’s for large-scale ideas. What about something closer to home? Margaret Visser’s Much Depends on Dinner looks at “the history and mythology, allure and obsessions, perils and taboos, of an ordinary meal.” Specifically, she looks at corn, salt, butter, chicken, rice, lettuce, olive oil, lemon juice, and, finally, ice cream. You can get a lot of ideas from knowing how people produced, prepared, and ate these everyday items.

Need some less everyday? Try Nichola Fletcher’s Charlemagne’s  Tablecloth, A Piquant History of Feasting. You’ll not only find out what got served, but how it was prepared and why.

Something not quite so elevated? Try Gervase Markham’s The English Housewife. Or even, Root Cellaring: The Simple, No-Processing Way to Store Fruits and Vegetables.

But what about cooking? If your characters are urban, they can either cook in their own homes (using open fires or stoves), or purchase ready-made items from public cooks, including bakers, and sausage-and-pie makers.   Remember that food is going to be purchased every day,  and can only consist of ingredients that would be available in that place at that time. Middle of the winter? Then we’re talking about root vegetables, and dried fruits – though some of those might be imported. Fresh meats and fish might be available, but they’d likely be rabbits, poultry, and fish kept in ponds. Anything else would be preserved by smoking, drying, or salting – and remember that pickling is a form of salting.

Keep in mind, as well, that people didn’t eat meat every day, and not necessarily because of poverty, but because there just wasn’t that much meat around. Especially beef. Do you know how much land it takes to grow beef animals? How much water?  Did you know that the poorer the community, the less likely they are to have pigs?

For that matter, do you know how much a horse eats every day?

By the way, Charlemagne’s tablecloth was allegedly made of asbestos. When it got stained or dirty, it was cleaned by throwing it into the fire. It’s known that such tablecloths existed, though it can’t be proven that Charlemagne himself definitely owned one. However, I gave one to my Mercenaries, Dhulyn and Parno, in The Solder King. They make fires on top of it while they’re travelling – and then go without leaving a trace.

You never know what you can use when you read a cook book.

A couple of my favorite food-history-related books: Swallowing Clouds (http://www.amazon.com/Swallowing-Clouds-A-Zee/dp/0295981911/ref=sr_1_1?ie=UTF8&qid=1366984784&sr=8-1&keywords=swallowing+clouds), which is actually more about using a Chinese restaurant menu to understand Chinese writing, and Curry, a Tale of Cooks and Conquerors (http://www.amazon.com/Curry-Cooks-Conquerors-Lizzie-Collingham/dp/0195320018/ref=sr_1_2?s=books&ie=UTF8&qid=1366984845&sr=1-2&keywords=curry) because, hey, Indian food!

Hi Joe, I’m familiar with the Curry one, though I haven’t read it yet as I’m not that big a fan of Indian food. Thanks for the intell on the other.

I agree a lot with the first half of this post. The latter is interesting. Back to the first half! I played the “All Quiet on the Western Front” card wih my long standing Swamp Rats (RuneQuest based) campaign. It worked well and helped our low fantasy gritty world to work.

So we moved along but we still keep the produce real. I try to make a mission of saying what’s local etc as the maniple travels and every now and then I get the odd (positive) comment of the “gourmet tour of (insert area here).”

End of the day everyone eats and if there is any sort of society said must have sufficient to have become such. Even if it means large flying lizards noshing hairless monkeys…

The nice thing is that if you know a bit about different kinds of cuisines, you can throw in a smattering of detail instead of just calling everything “heavily spiced”.

I do think of this stuff. I’m no farmer, but sensory detail is important and I want to know what characters are eating. Having a background in economics, I want to know how they are paying for the meal. Adventure fiction involves travel, and travel involves either foraging, carrying physical cash or other treasure, having some sort of oligarchic patronage or some sort of banking system (and a lot of money in it). Whatever the character does to eat strongly influences characterization, and any economic activity can put them within reach of social power manipulation.

Alex, I like your perspective. I talked about travelling and foraging in one of my earlier posts on food, but I only lightly touched on the economic aspect in hte larger sense of “why go to war?”
I agree that we can’t lose sight of economics on even the most basic level. Like food and drink, it isn’t necessarily something that directly drives the plot, but it is a necessary detail of characterization and world-building.
And it certainly can drive the plot if we consider what the characters do to get enough money to eat and drink.